Author, editor and game designer Monica Valentinelli (Tales of the Seven Dogs Society [1], Violet War [2]) introduces us to a different kind of mummy with her entry in the Halloween Horror series here are Flames Rising.

Artist Brad McDevitt contributes to the mystery with a bit of his artwork.

Created by Monica Valentinelli
With Art from Brad McDevitt 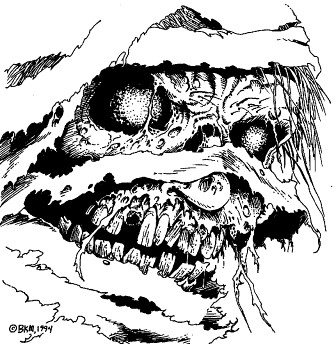 Deep in the heart of the desert, a circle of seven ancient Babylonian temples weathered by sand, stand testament to a forgotten age. Great stone wings adorn falling archways, covered with an undecipherable combination of script and hieroglyphs. There are no living priests in this hallowed place, no servants to call upon the gods and goddesses waiting in the heart of each gilded temple. There is nothing but the wind and the sand, blowing through abandoned temples and the resting place of the Babylonian gods and goddesses.

Kingu, the architect who created these temples, had achieved godhood by surviving 100 days and nights in the desert with no food, no water. Upon his return to these temples, the goddess Tiamat in her infinite wisdom elevated Kingu to godhood and gave him three Tablets of Destinies to help Kingu protect the other–more vital–four. Kingu was also given command of an army filled with mummies to fulfill Tiamat’s one decree, to hunt down and sacrifice every mortal listed on the second Tablet of Destiny. These poor souls, according to Tiamat, had no destiny and were deemed unworthy of life. So she branded the past, present and future names of those unlucky mortals that Fate ignored into the hearts of all mummies enlisted in Kingu’s army. Kingu, a simple man, issued a single decree to his vast mummy army: he instructed them to find every mortal name on Tiamat’s “list” and sacrifice their unpure bodies to the gods.

Bolstered by Kingu’s unwavering devotion to Tiamat, the mummy army dispersed to the four corners of the earth to fulfill their sacred duty. To this day, this army of immortal mummies hunts down and slaughters random names on a list branded into their hearts for eternity. Unfortunately, not one member of the mummy army has ever returned to the Temple grove, there has always been one more destiny-“less” mortal to kill. Ironically enough, as the ages passed Kingu, Tiamat, Marduk and the others gods and goddesses fell into a deep sleep, their enemies and worshippers gone with the passing of Time.

Different from their Egyptian counterparts, these Babylonian mummies are not cursed — as mortals they willingly chose to be in Kingu’s service to do his bidding, sacrificing their flesh and blood for the will of the gods.

An immortal mummy in Kingu’s army is a spirited, unquestioning zealot, a hunter whose power lies in their ability to continually regenerate and reanimate their flesh. Although the mummy’s true appearance is that of a wrapped, rotting corpse, this mummy has the ability to regenerate flesh quickly provided they come into contact with water. The older the mummy, the more water they must drink or submerse themselves in to retain their youthful appearance.

These intelligent mummies prefer to hunt their mortal prey under the cover of night, as they live on society’s fringe, unable to fit in with modern cultures. Their weapon of choice is a strange-looking triangular blade, wide at the base and sharp at the top, but will use whatever means necessary to honorably cut down their “sacrifice” to the gods. The mummy will stalk its sacrificial victim slowly and carefully for days, avoiding other innocents to prevent angering the gods. The younger the victim, the more quickly the mummy will strike their target down. The older their target, the more carefully the mummy will regard the mortal to ensure that they are not removing an unneedless threat, for even these mummies have learned that some mortals can take Fate into their own hands. It is rumored that the mummy has developed a strange sense of honor, they will never attack a victim from behind and, if necessary, will fight their target in a one-on-one match.

Always in constant, telepathic communication with each other, the mummy does not fear death yet prefers to work alone, hoping to fulfill their duty quickly so they can one day return to those ancient Babylonian temples. Their regenerative properties make them impervious to bullets and, if trapped, they can detach parts of their bodies at will to help themselves escape. To date, the mummy’s only known physical weakness is dehydration. It is rumored that once a Babylonian mummy becomes fully dehydrated, they will slowly turn to sand, and its brothers-and-sisters in arms will grieve.

Once the mummy has sacrificed its target, it will continue hunting down every name branded into its dust-filled heart until there are no more names left. It is said that once a mummy kills the last Fateless mortal within the present age, the gods and goddesses will wake up and use the Tablets of Destinies to end the world’s suffering.

About Monica Valentinelli:
In addition to writing reviews here at Flames Rising, Monica has written for over a dozen games for publishers including: Abstract Nova, Eden Studios, Spartans Unleashed, Rogue Games, and others. Her Promethean: the Created fiction was featured in the White Wolf eQuarterly [3] and her short story, “Prey” was featured on the Pseudopod.org website. Visit www.mlvwrites.com [4] for the latest information on Monica’s upcoming dark fantasy series “The Violet War [2]” and other projects.

About Bradley K. McDevitt
Bradley K. McDevitt is an RPG Illustrator and Graphic Designer, his clients include Wizards of the Coast, Postmortem Studios, Fantasy Flight Games, Mongoose Publishing and many more. He recently published a new game, Haiiii-Ya! [5], and you can find more of his art in the Clipart Critters [6] series.