Halloween Horror: Falling for Her

Today’s monster is brought to us by author Jess Hartley (Hunter: the Vigil [1]) and artist Jeff Preston (Key20 Games). This tale brings us a new twist on the legend of the succubus.

Created by Jess Hartley
With Art by Jeff Preston 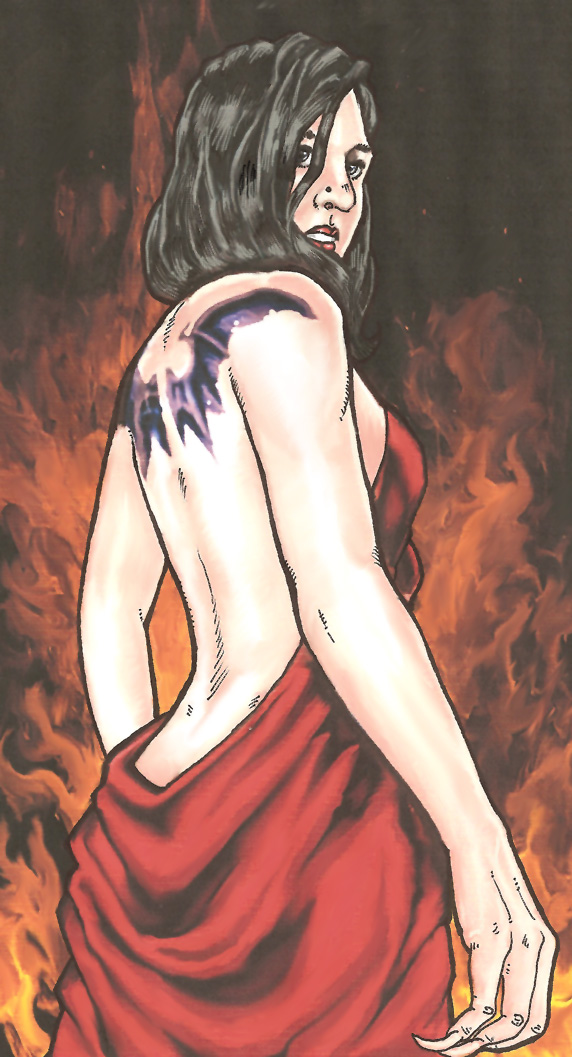 “Call it a birth defect,” she’d said, the first night they’d been together. He’d not stopped to ask more, too hungry for what she offered. And in the morning, she was gone.

Every night, he tried to ask her about it, that raw-tipped stub at the base of her spine. It seemed somehow important that he ask. But, although he knew everything else about her, every time he raised that topic she managed to change it, so swiftly and gracefully that it was the next morning before he realized he’d once again been distracted.

He knew she lived in the city, that she’d always lived in the city, and that she hated being out during the day. The sun hurt her eyes, she’d said, and anyway, she preferred the night life. She was an ultra-strict vegan, she’d claimed, so many dietary restrictions for “philosophical reasons” that she never ate anything anyone else cooked. Hell, in the weeks they’d been… was dating the right word? In the weeks they’d been together, he’d never seen her eat anything at all, although she drank whiskey like it was water when they were out at the clubs.

He looked down at her now, sprawled face down in decadent repose, the hotel’s Egyptian cotton sheet wrapped around her like some Roman Empress’ toga. She wasn’t sleeping, although her eyes were closed. He’d never really caught her sleeping, although after a particularly vigorous night of dancing and… other activities… she sometimes drowsed like she was now. He could see it, twitching there under the sheet. It reminded him of a stub-tailed cat he’d had as a child, a sadistic little predator who would remain stock-still, except for that tail twitch, as it watched a rodent-intruder edge ever nearer to its doom.

He knew how those rats must have felt, now.

He didn’t buy the “birth defect” answer any more. Maybe he hadn’t all along, but she was just too difficult to argue with, too difficult to think around, at least too think of anything other than getting her back somewhere alone. But now, body spent, mind still whirling, the pieces just didn’t fit. Every time he saw her, the stub was raw at the tip, as if never healed. As if it couldn’t heal. As if it had been freshly cut… As if something had been hacked off, just hours before. And by the end of the evening, it had always grown… longer, slim and whip-like. What the hell kind of birth-defect was a tail that tried to grow back overnight?

The sun was beginning to filter in through the floor-length lace curtains, slowly illuminating the elegant hotel room she’d encouraged him to book for them that night. He’d spent every cent he’d earned on her in the last few months, every penny and more. He’d cleared his savings, cashed in his 401-K, ran up his credit cards, then applied for more and maxed them out as well. This was it, his last splurge, and he knew it. She knew it too.

His eyes traced their way up from her curvaceous bottom, across the cotton-draped curve of her back and to that pouty-lipped, impossibly angled face. He wasn’t surprised to see her looking at him, those black-as-night eyes taking him in.

“You can have it now.” His voice broke the silence that had fallen on the room since she’d worn him out an hour or more ago.

“Have it? Why, whatever do you mean?”

“My soul. You can have it now. I know you’re a demon, but… it just doesn’t matter. I love you, and I’m okay with that. You can take it. Just don’t leave me.”

She chuckled, and her voice, as always, was the sound of sin. “Oh. That’s just… adorable. Truly.” She sat up, the sheet dropping to reveal flawless skin so pure and white it put the expensive bed linens to shame.

“Adorable? But… I just offered you my soul!”

“My dear,” she said raising one crimson-taloned hand in protest. “You can’t give me what I already own. I’ve had your soul from the first night we met. You promised to me in the throes of passion. I’ve only been around this long because you amused me.”

She nodded, chuckling again. “Of course you did. And now, I want you to do me a favor…”

“Anything!” he heard himself answer, before she’d finished the request. He sounded desperate, even to himself.

She flicked her hand towards the window, gesturing to the panoramic view of the city the penthouse room afforded them.

The window must have been treated to prevent such a thing, he thought. Suicides, murders, accidental falling. It had taken him nine tries, each one accompanied by the sound of breaking bones and pain like he’d not known possible. But he’d done it. He’d given her what she wanted.

And, as the concrete rose up to meet him, he smiled at the sound of her laughter accompanying him all the way down.

About Jess Hartley
Jess Hartley is a novelist, writer, and freelance writer/editor in the gaming industry. Her first novel, In Northern Twilight, was a Runner-Up for Pen & Paper’s 2004 Fan Awards in the category of Best RPG-Related Novel/Anthology. Jess has co-authored or developed almost two dozen roleplaying games and rpg supplements for White Wolf Game Studio. Visit www.jesshartley.com [2] for more information on her latest projects.

About Jeff Preston
Jeff Preston is a Freelance Illustrator who has been doing concept art and quality interior art and a few covers since the early 21st century. His first gig was for Key20 for a Halloween Special in 2002 with a deadline of four hours. Since then, Jeff has been producing art under deadlines consistently, building a reputation as the go-to guy for artwork to order, with no guff, and always on-time!

Visit www.team-preston.com [3] for a look at his gallery and upcoming projects.