The Heamogoblin is a mischievous little beast. You have to wonder if they are related to Gremlins or something far, far worse…

Created by Gregor Hutton
With Art by Bradley K. McDevitt

Brad put Tara on the hallway stairs, she was a bloodied mess. He made his way in to the kitchen to see what she’d done to herself. Bloody footprints, like those of a rat, led from a smashed tumbler to under the sink. A tumbler? All the blood that only moments ago must have jetted from Tara’s arm was gone. It looked like it had been licked clean from the slate floor. Rats? 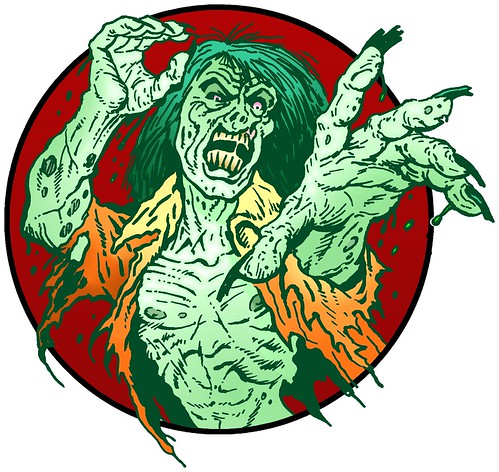 This vindictive little self-centred sprite lives wherever there are people with good souls. The HaemoGoblin moves himself into their home and feasts upon his prey until they either up and leave, or die as a result of his meddling ways.

A short, wiry figure with stiff hair, pointed ears and a crescent-like face the HaemoGoblin is truly an ugly beast. Its visage almost seems drawn in black and white like a badger, except when he is feasting on blood when he wears a slick crimson smile.

Two things sustain the HaemoGoblin. Most obviously: blood, and human blood at that, and hence the creature’s name. Less well-known is his need for misery. Without either of these things the HaemoGoblin will grow weak and die – an inglorious end for such a pitiful little wretch. Fortunately for the HaemoGoblin, he is adept at helping himself to both these necessities in goodly amounts – often from optimistic people of good heart.

Signs of a HaemoGoblin settling in a home are subtle, but detectable to the trained eye: Arguments breaking out between friends, awkward silences, sudden injuries with broken glass, and accidental cuts in the kitchen. All classically the sign of his Goblin magic designed to increase misery and give him access to fresh blood. In modern homes he will lurk under the sink sifting blood from the detritus being washed down the plughole. Common folk will write such things off as “bad luck” or blame the sticky bloody footprints on rats or other vermin. To do so is foolish and it is underestimating the evil that now lurks in their home.

Capturing and slaying a HaemoGoblin is hard. It can be tempted out of its hiding places by starving it of its much-needed sustenance – parties or joyous occasions are something that he can’t resist ruining. When he appears the slayers must hold fast and not allow him to cause arguments amongst the group, and he will try with all his Goblin magic. Lastly, you can’t afford to be cut near him or he will pounce on the open wounds regaining his strength at a staggering rate.

About Gregor Hutton
Gregor Hutton lives opposite a cemetery in Edinburgh, Scotland, so his neighbours are generally quiet. Gregor’s most recent game is 3:16 Carnage Amongst The Stars [1] which debuted at GenCon 2008 in Indianapolis to much acclaim.

About Bradley K. McDevitt
Bradley K. McDevitt is an RPG Illustrator and Graphic Designer, his clients include Wizards of the Coast, Postmortem Studios, Fantasy Flight Games, Mongoose Publishing and many more. He recently published a new game, Haiiii-Ya! [4], and you can find more of his art in the Clipart Critters [5] series.