The Shotguns & Sorcery: The Roleplaying Game by Matt Forbeck is now available! 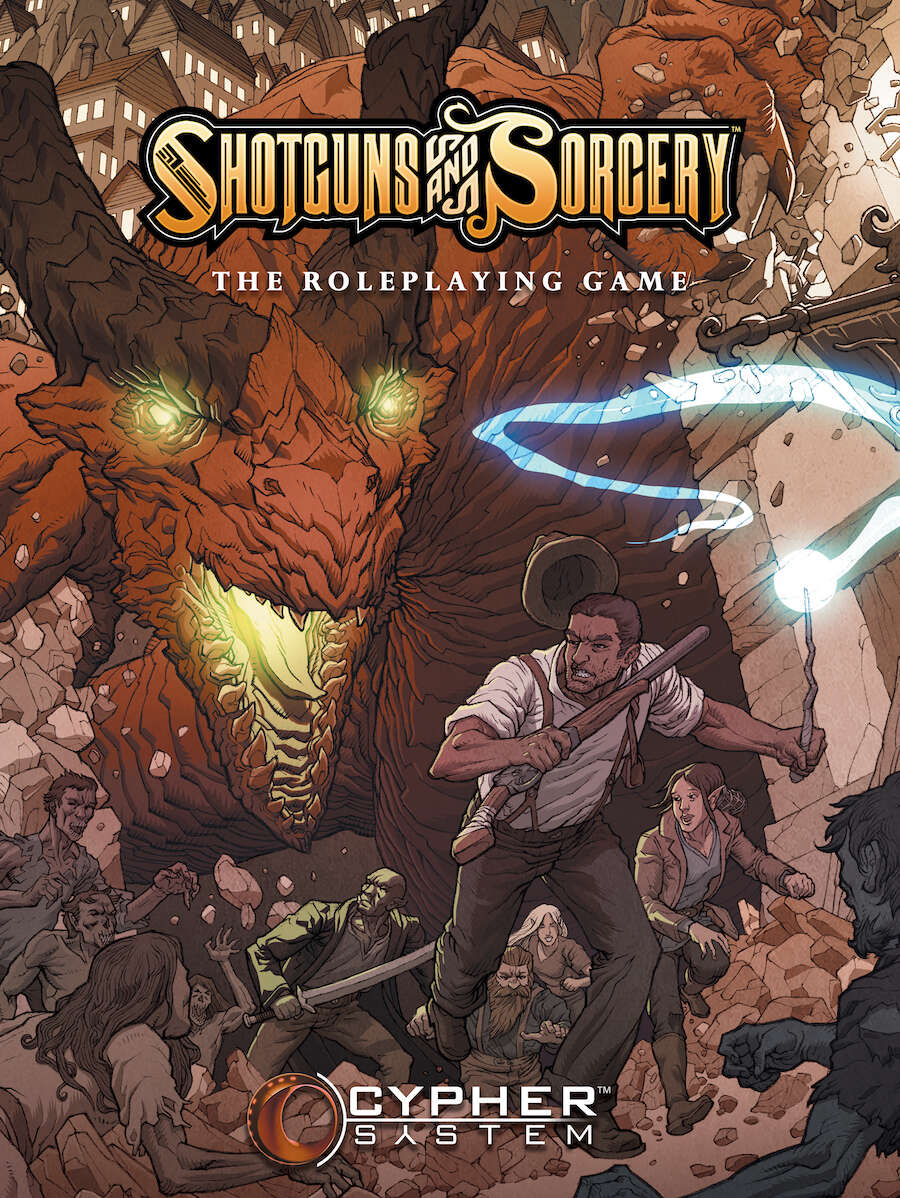 Welcome to Dragon City, a grim, gritty metropolis ruled over by the Dragon Emperor, with legions of zombies scratching at the city walls by night.

Whether in the streets of Goblintown or the prestigious halls of the Academy of Arcane Apprenticeship, people try to scrape by, make a living, and survive from one day to the next. You, however, are looking for something more than simple survival. And in this city, if you don’t make your own adventure, another adventure is sure to find you.

No matter if you are playing as your favorite character or unraveling their mysteries for the first time, this hardcover, 276-page core book — packed with tons of full-color artwork from Jeremy Mohler and friends — includes all the rules for game play, allowing you to explore Dragon City and its outskirts as never before.

Based on the fantasy noir novels of bestselling author Matt Forbeck and powered by Monte Cook’s Cypher system — written by Forbeck, with rules by legendary game designer Robert J. Schwalb — Shotguns & Sorcery: The Roleplaying Game [1] contains everything you need to launch your campaign.

Grab a wand, a shotgun, and hold on tight to your flying carpet. It’s going to be a bumpy ride.

Shotguns & Sorcery: The Roleplaying Game is available in PDF and Hardcover formats at DriveThruFiction.com [1] and DriveThruRPG.com [2].

Every night, legions of zombies scratch at the outer walls of Dragon City, trying to claw their way into the grim and gritty metropolis ruled over by the Dragon Emperor, the mighty beast that keeps the hordes of hungry dead from storming the place and tearing it to the ground. Inside, ex-adventurer Max Gibson — now “Freelance” — tries to keep his head down and enjoy his early retirement, but something keeps digging up parts of his long-buried past.

First he has to rescue an old pal from murder charges. Next he has a run-in with the corrupt Imperial Dragon’s Guard and the dwarven mafia that run the city’s under-mountain. After that, things get much worse, and Max soon finds himself wrapped up in a plot that involves the Dragon Emperor’s young offspring and the fabled leader of the undead hordes herself, the legendary Ruler of the Dead.

With the fate of Dragon City and all its occupants in his hands, what will Max do? Who does he truly care about? And what is he willing to destroy to protect them?

Plus, a brand-new story written for this book:

Shotguns & Sorcery: The Omnibus is available in eBook and Print formats at DriveThruFiction.com [3].