Flee in Terror with Innsmouth Escape! 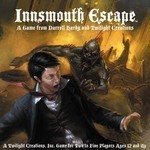 In Twilight Creations’ board game Innsmouth Escape, one player takes on the role of the human trying to free her friends and flee from the accursed town infested with frog-like worshipers of Cthulhu, while the rest play the nefarious Deep Ones themselves, intent on keeping their dark secret away from the prying eyes of outsiders.

The board is a simple six-by-six grid. Some of the squares are marked with symbols indicating places to rescue human captives, obtain equipment and have encounters (all for the human player) and to spawn Deep Ones, summon a Shoggoth (more on that later) and draw cards for the Deep One player(s).

The object of the game for the Human player is to spend a full turn with her pawn in a space on either the western of southern edge of the board, while having at least eight victory points in hand. Victory points are gained by rescuing human captives and by holding any of several encounter cards that are worth victory points. The Deep One player(s) win if they kill the lone human.

The Human player moves using a series of three cards chosen from a deck of nine cards. As the cards are used they are set aside, limiting the Human player’s movement options until all nine cards have been used, in which case the deck is reshuffled and the player again has a full slate of movement options. In this case, options are moving one, two or three spaces. Movement is entirely at right angles – like a rook in chess — so changing direction can be tricky and requires planning. I liked this mechanic a lot; the human player often has many options, but finds herself limited from time to time as well. Except for the occasional break to rest and heal, the Human player must keep moving at all cost; once boxed in by Shoggoths, it will be difficult – if not impossible — to escape.

Shoggoths; the Cthulhoid creatures we love to love. Giant masses of protoplasm, Shoggoths are formidable and terrifying foes. In game terms they effectively block a space so the human player cannot pass through them, save with the use of special equipment cards. The Deep One player must summon as many as possible early and use them to restrict the Human player’s movement, potentially even boxing the human into a corner. There is apparently no way for the Human player to kill a Shoggoth, which follows the mythology pretty closely. This tenacity goes a long way toward counteracting the fact that the Deep Ones in Innsmouth Escape die after they attack. Deep One spawning is a critical and ongoing need for the Deep One player. The Deep One players must co-ordinate their efforts closely to have a good chance of winning; wearing the human down works well, but preventing her from moving effectively is better. Using both in concert can be a winning strategy for the foul fish-people.

Designed by Darrell Hardy, Innsmouth Escape is a heavily card-driven game, which is neither a bad thing nor good. What is important is that both sides are subject to the luck of the draw, which can have a powerful impact on the game. Even the best-laid strategy turns sour if the other side has the right cards to counter any moves you make.

Several things come to mind on playing this game. First, it reminds me of the old classic board game Scotland Yard by Ravensberger, and seems weighted towards the human player. I managed to win playing the human despite several blunders, not the least of which was miscalculating my ending space more than once! All in all, Innsmouth Escape is a fun, challenging game. Replay value is solid (particularly for Lovecraft aficionados) and the game is reasonably well balanced. It’s a game for two to five players ages 10 and up, and is playable in 60 to 90 minutes. At a $39.99 suggested retail price, Innsmouth Escape is a bit pricey, but Lovecraft fans will very likely find it well worth the money.