I was very attracted to the question of what the Gelfling world was like before the time of the film. It was such a lush world populated by so many different creatures — all who still had the blinders on about the Skeksis. I was invigorated by the opportunity to build out the world that existed, truly, in the Gelfling age of wonder. 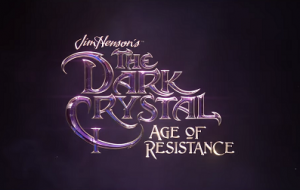 The Dark Crystal: Age of Resistance is told entirely with puppets, which is a huge undertaking to do production-wise. Did that factor into your script writing at all? Did you have any limitations or things to watch out for?

During the initial story break, Louis Leterrier (the director) actually asked us to stop thinking about puppets and really focus first on imagining the best story we possibly could – without worrying about whether it would be possible with puppets. I think in the end, although much of this was revised to accommodate what was physically possible, it allowed us to think outside the puppet and push us narratively into places we might not have otherwise gone.

In the telling of the history of how the Skeksis came to be, we watch a puppet show performed by puppets. This is one of the ‘meta’ scenes in the whole show. Why would the Skeksis and urRu choose a puppet show to tell this story?

I thought this scene was just brilliant. I can’t speak to the characters’ motivations, but I can say that the moment the idea of a puppet show came up in the writer’s room, Louis immediately brightened. Everyone was excited about it. Everyone working on Age of Resistance was influenced by the puppets of The Dark Crystal; it was instantly obvious to all of us that an homage to puppetry within a puppet production had to be done.

In 2019, it’s easy to see Skeksis among those in power. What parallels did you subconsciously or consciously write into the Age of Resistance?

I’d rather leave a lot of the commentary to the viewers, but what I will say is that the writer’s room was active in spring/summer of 2017… and it shows.

In the documentary The Crystal Calls, we find out you created the podling language. The language was spoken a bit in The Dark Crystal movie. How did you go about building the language based off the small amount we heard used?

When constructing Podling, I started by simplifying the sound set that we hear in the original film and building from there. On top of the sound catalogue I added syllabic rules, declension and conjugation tables, etc… and of course, a dictionary. Basically I wanted to capture some of the same sounds fans were familiar with from the original film, but construct a wholly original language for Age of Resistance that could be used throughout the series and into any future productions that might need Podling.

What was it like working with the Hensons and the writing team for Dark Crystal: Age of Resistance?

No one works on The Dark Crystal without having a true, unabashed love of it. From the team working on the YA novels to the comic book series, all the way to Age of Resistance, every person touching the project is enamored with the Gelfling, the Skeksis, Aughra, Thra — all of it. That shared adoration and respect for Jim Henson’s original vision defined and guided every step of the collaborative process.

Working within a license like The Dark Crystal can be very challenging when dealing with all of the lore that has been built up over the years. How did you manage all of the lore in your writing?

All canonical lore created for The Dark Crystal – even that which was created for projects and treatments which were never produced – is archived and cataloged, which gave me a really solid jumping-off place when I began developing the four YA novels. On top of that, everyone involved both in the books and in Age of Resistance is very knowledgeable about the deep lore that’s been created over the years. When I came on to the project, I tried my best to maintain the tradition of such good housekeeping by storing notes in glossaries and appendices. 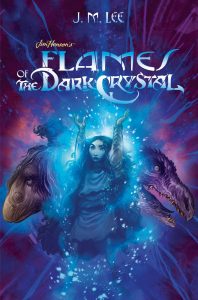 There was a vast wealth of worldbuilding already done from previous treatments and publications, which I was fortunate enough to inherit when working on the YA novels; the overview of the clans, the scope of the world, etc. Equipped with that, my main task was to develop the Gelfling clans in this prequel world — how they lived, how they were different from one another, how they were the same.

One of the major ways I, with the support of the Henson group, did this was by committing to a few cultural landmarks. For example, we decided that the majority of Gelfling lore is in the oral tradition. So what does this mean about the world? It means stories are important; songs are important; music is important. Names and words are important. It means that the role of the Song-Teller among the Gelfling is an important one, respectable. It means that reading and writing are special skills that only a few Gelfling have, and so on. So while this built out some of the magic and skills that only Gelfling have (such as dream-etching), it also remained a relatable element of the world to a human audience.

The lore surrounding The Dark Crystal (1982) has grown a lot over the years, with your novels, where do the Shadows of the Dark Crystal series fall in regards to the movie and Age of Resistance?

The YA novels take place during the same time frame as Age of Resistance; both are prequels focusing on how the Gelfling react to discovering the Skeksis’ betrayal. While the books follow the paths of a Gelfling leader, Naia, and her journey to rally the Seven Gelfling Clans, the series centers on Rian, a castle guard who was the first to see with his own eyes what the Skeksis had done. There’s a lot of character, plot, and event overlap between the two series, though of course, each has something special to offer.

Writing for a series is very different from writing a novel. What was the biggest obstacle you had to overcome in switching writing styles for Dark Crystal: Age of Resistance?

I was nervous writing for the screen since almost all of my experience is in manuscripts and long-form, but I was relieved to find that the collaborative story breaking process in the writer’s room for Age of Resistance was very similar to the process that I am familiar with in collaborative novel writing. So really the biggest obstacle for me in writing for the series was in delivering a script that the showrunners could use – it was sort of like giving a seminar in a language you’re only partially fluent in. I know that I know the subject matter, but translating it into a format that isn’t my usual one was challenging. 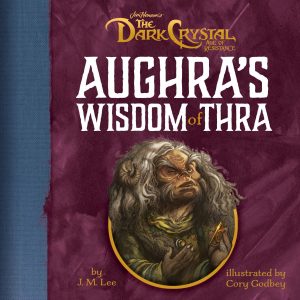 Aughra’s Wisdom of Thra was a really fun piece to work on. It’s a collection of Aughra’s proverbs and wise nuggets, paired with rich, full-bleed illustrations by Cory Godbey (who also illustrated the YA novels). One of my favorite things was writing in Aughra’s perspective, which has such a distinct tone and plain gruffness while simultaneously expressing these profound and abstract concepts.

Heroes of the Resistance is a character guide geared towards younger fans of Age of Resistance. It has trivia about the characters and a great selection of stills and photographs from the show.

We all start somewhere in our careers. For those of us who also write and tell stories, we’re wondering how did you get into writing? What else have you worked on?

I always knew I wanted to write novels and other long-form projects, so I went the traditional route of signing with an agent as soon as I found the right person. While we were pitching my first manuscript, I started getting into IP and collaborative projects, which included The Dark Crystal. We just sold my first novel-length, non-IP project — a historical fantasy titled The Nightland Express — which will publish in 2020.

Where can we find more information about you and your upcoming books?

The best place for news and updates will be social media, so either (J.M. Lee on Facebook [5] or @joeyverse on Twitter [6].

[2] Heroes of the Resistance: A Guide to the Characters of The Dark Crystal: Age of Resistance: https://amzn.to/2kU4j4w

[7] Talking About the Dead (and Undead) with James Lowder : https://www.flamesrising.com/talking-dead-with-james-lowder/

[10] Jeremy Jones talks to James Lowder about “Worlds of Their Own” : https://www.flamesrising.com/james-lowder-woto-interview/