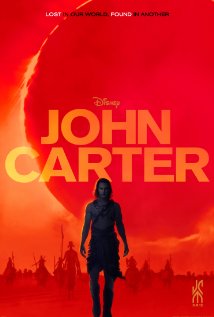 Before he secured his place in the annals of international pop culture with the Tarzan stories, Edgar Rice Burroughs offered up the initial adventure in the far more interesting and inventive Barsoom series. “Under the Moons of Mars,” later to be retitled A Princess of Mars for book publication, first saw print in the Munsey pulp The All-Story, from February through July of 1912. The six-part serial chronicles the adventures of Confederate veteran Captain John Carter, who stumbles across a cave in Arizona through which he is transported via psychic projection to Mars, or as the locals call it, Barsoom.

Once deposited on Barsoom, Carter treks across the dying planet and encounters an imaginative assortment of races and creatures, from the four-armed warrior Tharks to the super-speedy dog-lizard things called calots (one of which, naturally, becomes the hero’s faithful companion), to the humanlike red Martians. The earliest parts of the story owe much to the fantasy travelogue tradition, with Carter as the outsider narrator relating the wonders he encounters. He eventually becomes enmeshed in local political intrigue and broader military conflicts in order to protect the beautiful Dejah Thoris, princess of the city-state of Helium. Fortunately for Carter, the differences between the gravity on Mars and Earth leave him capable of superhuman feats that make him more than a match for the local monsters and madmen.

The script for the new Disney film does a fairly good job of capturing the spirit of the original novel. It lifts a significant part of the plot from A Princess of Mars, though director Andrew Stanton (Finding Nemo, WALL-E) and co-writers Mark Andrews and novelist Michael Chabon complicate things needlessly by adding in the godlike Therns from subsequent entries in the Burroughs series. While this presents a lot of good opportunities for CGI shapeshifting by the Thern baddie Matai Shang (Mark Strong), it muddies the story and robs secondary villain, Zodanga warlord Sab Than (Dominic West), of most of his menace. West doesn’t do much with the scenes he’s given anyway, but he might have been able to make a better showing as Than if the audience had been allowed to think of him as anything more than an oblivious puppet filling time before either the Therns or Carter cut his strings.

As the title character, Friday Night Lights alum Taylor Kitsch fares a lot better. Some of his screamed dialogue sounds more strained than stirring, but he makes the rebellious hero worth rooting for. He’s at his best when sharing the screen with Lynn Collins. She’s terrific as the smartly updated Dejah Thoris. While often relegated to the role of pretty hostage in the Burroughs novels, the princess is now both a scientist and a swordswoman to be reckoned with. Only in the final battle does she find herself regressed into her helpless old self, with Carter repeatedly leaping to prevent her from plummeting to her death. Still, Collins is the picture’s real standout, and if John Carter manages to connect with audiences, she’ll deserve the banth’s share of the credit.

Not all the updates are as successful as the transformation of the princess from plot device to action hero. The fifteen-foot-tall Tharks are rendered effectively through CGI. They look great. But Stanton saddles Tars Tarkas (voiced by Willem Dafoe) and his horde with too much comic business, such as aped military salutes. Even the initially amusing bit where the warriors mistake Carter’s home state—Virginia—for his name is trotted out once too often. This reduces the Tharks to stereotypical noble, if somewhat silly savages, rather than allowing them to stand as strange and insectile—alien, as they should be.

With all these problems, it’s something of a surprise that John Carter holds together enough to be truly entertaining. After a stuttering start and more than its share of stumbles, miscues compounded by an occasionally ham-fisted score by the usually reliable Michael Giacchino (Up, The Incredibles), the film manages to rope viewers in through its sincerity and the sheer power of some of its sequences. Of particular note is Carter’s one-man stand—well, to be precise, one man and one calot—against an onslaught of mounted Warhoons. Stanton brilliantly cuts between the fierce, frantic battle and flashbacks of Carter alone, facing a tragedy in Virginia, with the end result being one of the best fantasy combat sequences ever put on film.

Much has been made of John Carter’s bloated $250-million-dollar budget and the studio politics that have poisoned its advance press. In the end, John Carter is not a great film, but a solid piece of fantasy filmmaking that deserves an audience. Perhaps the most regrettable thing is that this imagining of the classic Barsoom series has all the earmarks of a potentially winning movie franchise. Even after two hours of mentally cataloging the places where it tripped up, I left the theater hoping that there would be a sequel. That’s quite a feat for such a flawed work. Perhaps it has something to do with the gravity on Mars.