FlamesRising.com is pleased to present you with a peek inside GURPS Horror 4th Edition from its author, Kenneth Hite. For those of you familiar with his work, you might suspect Kenneth Hite is no stranger to writing about all things dark and terrifying. In this essay, Ken talks about the additions and influences he infused into the new edition.

A New Millennium Of Horror, And Of GURPS Horror 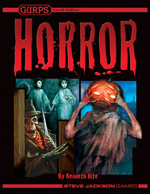 [1]I started writing the Third Edition of GURPS Horror in very late 2000, right about the time that Final Destination, Scream 3, and Urban Legend: The Final Cut were finishing off (with one or another degree of skill and chill) the horror boom of the 1990s. No, wait, I lie. I actually started writing the Third Edition of GURPS Horror in 1998, only I called it Nightmares of Mine at the time, and I was writing it for Iron Crown Enterprises. So I began writing it during the Indian summer of clever, self-referential horror: The Faculty, Fallen, and Gods and Monsters were all part of that horror year. By the time I finished it, Iron Crown had gone bankrupt, and I had folded pretty much the entirety of the horror-gaming advice from Nightmares of Mine into GURPS Horror, Third Edition. Speaking of going bankrupt, Gus Van Sant’s Psycho and Jan de Bont’s The Haunting remakes both came out in 1998. But drawing on the arch, referential tone of the era, I wrote a book of arch, referential horror advice, full of symbolism and structuralism. It was no I Know What You Did Last Summer, but I thought it was pretty good.

What I didn’t know then was that I was going to get another bite at that poisoned apple; a chance to write, revise, and expand GURPS Horror for GURPS Fourth Edition. What I also didn’t know then was that I’d been writing GURPS Horror Third Edition during the beginning of the next great boom in horror: J-horror. I think I saw Uzumaki (2000) the same year GURPS Horror Third Edition (2002) came off the presses, and the same year that Gore Verbinski remade Ringu as The Ring — successfully! That year, Resident Evil and 28 Days Later revived the zombie flick. The new millennium in horror was off and running, mostly away from zombies. So by the time I started work on GURPS Horror Fourth Edition, I had a lot of new ground to cover.

Sean “Dr. Kromm” Punch, my long-suffering editor (Saw (2004); Hostel (2005)), cleared the decks for me to expand the book’s word count by about 40%, over and above the new rules for the new edition of GURPS. In went guidelines for J-horror and survival horror. In went new rules for Panic Disorders, more phobias, more corruption and degeneracy, and new rules for going mad and collapsing, tunable for gritty realism or Gothic symbolism as you wish. In went a very nice set of rules for fighting zombie hordes, which came out of the playtest almost intact. Likewise, Dr. Kromm pushed for a solution to the worst thing about horror in the new millennium (no, not Paris Hilton in House of Wax) — cell phones, so I added about six or seven. I added a lot more monsters, especially from Japan and India, where a lot more of our horrors were coming from this millennium — but I also added the first monster ever, the child-killing lilitu of Akkadian myth. Finally, I added something for Team Stephenie: guidelines for romance and horror, and a template for the Handsome Stranger. I think that template (Twilight (2005); Dexter (2006-)) may have been the last major thing I added.

In short, I wrote a book of horror advice full of long shots, darkness, lobotomies, and lots and lots of monsters. It’s no Let The Right One In, but I think it’s pretty good. I don’t know yet what I didn’t know last summer. Ask me in ten years.

Kenneth Hite is an author of the best introductory primer (Cthulhu 101 [2]), the second-best roleplaying game (Trail of Cthulhu [3]), the fourth-best book of criticism (Tour de Lovecraft: the Tales [4]), the best alternate comics history (Adventures Into Darkness), the fourth-best Tarot treatment (Tarot of Cthulhu: Major Arcana), the seventh-best RPG supplement (Delta Green: Targets of Opportunity), and the two best children’s books (Where the Deep Ones Are and The Antarctic Express) about the Cthulhu Mythos. He has also written 70 or so books and games that barely touch on Cthulhu at all. He blogs, if you can call it that, at PrinceofCairo.livejournal.com [5].