Kickstarter has gone to the dogs with Pugmire

Be a Good Dog. Protect Your Home. Be Loyal To Those Who Are True.

These are the words of the Code of Man. Dogs have inherited the world, building the kingdom of Pugmire thousands of years after the Ages of Man. These dogs have been changed to use tools and language, and they (along with other races of uplifted animals) seek to rediscover the world they’ve inherited. Some dogs use the leftover technology of humanity, but they believe it all to be magic handed to them by their dead gods. Others seek to create an ideal civilization, using a Code of Man compiled from ancient, fragmentary lore. The world is dangerous and mysterious, but courageous and loyal dogs will persevere.

Pugmire is a light-hearted and family-friendly fantasy world. It’s one of the first of Onyx Path Publishing’s creator-owned games, produced in a partnership with Eddy Webb and Pugsteady.

The Kickstarter [1] has already blown past the original funding goal and is well on its way to achieving a number of exciting stretch goals that not only enhance the game itself, but add new media options for fans of the setting.

Eddy Webb sat down with Flames Rising to talk a bit about the Pugmire setting and what is going with the Kickstarter project.

What can you tell us about the world of Pugmire?

A. Pugmire is a fantasy game set in the ancient future of our own world. Dogs have inherited the Earth, building the kingdom of Pugmire untold years after the Ages of Man. These dogs have been changed to use tools and language, and they (along with other races of uplifted animals) seek to rediscover the world they’ve inherited. Some dogs use the leftover technology of humanity, but they believe it all to be magic handed to them by their lost gods. Others seek to create an ideal civilization, using a Code of Man compiled from ancient, fragmentary lore.

What kinds of characters do you play in the game?

EW: They play dogs! Particularly, they play adventurous dogs that go out and explore the world. They fall into callings that determine their role in society and in their adventuring parties, such as the devout shepherds and the noble guardians. Some have mastered magic — or at least, what they believe to be magic — while others wield ancient relics left behind by the Old Ones. Many of them work for the Royal Society of Pioneers, but there are all sorts of adventures that courageous and loyal dogs can get into.

What have been the most requested character breeds?

EW: There have been all sorts of breeds, some of which I’ve never heard of before! The nice thing about Pugmire is that players can play any breed they desire, but certainly there have been a couple of fan favorites. Aside from pugs (of course), a lot of people seem very excited about corgis.

What kinds of adventures or quests will the characters have?

EW: There are a lot of possibilities. There are villages to protect from monsters. There are relics to be rescued from ancient towers. There are terrible injustices to overcome. There is food to steal for a poor but well-meaning family. There are political maneuvers from the cats to thwart. But generally, it’s assumed that the dogs are exploring, uncovering lost truths and confronting ancient evils in the ruins of the world. 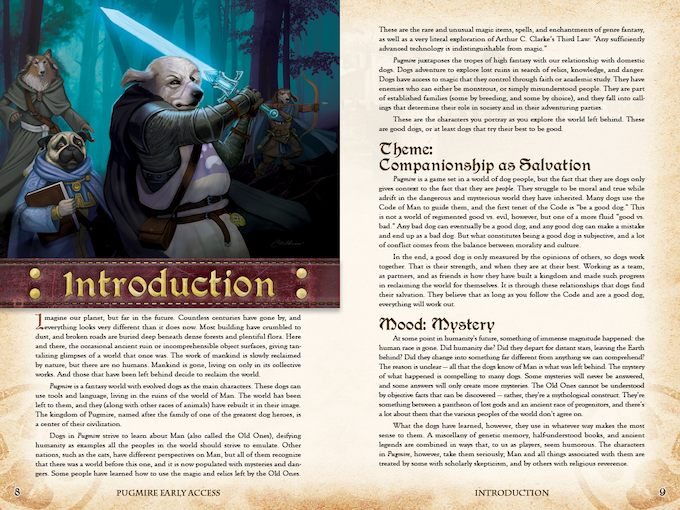 How are characters rewarded beyond XP?

EW: I actually don’t have experience points in Pugmire — characters go up in level at the end of an interesting story or series of stories. However, characters can earn tokens of something called “Fortune” if they are clever, entertaining, or play up their personal flaws. That Fortune becomes a resource that anyone in the group can use to reroll dice or power some of their special abilities (called “Tricks,” of course). So the whole group really gets rewarded!

What were your inspirations for Pugmire?

EW: I’ve had a wide variety of influences. Unsurprisingly, the early Dungeons & Dragons material (like Expedition to the Barrier Peaks) was inspirational, along with early Gamma World. Outside of roleplaying games, I’ve been inspired on the animal side by things like the movie “The Secret of Nimh,” the comic “Rover Red Charlie,” and the anime “Ginga: Nagareboshi Gin.” On the fantasy side I drew ideas from the Fafhrd and Gray Mouser stories all the way to the cartoon “Thundarr the Barbarian” — even by some elements of Doctor Who (“The Face of Evil,” particularly). One late influence that I found after I started was the “Redwall” series, which I’m really glad I discovered!

What can you tell us about your playtests for the game?

EW: I’ve been playtesting Pugmire for a little over a year, and so far the playtests have been great! The system has dramatically improved based on the feedback I’ve gotten, along with being able to watch other people use the system. I’ve also learned a lot about the flow of the game by running it myself, which is subtle but important as well. But more importantly, it’s helped reinforce that many of my instincts on the core design of the game are good, and that Pugmire is as entertaining as I imagined it would be.

Pugmire fiction and an audio drama? What can you tell us about those?

EW: One of the things I’m very passionate about is the fact that Pugmire can be more than just a game — it’s a whole world for people to explore. As soon as the Pugmire Kickstarter was announced, in fact, I had a number of talented writers contact me about writing stories in this world. It was an easy decision to start putting together an anthology of stories, allowing writers to play in my world.

But more than that, I love audio drama. Not just audiobooks, where a single narrator reads the text, but full cast dramas with sound effects. There’s an intimacy that comes with audio that’s hard to match in other media, and it’s an art form that’s making a comeback with the rise of podcasts and high-quality voice acting in animation and video games. It’s one way to show that Pugmire has the potential to be something really special.

And I’m particularly pleased to mention that we’re going to try and work on an INTERACTIVE audio drama as well! It’s something special that a company called “Earplay” is developing. I happen to be the executive producer there, but I think it can be a whole new style of interactive storytelling. And having someone like the legendary Dave Grossman (who worked on great games like “Secret of Monkey Island” and “The Wolf Among Us”) working with me on Pugmire is immensely exciting.

The Flames Rising crew wants to thank Eddy for taking time out of the hectic schedule that comes with running a Kickstarter project for this interview. Find out more information and support this project at Kickstarter.com [1]!

[3] Matthew Dawkins is infected with the Contagion Chronicle : https://www.flamesrising.com/matthew-dawkins-is-infected-with-the-contagion-chronicle/

[4] Live, fight, and love on Mars, talking about Cavaliers of Mars with Rose Bailey : https://www.flamesrising.com/live-fight-and-love-on-mars/

[5] Talking About the Dead (and Undead) with James Lowder : https://www.flamesrising.com/talking-dead-with-james-lowder/