The Last Lovecraft: The Relic of Cthulhu Mini-Review and Trailer 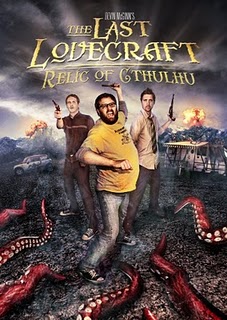 I just had the chance to watch The Last Lovecraft: The Relic of Cthulhu and I was impressed! For an independent film (one that has also won a couple of awards, I might add) this is an awesome film. What’s it about you ask?

Well, there is a story to be told here and quite honestly, the reason why this is a mini-review is because I really don’t want to spoil it for you. I feel this is the type of film you have to discover… laugh out loud… groan… And realize the costuming is just that much better than Mighty Morphin Power Rangers or The Keep.

Part of what makes this movie strong is the characterization and the nerdly discussions, but there are some other surprises hidden between the script’s pages. There is a lot of attention to graphics and pacing in this film to ensure you’re getting the biggest bang for your proverbial buck. Sure, there is some special effects… But they’re lovable, forgivable, decent special effects that enhance the theme as opposed to work against it.

Maybe, after watching this film, you too will think twice about becoming a cultist… The film is available to purchase through Amazon.com, but you can also find it streaming right now on Netflix.

Watch the trailer for The Last Lovecraft: The Relic of Cthulhu on YouTube! [2]

[2] Watch the trailer for The Last Lovecraft: The Relic of Cthulhu on YouTube!: http://www.youtube.com/v/QOWtgLneeNE?version=3&hl=en_US

[3] Cthulhu Goes to the Movies : https://www.flamesrising.com/cthulhu-goes-to-the-movies/