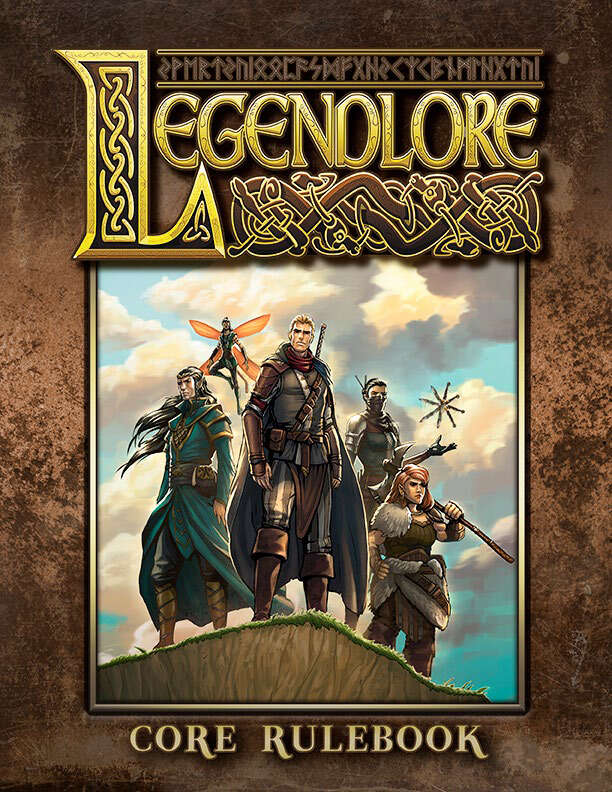 — Silverfawn to Marjorie after her first healing spell

The Realm of Legendlore sits on an unstable nexus of reality and sees many visitors from other worlds. You are such a visitor.

In Legendlore, you have Crossed from Earth into East Azoth and become a changed version of yourself — a songwriter finds themself a bard, a scientist a wizard. You might find yourself in a whole new body to better match your true self, including adopting a new fantasy race.

Legendlore [1] offers a diverse and inclusive world filled with adventure and mystery. Fight megalomaniacal dictators, explore magic and strange science, and claim your Legend as you find a way back home.

In this book you’ll find:

– 18 backgrounds to play as yourself in Legendlore, such as activist or scientist
– Legend mechanics to represent your destiny, plus 5 sample Legends
– Seven player races, including pixies and orcs
– Two new classes, the alchemist and gunslinger, and 15 sub-classes
– A starting adventure with five pregenerated characters

Drawn from The Realm [2] and Legendlore [3] comics, the Legendlore RPG will whisk characters from our world to a magical fantasy realm filled with dragons, orcs, unicorns, and hobgoblins. With over 60 comics published covering three volume runs, The Realm and Legendlore combined became one of Caliber Comics [4]‘ most critically acclaimed series.

The Legendlore Core Rulebook is now available in PDF and Hardcover versions at DriveThruRPG.com [5] and DriveThruComics.com [1].

Note: This is not a stand-alone book. You will need the rules for the world’s most popular role-playing game. Those are available as a book or as an online free SRD and free basic rules PDF.

Legendlore was originally a comic called The Realm [2], first published by Arrow Comics in 1986 and since procured by Caliber Comics [4], about four people who fall through a Crossing into the Realm. The Realm is home to fantasy creatures from elves to dragons, and the characters discover they too have “fantasy powers” – the jock becomes a Fighter, while the bookish one becomes a Wizard, and so on. They go on adventures and some of them eventually find their way back to Earth.