Live, fight, and love on Mars, talking about Cavaliers of Mars with Rose Bailey

The Cavaliers of Mars Kickstarter [1] is hurtling toward its final hours and we had the chance to catch up with developer Rose Bailey for a few quick questions about this new project as part of Onyx Path Publishing’s Many Worlds. One Path. line-up of excellent RPGs.

Cavaliers of Mars [1] is a swashbuckling adventure setting from Rose Bailey, longtime developer of Vampire: The Requiem and other World of Darkness titles. Cavaliers draws inspiration from pulp fantasy and historical fiction, adding a modern edge and an exotic setting.

What can you tell us about the world of Cavaliers of Mars?

Cavaliers presents a Mars of strange vistas and stranger people, and the reckless and joyous last days of people on a world winding slowly towards its own sad end.

What were some of your biggest inspirations for this setting?

Fritz Leiber’s Fafhrd and Gray Mouser stories were a huge inspiration — this is a place for rootless outsiders to set down more roots than they’ll admit to, a place that’s both macabre and subtly whimsical. Similarly, the hardboiled swashbuckling of Arturo Perez-Reverte’s Captain Alatriste novels loomed large as I was creating the game. Finally, Leigh Brackett’s almost gothic planetary romance set the tone for a lot of the places on our Mars.

What kinds of characters can you play in the game?

Cavaliers of Mars covers a wide range of character types, encouraging you to mix and match different careers to develop a checkered backstory for your hero. You can be a soldier, a physician, a courtesan, or even all three at once. The game’s bias is toward building compelling characters with a surprising capacity for getting themselves into trouble.

Did anything interesting or unexpected happen during playtesting?

Plenty! I’ve been running the setting for years, and it’s deliberately broad enough to support wild detours. At a demo at the Midwinter Gaming Convention last year, a player character ended up impersonating a princess, then starting a duel with the princess’ betrothed… which the rest of the characters made a fortune taking bets on. 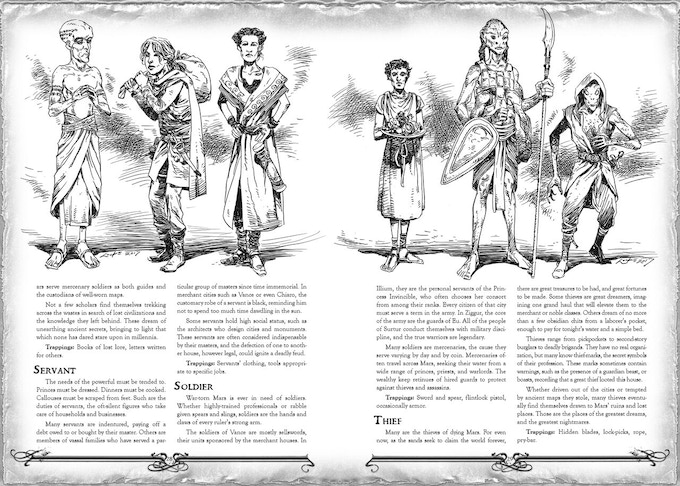 What writers and artists were involved in creating this game?

How did those creative teams come together?

I put together the team primarily from people I enjoy working with who’d expressed an interest in the game, plus a few ringers who I like to pull into as many things as possible. 😉 Audrey, our senior writer, has done a bunch of Darkness work with me, and was instrumental in getting me to move from Cavaliers as something I was tinkering with for myself to an actual game for other people.

This Kickstarter has already funded and is into stretch goals, what can you tell us about the “Witch-Queen of the Shadowed Citadel” and “City of the Towered Tomb” books?

Witch-Queen of the Shadowed Citadel is one of those books that emerged from working on the core. We had several references to the Witch-Queen, a Venusian exile dwelling in the Labyrinth of Night (an actual Martian canyon system that we…adapted). As I developed the book, it became clear that there was both something deeper to explore in that place and an exciting story to tell around her.

City of the Towered Tombs is both a guide to the setting’s signature city, Vance, and a loveletter to urban adventures, my favorite form of gaming. It’s something that’s been on my mind in some form or another since working on Damnation City for Vampire — a big, dirty fantasy city with unique charms and quirky citizens, but put together in a way that makes it easy to build the exact city you need for your own game.

Rose, we just want to say thanks for taking the time and best of luck with these last few hours on the Kickstarter!

Find out more information and back this project on Kickstarter.com [2]!

[3] Rise of the Last Imperials Interview with Hiromi Cota : https://www.flamesrising.com/rise-of-the-last-imperials-interview-with-hiromi-cota/

[4] Discussing Faith Among the Dead with Onyx Path : https://www.flamesrising.com/discussing-faith-among-the-dead-with-onyx-path/

[5] Matthew Dawkins is infected with the Contagion Chronicle : https://www.flamesrising.com/matthew-dawkins-is-infected-with-the-contagion-chronicle/

[6] Onyx Path explores the history of Chronicles of Darkness with Dark Eras 2 : https://www.flamesrising.com/onyx-path-explores-the-history-of-chronicles-of-darkness-with-dark-eras-2/

[7] Kickstarter has gone to the dogs with Pugmire : https://www.flamesrising.com/kickstarter-has-gone-to-the-dogs-with-pugmire/