Magic and Motherhood in The Witcher Season One Part Two 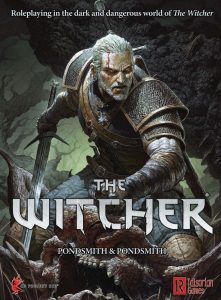 [1]Netflix’s adaptation of The Witcher debuted in December 2019 and has been met with both criticism and accolades. In this second installment of my two-part deep dive into magic, worldbuilding, and motherhood I want to talk about motherhood and reproduction specifically. As I mentioned last time, I had a lot of fun with Geralt of Rivia. When I watch a show, I can’t turn off my creator’s brain, and a few bits stood out to me. You can read Magic and Motherhood in The Witcher Season One Part One [2] if you missed it. Otherwise? On to part two!

Today, I want to talk about two aspects of the worldbuilding that informs my perspective on motherhood. (As a gentle reminder: I’m basing this piece off of the show and not on additional content.) The first aspect circles back to what I mentioned about magic last time: it’s unclear how Chaos works. This matters in the story with respect to the mages who sacrifice their reproductive organs to remain eternally young. There is a chorus of voices addressing the disability in The Witcher [3] so I won’t touch on that here. I do want to point out a few problems I had with Yennefer’s sacrifice from a different perspective. First, you have a male character, Giltine, who’s performing a hysterectomy without any anesthetics on Yennefer to gift her with eternal life. Despite the fact this was Yennefer’s choice, that woman should’ve passed out from shock. Why those parts for eternal life? Do the male characters get castrated? Not everyone has the same organs. Not everyone can have children. Why couldn’t a different body part be removed? What happens if you use a separate organ in the ritual? What does this mean for queer characters? So many questions!

There are a lot of assumptions that occur with this bit of magic in the show. I thought the hysterectomy was to transform her body and wasn’t to make her immortal. I had no idea the other mages also went through this transformation until much later. By far, that scene was my least favorite of the season. I didn’t have enough context to fully grasp what was happening and there were layers of meaning to unpack. Yennefer’s power is removed by someone else; in the original, she removes her own power. That’s a much different statement than giving her body to a dude she barely knows to mutilate. Yennefer having control over her own body is its own message. As others mentioned, I don’t know why her body was changed by this magic, too, in part because I didn’t see this happen to any of the other mages. They looked, sounded, and acted the same which made me more confused than anything. It would have been interesting if Yennefer had eternal life but didn’t change or if a different minor character, like one of Tissaia’s charges, had been coming out of the surgery before she went in.

The second bit of worldbuilding is a minor detail that I struggled with: the passage of time. Yennefer’s timeline took place over centuries, but I didn’t feel that was the case because not a lot changed for her. The cult that formed in Nilfgaard developed at a reasonable pace, but the rest of the environment and its mages never seemed to change. When combined with her hysterectomy, her quest for a child felt off to me. Are the mages not told that they physically are unable to reproduce? It’s a gold dragon shapeshifter who tells Geralt she’ll never recover the ability to have children. Why doesn’t he tell that to Yennefer who should already know that? There’s no magic solution because she needs a transplant–which could be a different and more realistic goal than to only seek magical relics. And what of the other mages and their quest to have children? Does adoption not exist on this planet? Or *gasp* birth control?

Where the reproductive aspects and magic explanations fell short for me, there are plenty of mothers to admire, like Cintra, and a lot of well-developed women’s personalities that go beyond a stereotypical sorceress. There’s also a few to be upset about, too, which is something that’s needed when you have a large variety of mothers. Geralt has a mysterious mother and the reason why she gave him up is never realized. Foltest, the king of Timeria, and his incestuous relationship with his sister, Adda, is another big question mark given how she died in childbirth. The depth and breadth of characters is something we definitely want to see in a fantasy show, especially since not all mothers or women are the same. Not only does their inclusion highlight how the systems of power function in this world, it also underlines their motivations can be very different. To that end, I’m expecting to see more of Fringilla in season two to unpack her character; I think her comments about building a legacy have potential, but oh I do hope that legacy isn’t a commentary on her infertility. More than a few times, we’ve seen characters portraying themselves as monsters in other shows because they cannot have children which is not a viewpoint that bears repeating.

Among the mages, however, there’s only one maternal figure: Tissaia. I felt her arc was the most complex and interesting because she felt real. She’s the mother who isn’t perfect, who has make hard choices, who tries and fails to love her “children” equally. I don’t quite understand why some of her charges had to be turned into eels (or why they were immortal eels?), however, because the idea that Chaos is a limited resource that can only be renewed with the sacrifice of human beings makes no sense to me. As I mentioned last time, I remember being very confused after that episode despite the later clarification. Still am. Regardless, it was clear that Tissaia has a complex relationship with other mages, and her feelings toward Yennefer and the other characters were nuanced and changed over time. Though I didn’t truly feel Tissaia’s connection to Yennefer until the big battle at the end, I recognize that was there. Despite everything that Yennefer had done in the past, Tissaia wanted to protect her and gave no proclamations of love. She simply showed Yennefer that she did.

This concludes my two-part deep dive into The Witcher Season One, which is now available on Netflix. Got comments or your own insights to share? Feel free to post them below!

Monica Valentinelli writes stories, games, essays, and comics in her Midwestern studio. She’s best known for her related works to Vampire: The Masquerade, the Firefly TV show, and Shadowrun among many others. A graduate of the University of Wisconsin-Madison’s Creative Writing program, Monica now writes full-time. When she’s not obsessing about deadlines, she designs jewelry and dabbles in watercolors and acrylics. For more about Monica, visit www.booksofm.com [4].

[2] Magic and Motherhood in The Witcher Season One Part One: http://www.flamesrising.com/magic-and-motherhood-in-netflixs-the-witcher-part-1/

[3] disability in The Witcher: https://io9.gizmodo.com/what-the-witcher-gets-wrong-and-right-about-disabilit-1840609870