Matthew Dawkins is infected with the Contagion Chronicle

The Contagion Chronicle is an overarching compendium of chronicle hooks, riveting settings, and Storyteller aids to help present all the Chronicles of Darkness game lines with one consistent story. In the chronicle, the Contagion acts as a motivational force and inspires the formation of factions where vampires, werewolves, mages, mummies, etc. come together in new and unique ways.

Developed by Matthew Dawkins and currently on Kickstarter.com [1] with just over a week to go. We asked Matthew a bit about the project and his work at Onyx Path Publishing.

How did the initial concept of the Contagion Chronicle come about?

From discussions between myself and Rose Bailey, and myself and Rich Thomas! There was a thread of an idea to make a crossover chronicle for Chronicles of Darkness, but nothing had been established as to the nature of the product or how it would function. I had a good chat with Rose and Rich about my ideas for Contagion being a reality-warping, dimensional interference threat, which could conceivably unite the disparate elements of the Chronicles of Darkness into working together. My main inspiration came from three places: the TV show Fringe, the interstitial terrain chronicle hook in the Horror Recognition Guide for Hunter: The Vigil, and the Anti-Monitor from various DC Comics crises.

What are some of the challenges of including all of the Chronicles of Darkness game lines?

The biggest challenge of including all game lines is getting past the idea that there’s a power imbalance. The best way we found to address this was in focusing on what each character type is good at, rather than what they struggle with. Essentially, characters with skills in one are can fill in for the ones who don’t have skills there, no different than a rogue in D&D disarming the traps because the sorcerer isn’t so good at that kind of thing. Of course, learning the rules for every single Chronicles of Darkness game was a pretty big task as well, but I build time to research in to developing big books like this. All the writers were tasked with learning two separate Chronicles of Darkness games, too.

Contagion Chronicle is using the 2nd Edition rules, how does that work with game lines that haven’t yet been released?

I communicated with developers of unreleased games (such as Monica Valentinelli for Hunter: The Vigil and Eric Zawadski for Deviant: The Renegades) and I was developing Mummy: The Curse. Open communication is always the best way to collaborate on these kinds of projects. Ultimately, this book works because we were happy to work together. We’re all working for the same company, and really, the same game lines, so ego shouldn’t get in the way of the necessity to share ideas.

You are the developer on Mummy: the Curse 2nd Edition as well. Anything interesting you can tease readers for that upcoming game line?

This edition of Mummy is going to really expand the possibilities of the game. Its subtitle is “The Timeless Chronicle” because mummies awaken throughout time in a non-linear fashion, and their primary antagonists in this edition are not only immortals from the book World of Darkness: Immortals, but also the timeless, cosmic Judges who take avatar forms. All the favourites from first edition will return, but this edition will truly make the game exciting. 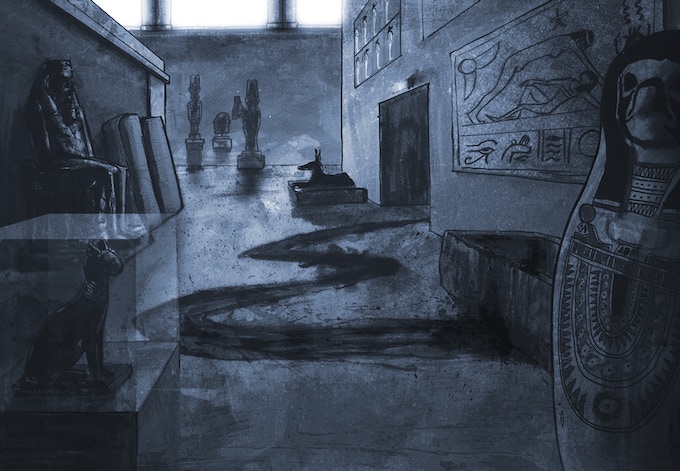 What were some of the biggest challenges during the playtesting and development of the Contagion Chronicle?

I ran many, many playtests of the Contagion Chronicle. The main challenges were through the sheer number of variations of play that can be had with this game. A faction consisting of a Beast, a Promethean, a changeling, and a werewolf is very different to one consisting of a vampire, a hunter, a demon, and a mage, or a mixture of the two groups, not to mention when you throw mummies, deviants, and Sin-Eaters into the mix. There was no way I was going to “nerf” any of the creatures’ powers to make them fit with each other. Instead, what became apparent both through playtest and conversation with Eddy Webb, was all the characters had to benefit each other through working together. The vectors (teamwork-based powers that grow stronger the more diverse the team) were born from finding a fun and simple way of making mixed groups playable.

There is a Contagion Chronicle event at UK Games Expo, what can you tell us about that?

The Kickstarter is fully funded and achieving stretch goals, what can you tell us about those?

The Contagion Chronicle stretch goals are (at this time) a companion book for crossover rules and a book of outbreaks around the world. The former is really going to delve into the “crunch” of crossover, from how mage power ? affects a vampire using power ?, as well as metaphysical questions like “what happens when a Promethean enters the Hedge?”, “can a mummy invest their Pillars into a hunter?”, and so on. The latter book will provide new settings, new versions of the Contagion, and greater profile of the playable factions, their powers, and sub-groups like skinchangers, ghouls, and witnesses.

Thank you and we’re looking forward to the Contagion Chronicle hitting our game table.

The Contagion Chronicle is currently funding on Kickstarter.com [1] and backers can read manuscript previews, ask questions to Matthew and his writing team, interact with other Chronicles of Darkness fans, and more.

[3] Once upon a time, they took you from your home. Changeling: the Lost Second Edition is available now! : https://www.flamesrising.com/ctl2e-available-now/

[4] Onyx Path continues to explore the Dark Eras of Chronicles of Darkness : https://www.flamesrising.com/onyx-path-dark-eras-companion/