The Midgard Campaign Setting for 5th Edition and Pathfinder RPG is a 300+ page volume describing the Midgard regions, from the Northlands to the Western Wastes, and from the Southlands to the Crossroads. With detailed locations, cities, rulers, heraldry, plots, and adventure hooks galore, plus full details of the various pantheons, masked gods, and dark gods, there’s enough here to fuel years of adventuring!

Five years have passed since the original release and now Kobold Press is updating the Midgard Campaign Setting, with even more magic, monsters, and expanded content! Wolfgang Baur is here today with a guest post about this ambitious project. 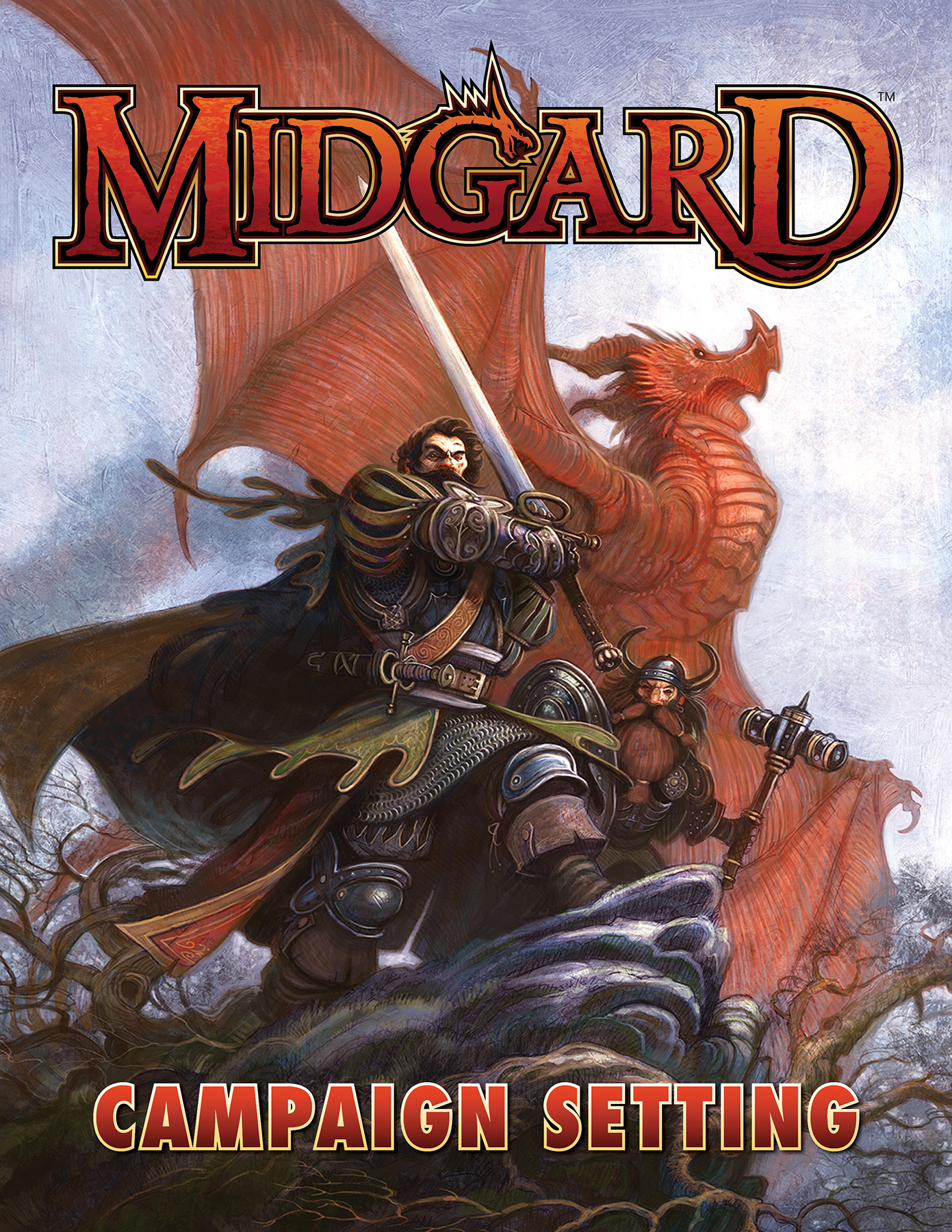 In the Midgard Campaign Setting, we like our fantasy dark, deadly, and doom-ridden. To that end we’ve drawn its brooding pantheon of dark gods and demon cults from the deep wells of myth and legend—adding a twist that makes them unique to the setting. Here’s a few of Midgard’s dangerous and somewhat creepy gods to contemplate as villains and inspirations for your game (if not exactly models of proper behavior).

Baal-Hotep: The dragon god of fire, law, and justice is a great patron of the conquering hordes of the Dragon Empire, and a shining exemplar of perfection for kobolds, dragonborn, and other scaly races. Greedy and proud, subtle yet dangerous, born in fire and the patron of looters, tax collectors, and gold miners, Baal-Hotep demands (and gets!) fiery sacrifices of blood and treasure. A sermon preached from dragonback is much harder to ignore than one from a pulpit; and for those who fail to heed the divine message, a blowtorch to the face has a way of getting people’s attention.

Chernobog: Midgard leans just as heavily on the Slavic and Germanic tropes and legends as it does on the Norse. Chernobog is the dark patron of Midgard’s evil gnomes, a figure of murder and mayhem seeking to bring eternal darkness to the world. Frankly, he wants everything and everyone to die—either screaming in pain and horror, or slowly in a frozen wasteland, just so long as death is rampant and he rules the throne of skulls that Odin so foolishly stole from him long ago. Bitter, strong, and sharp, Chernobog is a mastermind of evil, and his cultists have a reputation as smart and utterly ruthless.

Loki: As the patron of fishermen and brother to Thor, Loki could easily have carved out a quiet life. But of course, he hasn’t! It’s much more fun to play both sides against each other, as long as Loki stands on top no matter who wins. In Midgard, he’s been tampering with the fates and trying to speed up Ragnarok—for Good and Important Reasons such as Saving Asgard (maybe). Slippery as an eel, and friendly to the giants, Loki is also quite lovable and even charming to adventurers when the mood suits him. In some ways, he fits in perfectly as a dark reflection of adventurers, always looking for the next big score. 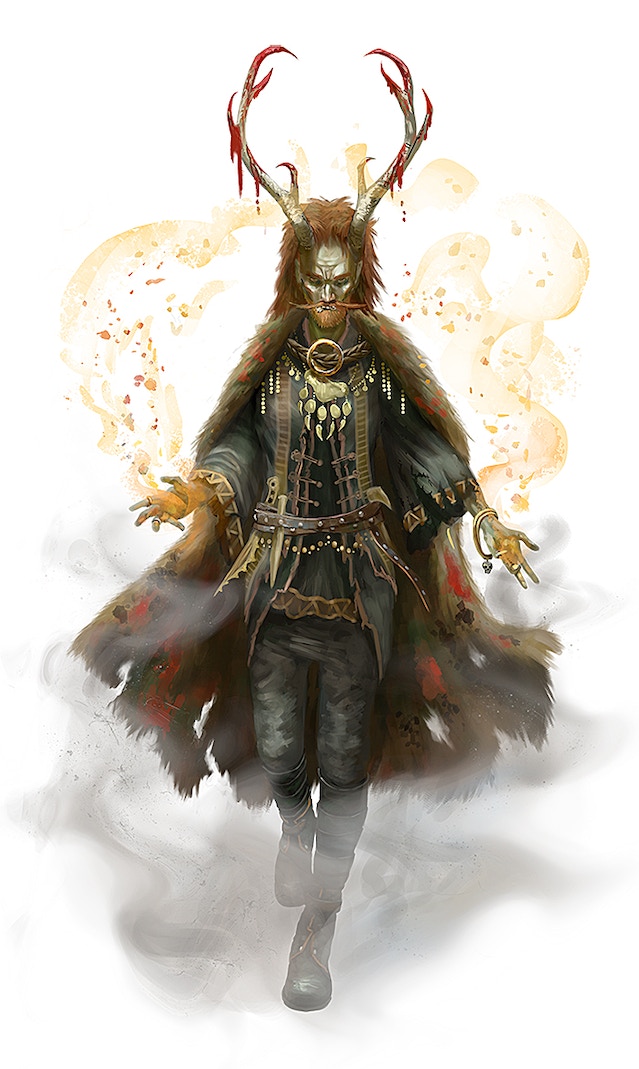 Marena the Red Maiden: Goddess of blood and winter, patron of the Blood Kingdom of Morgau, Marena was once little more than a village goddess devoted to childbearing and fertility and petty vengeance. When the vampire prince Lucan built temples to her blood-aspect throughout his ever-expanding realm, her abbeys and priesthood grew rich within the undead Blood Kingdom, and became a source of horror and loathing everywhere else. While Marena remains a protector to pregnant women and a guardian of the poor, she is also a rapacious goddess that receives yearly blood sacrifices for her altars, and for her human and vampiric priesthood. In her great temples, her traditional crown of braided straw is now made of hammered gold—though the maroon stains on her robes are still dyed in the traditional way, in the blood of her enemies.

That’s just scratching the surface of Midgard’s dark cults, of course: we haven’t touched on Vardesain, Lord of Ghouls, or the Mythos-tinged mysteries of the Black Goat of the Woods, or the horrors found in the temples of Addrikah, dark patron of the derro, or the fey and shadow magic of Sarastra, Queen of Night and Magic. But it’s a start.

An Open World: But Midgard is not all evil, all the time. We’re currently aiming to open the entire setting—good, evil, and various shades of gray—for design and expansion by anyone who wants to tackle it, by publishing on DriveThruRPG in a program similar to DMs Guild for D&D, or the Cypher System Creator program for Cypher System. The Midgard Open World program will launch this spring if the Kickstarter for Midgard: Dark Roads and Deep Magic gets to 2,000 backers. Even a $1 pledge to the project counts toward the goal.

The Kickstarter [1] ends at midday on February 24, and offers special editions, a range of extras, and adventures for backers.

Join us for things dark, darker, and darker still! [1]

[2] Delve into D&D History with Tales from the Yawning Portal : https://www.flamesrising.com/delve-into-dd-history-with-tales-from-the-yawning-portal/