[1]Today, FlamesRising.com is pleased to present you with a preview of Punch the Maker-Killer, a monster from Arc Dream Publishing’s Puppetland [1] by John Scott Tynes. The PDF is on sale now, and the hardcover edition will be available in October.

Puppetland is a storytelling game. You play a valiant puppet who speaks aloud every word you say. You speak for your puppet and the Puppetmaster says the rest. You surprise each other at every turn, collaborating moment by inspired moment to unlock your own creativity and find the puppet within. This lavishly illustrated edition of Puppetland has been significantly revised and expanded. It includes a grim storybook fable of the Maker’s foul murder; the true story of the creator’s life in Puppetland; and new Tales ready to be played, written by a brilliant collection of authors.

In Puppetland, player-characters are puppets living under the oppression of Punch, the most evil puppet of all, murderer of the Maker of All Puppets. Puppetland is a diceless story game where conflicts are resolved not by chance but by the judgment of the Puppetmaster and descriptions of what each puppet Is, Can do, and
Cannot do. Punch is a terrifying antagonist not merely because he Is quite tall and quite strong, but because he Can work magic. Indeed, he worked magic to unleash the cruel servants that hunt for disloyal puppets: Punch’s army of Nutcrackers and the personal enforcers that he calls his Boys. 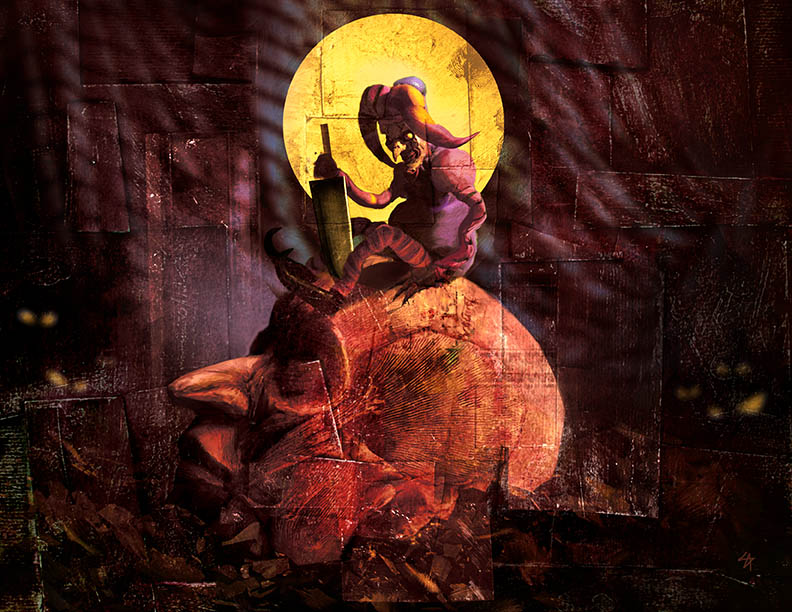 THIS PUPPET IS: quite tall, stocky, heavy, slow, quite strong, cunning, impatient, and cruel.

THIS PUPPET CAN: kick, throw, or grab things; hit things very hard; command the Nutcrackers and Boys; order any puppet to do anything and kill them if they don’t; and work magic.

THIS PUPPET CANNOT: dodge things thrown at him; be happy, survive without his mask of flesh, allow disobedience.

NOTES: Punch is a megalomaniac. A twisted and vicious puppet, he has been corrupted by the ways of humans, and was so before Maker’s Land ever came to be. That he kept this corruption hidden deep within his
bitter heart—so that even the Maker couldn’t see it—is tribute to his high intelligence and cleverness. Punch is a wily, cruel puppet who lives only to exert power over others and gain more power for himself. He is selfish and bestial, freely abusing those near him when it suits him to do so. Punch is vindictive and takes even the smallest slight as a personal affront worthy of being burned alive at the stake—his standard punishment for any disobedient puppet.

Punch wears a red cloak and hobbles about under the weight of the great deformity on his hunched back. At all times, he wears a mask over his face made of the dead flesh of the Maker. He has cut eye and mouth holes in this fleshy mask so he can see and eat, and wears atop the mask a red cap that he dipped in the Maker’s blood. Punch the Maker-Killer carries with him a great mallet. When angry, he usually chooses an innocent puppet nearby and beats him to death with the mallet in an explosion of fury.

Punch’s Boys are six in number, and if anything the puppetfolk are more afraid of them than they are of Punch—for it is the Boys who go out and enforce Punch’s insane edicts. They glide through the streets of Puppettown and the roads of Puppetland each night, their feetless forms moving swiftly through the air like vengeful spirits. The Boys are hollow cloaks of human flesh, cut from the dead skin of the Maker. Their names are Spite, Haunt, Grief, Vengeance, Mayhem, and Silence.