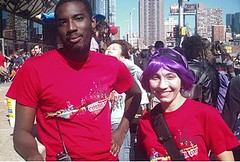 The 2010 New York Comic Con and New York Anime Festival (NYCC/NYAF) took place at the Javits Center over three days. I had a blast at my first NYCC/NYAF! There was a lot to do and a lot of other fans and professionals to meet. I didn’t get to see everything I wanted to, but there was more than enough to keep everyone (myself included) entertained.

One of the biggest treats at a convention like NYCC/NYAF is getting to talk to the people behind the scenes about what’s going on, what’s coming up, and what fans can look forward to. Here’s a few brief highlights and interviews:

Dark Horse is one of the best comic book and graphic novel companies around (www.darkhorse.com [1]). Despite how crowded and busy it was at their booth, Jeremy was cool enough to take some time out of his schedule to talk about some of the things coming up with DH. 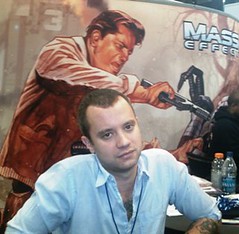 FR: So for fans that couldn’t make it to the convention — and those of us that missed the Dark Horse panel — what are some things people should watch for with DH in the coming months?

JA: We’ve got a few things. Some new Mass Effect comics in January. Joss Whedon is finishing up Buffy Season 8 and starting Season 9. Angel and Spike will also be coming to Dark Horse. It’s going to be a Joss World, with comics of his series under one house. Also Dollhouse. And we’ve got Troublemaker: Volume 2 in November.

FR: What would you say to comic book fans that are new to Dark Horse? What should they look for in DH comics?

JA: We have consistent quality and top talent. I would say we’re edgy, we have experience in the industry. There’s pretty much something for everyone at Dark Horse.

FR: What are some of your favorite DH works?

JA: The B.P.R.D. Series from Mike Mignola. Lagoon [by Paul Di Filippo]. Probably my all time favorite comic is Concrete by Paul Chadwick.

Things have been heating up in a great way for IDW over the past few years. I was fortunate enough to get a chance to talk to the multi-tasking Anna Maria White, IDW’s Director of Marketing and Promotions. She patiently and enthusiastically answered my questions while handing out promo materials for D&D to other convention attendees.

According to Anna Maria, IDW has a slew of new comics coming out. Spike will have his own ongoing series, with a new issue of the comic out on October 20th (look for it in stores now). IDW also worked closely with HBO for the Alan Ball True Blood graphic novel, which will be out in November. Next year they’re unveiling a whole new Godzilla comic. And one of the biggest things on the slate is a Zombie Infestation series, which pairs zombies with Star Trek, Transformers and others. 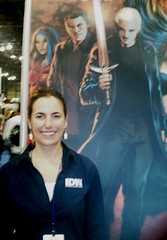 For comic book and graphic novel fans that aren’t familiar with IDW, Anna Maria said, “IDW is mainly a creator-owned brand. We work closely with creators to deliver a product we’re all proud of. We have Joe Hill’s Lovecraft series, which has been picked up for television, and 30 Days of Night. And IDW has stuff for all ages. Peter Beagle’s The Last Unicorn is pretty popular – you see people asking for it now, but we’re all sold out [Laughs].

The Last Unicorn isn’t typical, because it’s a small brand, but it works well with us. We also have  a series coming out called Kill Shakespeare, with different stories about what might happen to his characters if they didn’t die, and they’re all hunting this demon called Shakespeare. Of course there’s also Dr. Who and Dungeons & Dragons and so many others. We have a great bunch of writers and artists that are dedicated.”

As for the shift of Angel moving to Dark Horse, Anna Maria stated that things are going well. “Joss has a great vision and he wanted all of his titles under one roof. We completely understand and support that. Dark Horse is great and we’re working closely with them to help the transition go smoothly.”

One of the most anticipated events was the preview of The Walking Dead [2]. The packed house was treated to a few scenes from the show, which premiered on October 31st on AMC. About the series and AMC, Producer Gail Anne Hurd said, “When you find the right home for something, you just know.”

Writer, Director and Producer Frank Darabont elaborated on the process. “We tried to go for a cinematic feel. The crew, cast, keys, everybody — they did so well that they make it look like it was shot on a bigger budget.”

During the Q&A session, they responded to the question of what it was like to adapt graphic material for television vs. a novel or short story, especially given the fields they had previously worked in.

Here are their basic points:

Frank Darabont: “They” don’t fight you tooth and nail over the material and the characters. It’s more fluid.

Gale Anne Hurd: There’s more time with the characters. You get to spend more hours with them, develop them and develop the story.

Robert Kirkman: I agree. I don’t know. (With a shrug and laugh.)

Based on the current buzz, and enthusiasm of the cast and crew involved, AMC’s The Walking Dead is sure to be a hit. Fans will appreciate the fact that the show will be about more than just the scare. “It was a journey, and it’s fantastic storytelling,” Gale Anne Hurd said. 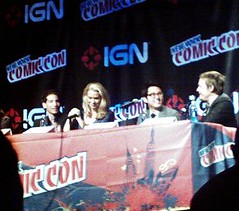 Marriage, love, relationships, loss – it’s all there. Even though this is Robert Kirkman’s first time working in television, it’s not likely to be his last. With so many talents on board, and so many fans ready and waiting for the series to get underway (and continue), zombie fans everywhere are hoping this will become a new trend — fun, engaging, scary television with a brain (to be eaten).