Preview of Never Knew Another by J M McDermott

Fugitive Rachel Nolander is a newcomer to the city of Dogsland, where the rich throw parties and the poor just do whatever they can to scrape by. Supported by her brother Djoss, she hides out in their squalid apartment, living in fear that someday, someone will find out that she is the child of a demon. Corporal Jona Lord Joni is a demon’s child too, but instead of living in fear, he keeps his secret and goes about his life as a cocky, self-assured man of the law. The first book in the Dogsland Trilogy, Never Knew Another is the story of how these two outcasts meet. 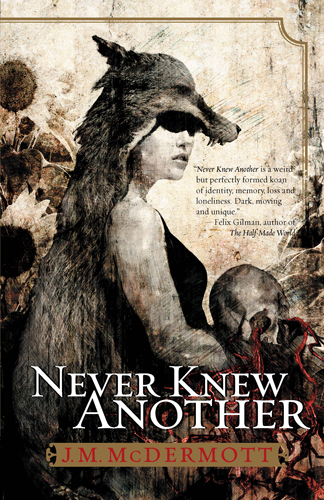 [1]My husband and I placed the head from the body we had found upon a rock face at the top of a hill, where the sun and moon would always fall upon it. He had worn the uniform of a king’s man in life, but he had demon in his bloodline, and he had stained the earth where he had fallen. My husband and I prayed there, with the head on the stone, to the goddess Erin, and raised our eyes to the sky, to her. We fasted and fasted all day. We drank only water when the moon slipped from behind the clouds. We prayed and we prayed.

In morning twilight, Erin granted me the vision. I cried out in pain. Where is my body? screamed the skull. Where is Rachel?

He and Rachel were lovers as true as any in the city. She left him. He died chasing her. I asked my husband if he would die for me. He said no. Jona would have said the same until the moment he realized what he had done. His mind was mine now. I could sift through his memories, if I knew what to seek; I could reach into the lives of the people around him, as they were known to him. His human mother’s hand on his face, his days and sleepless nights,and his great love all floated over the surface of my world. His human mother’s hand on his face,his days and sleepless nights,and his great love all floated on the surface of the world. I looked into my forested hills, and saw where he had walked among them—how he had seen my home and longed for his.

My husband touched my hand. Even when we were human, we spoke to each other as wolves. Anything?

His mother was human. His father is already dead. There is another demon’s child. Maybe two.

To his city, then, to walk behind his life, and search for memories. The seed of Elishta must be burned away to ash, no matter who they are or who they were. Those born to such blood pollute life where they walk.

What was his name?

Jona. There are two others—Rachel Nolander, and… The second’s name is on the tip of my tongue. They might lead to others. Give it time. His name will come. All things will come.

My husband and I had found the corpse near a bluff. We smelled it before we saw it.Something had burned a hole in the sunflower smell. When we found the corpse, it was face down, half-buried in mud and stiff and cold.

Everything living had died where the tainted blood pooled. Tiny red mushrooms—all deadly—sprouted like warts. This noxious corpse wore the uniform of a king’s man. My husband had frowned.I was lucky, the last time. There was only the one. He had no brothers or sisters. These two others may lead to more as we find them.

My beloved had found one long ago, when he was a young man, and I was not yet born. After he killed it, the poison of the man’s blood left him sick for months. It burned off all his hair. I look at him and cannot imagine him without his long, silver hair all down his back. He had told me stories from that demon’s memories, of a life spent in hiding in back alleys and hillsides. The demon only went into cities to steal pigeon cages, and baby pigeons. He had loved to watch his pet birds fly. When he was found, all his Never knew another pigeons had to be killed and burned.No one could allow hawks and cats to catch them and spread the stain from the demon’s sweaty palms stroking their backs.

Demon children were not common anymore. The Nameless of Elishta had been driven deep underground, where they could not make children with human mothers. We found this one a grown man, dead on the ground, like an artifact from ancient times.

We had pulled his head loose from his body, with thick leather between our hands and it. We had to be careful not to get any blood on our skin.We had placed it on a stone in full light of sun and moon, and Erin blessed me with the demon child’s mind.

My husband and I pulled the wolfskins over our backs upon our return to the place where the body had been found. We pressed our noses into the earth along the perimeter of the bluff, searching for signs that would spark my awareness—another body,a lost tool or precious thing,a smell of someone, any sign that called to Jona’s memories. Rachel’s smell was all, to him.

Her trail led north and north. We found nothing else here. He was not of the woods, like us.

Ants have no souls to lose. We gave the tainted skull back to the body while we cleaned away the bones. We planted two red queens in the his gaping mouth, and blessed them both to quicken their hungry daughters. When only bones remained, we planted tough dandelions to eat the worst of the stain from the earth. We’d harvest the first generation of dandelions before they spread their white seeds. Then, we will plant sunflowers.

This first generation of sunflowers will be short and covered in thorns, but those sunflowers’ children will be better. In a few generations, the flowers won’t need to be burned. Someday sunflowers will once again bloom here. They will be as tall as men, and smell sweet.

Deadly magic stopped both armies and the man who cast the spell, Lord Sabachthani, declared it a victory for his city over theirs. The spell had stopped all life where it spilled over the ground.Blasted sand, a faded red color like old blood, poisoned the ground at the boundary of the kingdoms here. My husband and I stopped at the valley’s red boundary line. We served a kingdom of men, here. We could not run past the valley with the wolves. The pack would continue on without us, hunting north. My husband and I were Walkers,not true wolves. We had to stay behind, to sift through Jona’s memories for signs of the stains of this kingdom. We howled our sorrow at our running brethren, and the dust cloud they kicked up with their paws, until we saw them at the far side, pressing on into the hills beyond. We could not mourn their passage. We had our work, for Blessed Erin. My husband and I planted new weeds at the edges of the sand. We cut down the ones that had died before they could flourish. We spread grass seeds in the red mud where runoff from the hills pooled into a puddle in the dead sands.

This old wound would have to wait.We had to hunt the demon children,and the new stains made across the land, uncontained by hills and time.

There was a watch tower from the city near this place. The king’s men there were polite,and little else.They said that some small skirmish had happened before we found the body. People had died. The ones that had been found near the watch tower were sent home to their families to be buried, and no one got sick from their bodies.That’s all they knew.Young men, all of them, and bored. They wanted us to leave so they could play cards, again, pick fights with each other, and roll dice. We were not of their world, nor they of ours. They asked us what we wanted. We asked for supplies. They gave them. As we left, I turned back and saw them slouching and rubbing their necks. Jona’s mind knew none of these boys, and none of them knew Jona.

In the city, this would change. King’s men knew each other.

The ants had been given enough time to finish their work by then. My husband and I returned to the ant-stripped bones to collect the clean skull. I lifted it gently with strips of burlap wrapped around my hands.We placed the skull inside a wicker box.

I stripped the rest of the uniform from the demon bones to give to the city proof of his heritage, if it came to that. The uniform was nearly destroyed, but enough strips of cloth and leather remained where the demon child’s acid blood hadn’t completely destroyed it that it was recognizable. I wrapped my hands in stiff soldier’s leather to do it. I knew I was being stained, but I felt nothing. It could have been any bones. I held
his skull up, turned it in my hands. If I hadn’t known he was a demon’s child,and smelled the stain,I’d have thought it the skull of a normal man. He was hardly deformed at all. He must have been a few generations removed from the father of the stain.

His memories lingered, still, where the soul had sunk into the demon-stain in the bones. I needed to keep his skull close to me to reach his mind’s remains.

We placed the uniform in the box as well.

[1]As we traveled, we wrapped our hands in oiled burlap as if we had been burned. We rinsed with holy oil every day until the taint faded. The city sits on a bay beside a long peninsula that noblemen had cut loose with a canal to make their island against the rest of the city. Who could blame them? The mainland side stinks of shit, smoke, and fish. It is on our land, but we never go there without a reason.

Never Knew Another is available now at Amazon.com [1].

This preview for was provided and published with express permission from J M McDermott.

[2] Preview of The Zombie Feed Volume One Anthology : https://www.flamesrising.com/zombie-feed-one-preview/

[3] An Agreement with Hell Preview : https://www.flamesrising.com/an-agreement-with-hell-preview/