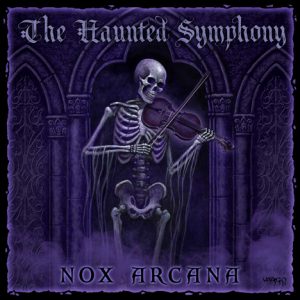 Deep within the haunted halls of Ravenwood Castle, a dark secret has been uncovered—a lost symphony, said to be written by one of the cursed souls that yet lurks within the abandoned keep. Legends say that the music weaves a spell of darkness, opening a gateway to the spirit realm, guiding the restless dead to find their way back into our world. Listen, if you dare, but beware the Ravenwood curse, lest you fall beneath the spell of The Haunted Symphony.

Joseph Vargo states, “The music is hauntingly somber with tracks that range from darkly elegant to sinister and powerful — along the lines of Gothic and Shadow of the Raven, but with some new dark twists. The story tells the tale of Aleister Ravenwood, a tormented musician who embraces the darkness in his own soul. In the solitude of his castle, he heeds ghostly voices and becomes obsessed with creating a sorrowful symphony dedicated to his lost love, Isabelle. The music casts a sinister spell, opening a portal to the past and guiding the restless dead back into the realm of the living. Aleister realizes too late that his masterpiece is a curse to all who hear it. His spirit haunts his castle to ensure that his dark creation remains hidden from the world.”

The Haunted Symphony is available for pre-order and will be shipping on or before August 20th, 2019. Link: https://noxarcana.com/symphony.html [1]

Haven’t listened to the ethereal, otherworldly songs by Nox Arcana? Take advantage of a $5.00 price tag and pick up one of their other musical suites. Each collection has a dark theme ranging from dark fairy tales to Lovecraftian and spooky carnivales–all produced by Nox Arcana. Link:
https://noxarcana.com/music.html [2]

[5] Phantoms of the High Seas by Nox Arcana : https://www.flamesrising.com/pirates-of-the-high-seas-nox-arcana/