One Who Walked Alone Review 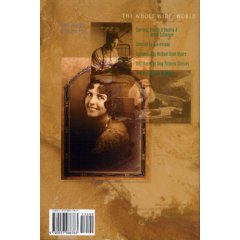 Like a lot of folks ’round these parts, I’m a huge fan of Robert E. Howard. I think he had all the imagination of Tolkien, and for my money, was a better writer. Your mileage may vary, of course, but that’s all moot.

I own all of the Del Rey collections: The Coming of Conan, the Bloody Crown of Conan, the Conquering Sword of Conan, Bran Mak Morn: the Last King, Kull: Exile of Atlantis, The Savage Tales of Solomon Kane, Crimson Shadows,and Grim Lands. I eagerly look forward to the day when they finally release collections of his western stories, and would love to own collections of his letters (though I currently don’t).

I guess you could say that as a writer I hold the man in high esteem.

I always felt it a tragedy that he was taken (or took himself) from the world at the age of 30, when he was just starting to really crest. Anyone who has read his collections, in which the stories are included in publication order, can see his writing improve as he goes along. Who knows what he could’ve accomplished had he managed to write the western novel he always wanted to write?

In any case, I always wondered about Howard’s life. I knew he had an unhealthy attachment to his mother, and I knew that he killed himself after discovering she would never recover from a TB-induced coma. But what about him? What kind of man was he? Was he reclusive like Lovecraft? Was he a drunk like Poe? A bohemian like Byron?

Then, several years back, I stumbled upon a film called The Whole Wide World, starring Vincent D’Onofrio…as Robert E. Howard. I loved the film, but was left hanging due to a few odd choices made by the filmmakers (who do a very poor job of separating Cross Plains from Brownwood). Thus, when I found out it was based on an actual memoir by the one woman who knew him better than anyone in the world (save perhaps his mother), I had to read the book.

Bless my fiancee, who pays attention, and for Christmas last year I received a copy of One Who Walked Alone. Robert E. Howard: the Final Years. My last year of school interfered with my reading a bit, but the book has now at last been devoured.

One Who Walked Alone is, in simple terms, a masterpiece. For decades Novalyne Price kept silent about her relationship with Robert E. Howard in the last two years of his life, kept tucked away the journals she kept of their dates, their tumultuous friendship, and their conversations. In the early 80’s, when L. Sprague de Camp published Dark Valley Destiny a book that painted Howard as a wild psychopath who believed that his characters threatened his life if he didn’t tell their stories, she decided she’d had enough and wanted to set the story straight about who exactly Robert E. Howard was.

Throughout the work, Price does not pull punches, either with Howard or herself. She had the perfect opportunity to edit and excise the text to make herself appear more…I suppose “blameless” is the best word, though that’s not proper, either. What I mean is, Price does not make herself appear perfect. She doesn’t turn herself into what we gamers like to call a “Mary Sue.” Indeed, she presents herself as a not entirely likable person. As a youth, Price was extremely shallow and caught up in all the conformity and appearance upkeep of the 1930’s small town southwest. She is an individual clearly at war with herself, deeply loving, respecting, and admiring the clearly roguish Howard, but unable to embrace those feelings for fear of the social consequences such an embrace would create. At first, I didn’t like the woman very much at all.

But as I read, I came to deeply respect her willingness to show her warts in the interest of telling a complete story.

As for Howard, in this book we get a very clear portrait of a deeply conflicted and complicated man, a man far out of his time, and one wrestling with hard emotional problems that, in the 1930’s, were not nearly as easy to diagnose and treat as they are now. Anyone with any experience or knowledge of psychology can see the clear signs of severe bipolar disorder in Howard, and can see his downward spiral towards the end of his life. It is, in a word, heartbreaking. This man was a genius, a brilliant writer, and a true artist, but was utterly consumed by brooding moods that forced upon him a fatalistic outlook on the world. There are times in the book where, even though we know how this story ends, we still root for Price to say something different, to do something different, in hopes that this time, maybe, it’ll come out for the better. This is a nonfiction book that makes us forget we’re reading a story with a set outcome.

Bob Howard was a man who felt deeply and overwhelmingly. He was, like his seminal character Conan, a man of great melancholy and great mirth. He was not possessed of an Oedipal sexual desire for his mother, but was attached to her as the one person in the world who he felt understood him as a person and a writer. If anything, Howard’s love for his mother was akin to that of a child who would be lost without their parent. Some of the Freudian mold would certainly declare that this unto itself makes it an Oedipal relationship; I disagree, but then I’ve never given Freud much credence. I prefer Jung. In any case, I’ll leave it to Price to describe Howard’s opinion of his supposed “Oedipal” relationship:

“I could dismiss his words and remember Bob’s dislike of Freud. Bob insisted a clean relationship should not be damned with a dirty slur” (311).

What Howard did feel, however, was that he owed his mother everything for bringing him into the world, for supporting his writing unswervingly despite a society that shunned and frowned at men who made their living sitting in front of a typewriter rather than doing “Good, honest work.” And yes, he unfortunately came to feel that caring for his mother was all he had to live for.

Bob Howard was also a deeply spiritual man. He was unsure about organized religion, about what kind of God he worshiped, though he leaned heavily towards his Catholic roots. He took his own life, considered by Christians the worst of all sins, but prayed for forgiveness up until the moment he pulled the trigger.

Bob Howard was a paragon of contradiction and a study in paradox.

Even more intriguing, for writers, are the conversations about writing that Novalyne and Bob have. Their relationship begins with her seeking his help on writing, and he spends a great deal of time during their relationship discussing the subject. He talks about his method, how he works, what he thinks one needs to do to get published and make a career of the craft. But he also says time and again that it’s not his place to declare the One True Way. He gives advice, but just as quickly marks it as potentially worthless, because every writer must find their own way. And in these long speeches about writing, he includes a lot of great information, insight, and advice. I think this book should stand with Stephen King’s On Writing as a seminal work on the craft of fiction.

I can find no real fault in this book. It’s true that at times Price’s writing seems unsure and somewhat amateurish, but one has to remember that at least early on, she was an inexperienced writer. And watching her writing grow as the story progresses is alone worth the cover price, as is watching her grow and change as a human being–one argument she has with Howard that, decades later, she wins. Howard did not believe people could change, but there is no doubt that he changed Novalyne Price in a deep and fundamental way.

One Who Walked Alone is an absolutely brilliant book, and any fan or admirer of Robert E. Howard is cheating him or herself if they do not give this one a read.