You will be free.

You know the stories. The hero leaves his village on a terrifying journey, or the waif finds her way through the cold, dark woods. In the end, they kill the giant or shove the witch in an oven.

But what happens next?

In Changeling: The Lost, you take on the role of an ordinary person who has seen the extraordinary. Lured or abducted by the alien Gentry, you have passed the gates and Hedges between our world and the vast fantastic.

In Arcadia, the Gentry changed you. They forged your flesh and sewed your bones, and they gave you a role to play. You were a lover or a servant or a monster. But it was never your story.

Having run from your Keeper and climbed your way back through the Hedge (and didn’t the thorns bite more than they did going in?), you’re back in the world of pizza and Facebook and nuclear anxiety.

Your eyes are open now. You can see that magic is not the sole province of Faerie. The world is alive with wonders most people never see…and rife with horrors that count on that unwariness. It’s all part of your life now. You take the good with the bad, the magic with the monstrosity, the beauty with the madness.

Changeling: The Lost began in 2007, and amassed some of the most passionate fans the Chronicles of Darkness has ever known. Now, it’s reborn in its second edition, which tells new tales and builds on lessons learned in the past ten years. We’re jumping back into the brambles, and letting the scar tissue from last time protect us. 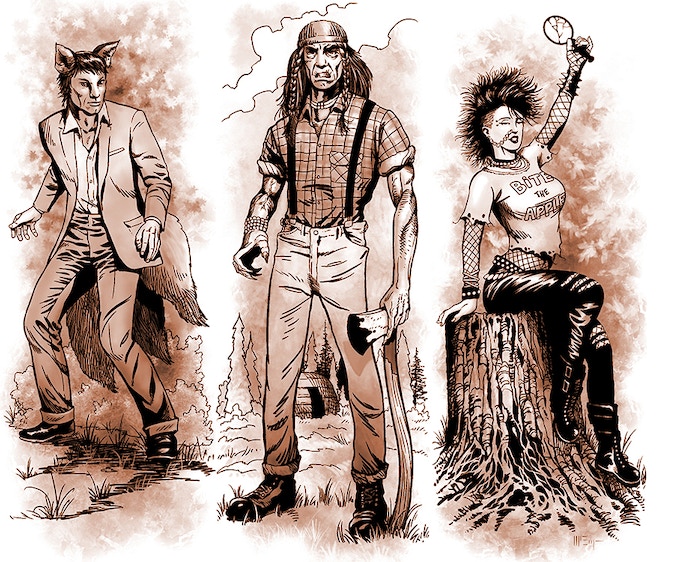 Changeling: The Lost, Second Edition will include the many kinds of changelings and their Courts, powers and other perks for the Lost, antagonists such as Huntsmen, Hedge Ghosts, and of course the True Fae, and cities from around the world with their own local Courts.

– The Fair and the Foul: Seemings (the fairy tale roles changelings play) and Courts (the most common groups in changeling culture).
– More in Heaven and Earth: The worlds changelings move through, and descriptions of changeling culture.
– Words of Wonder: Character creation, Contracts (powers) and Merits for changelings.
– Words of Binding: The core Chronicles of Darkness rules, plus subsystems like Hedge shaping and dream battles.
– Shared Nightmares: Allies and antagonists for the Lost, ranging from goblins to True Fae.
– All the Kingdoms of the Earth: Changeling society in different cities, including local Courts for each one.
– Tales Around the Fire: Storytelling advice, including Chronicle-building, rules for creating new Courts and Contracts, and player safety advice.
– Appendix: The Fae-Touched: Character creation for those bound by promises they made to changelings before the changelings’ abduction.