The They Came From… tabletop roleplaying games take your favorite movies, television shows, and pop culture touchstones and turn them into action-packed and wise-cracking opportunities to tell your own versions of these cinematic stories. 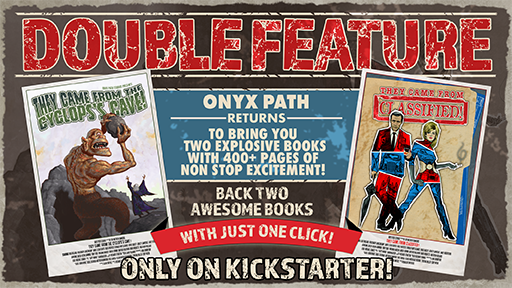 They Came from the Cyclops’s Cave! sees characters ranging from heroic swordsmen and cunning sorceresses to charming minstrels and agile scoundrels, embarking on quests designed to evoke the majesty of fantasy movies and television shows from the 1940s onward. Whether you’re looking to channel an epic like The Thief of Bagdad or grim fantasy such as The Sword and the Sorcerer, Cyclops’s Cave! has everything you need for swashbuckling, noble heroism, and monster slaying.

A DOUBLE DOSE OF DARING AND DANGER!

They Came from [CLASSIFIED]! features heroes ranging from talented adventurers and agency quartermasters, to dashing spies and sexy provocateurs, embracing all the excitement, gadgets, and mayhem of the spy movies and detective TV shows prevalent from the 1960s onward. Whether you’re a Moore-era Bond fan, an aficionado of John Steed and Emma Peel’s adventures, or an Austin Powers-esque swinging cat, [CLASSIFIED]! has everything you need for a groovy, espionage-filled story.

Find out more information and support this project at Kickstarter.com [3]!

They Came from the Cyclops’s Cave! is a tabletop roleplaying game of mythical adventure. Players take on roles as warriors, explorers, tricksters, and all manner of paragons sagas are named after, while the Director introduces mystery, drama, and magical wonders. Together they forge a communal story of distant realms, monstrous menaces, and legendary challenges! This book is an avenue to all the fun you know from movies such as Jason and the Argonauts and Conan the Barbarian, and TV series such as Xena: Warrior Princess.

Expect a certain level of hammy acting, over-the-top drama, and muscular bravado in this game. The movies and TV shows around which TCftCC! is based offered the viewer chances to see plenty of those while heroes were busy fighting against the forces of darkness. Though fantasy gives shape to the epic core of this game, surrounding it is the amazement of fantastical lands, the thrill of deadly quests, the power of mystical artifacts, and, of course, forced dialogue, bad special effects, and silly plots. Fear not: This game contains enough detail to be played with utter seriousness if you so choose.

Now, light the bonfire and sharpen your blade, because the journey’s about to begin.

They Came from [CLASSIFIED]! is a tabletop roleplaying game wherein Players take on the roles of agents, inventors, assassins, and all manner of spies working on the side of freedom, justice, and queen and country (or the President, if you’re from that side of the Atlantic). It’s the Director’s role to introduce mystery, drama, and sizzling romance while your agents push the adventure and plot forward, culminating in a communal story of dynamic combat, malevolent masterminds, and heroic deaths! This book is an avenue to all the fun you know from movies such as From Russia With Love and Austin Powers: International Man of Mystery and TV series, such as The Avengers and The Man from U.N.C.L.E.

While espionage is at the shadowed core of this game, surrounding it is the excitement of flashy casinos, the thrill of dizzying cocktails, the buzz of inventive gadgets, and of course forced dialogue, bad special effects, and silly plots. Don’t fret, agent: This game contains enough detail to be played with utter seriousness, and I’d expect you to take on villainous groups such as SMERSH and PHANTOM with all the grim determination of a spy looking to save the world, but gameplay and the indulgences of this genre are designed as much to engage and amuse, too.

Now, grab yourself a cigar and a scotch from the table, because your briefing’s about to begin.

[4] They Came From Beneath the Sea! Tabletop RPG Kickstarter launches from Onyx Path! : https://www.flamesrising.com/they-came-from-beneath-the-sea-kickstarter/

[5] Live, fight, and love on Mars, talking about Cavaliers of Mars with Rose Bailey : https://www.flamesrising.com/live-fight-and-love-on-mars/

[6] Onyx Path explores the history of Chronicles of Darkness with Dark Eras 2 : https://www.flamesrising.com/onyx-path-explores-the-history-of-chronicles-of-darkness-with-dark-eras-2/