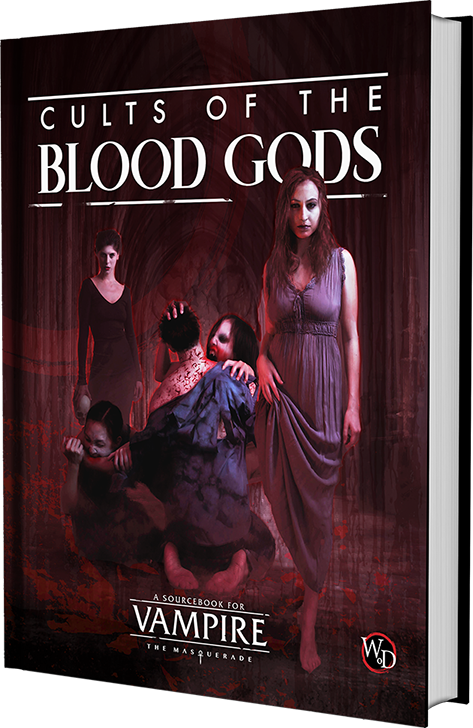 [1]Rich Thomas, founder and Creative Director of Onyx Path Publishing, announced the company launched the Kickstarter for Cults of the Blood Gods, a supplement for the Vampire: The Masquerade 5th Edition core rulebook.

Cults of the Blood Gods [1] is a new style of sourcebook for Vampire: The Masquerade 5th Edition that introduces the pernicious horror of twisted beliefs. Designed for players and Storytellers, this supplement includes:

– An in-character breakdown of the rise of esoteric beliefs among the ranks of the undead and how faith drives many of the major aspects of vampire culture.

– A host of religions — from historic theocracies and globe-spanning conspiracies to fringe cults and mortal beliefs arising in the modern nights — introduced for incorporation into your character backgrounds or as supporting casts and antagonist groups in your chronicles.

– The history, structure, and ambitions of the Hecata, the vampire group known as the Clan of Death, as well as a chapter dedicated to playing a vampire among the Necromancers, and the rituals for their Discipline: Oblivion.

– Guidance on how to use ecclesiastical horror and construct cults in Vampire, making them a vivid backdrop for your own stories, including new coterie styles focused on cult play.

– Faith-based story hooks and a full story centered on the activities of the Hecata, involving walking corpses, ghosts, ready-made characters, and the secrets of the most twisted family in the World of Darkness.

– New Loresheets, Discipline powers, and Predator types for inclusion in your chronicles, encouraging player characters to engage fully with the material presented in this book.

[4] Lore of the Clans for Vampire: the Masquerade available now! : https://www.flamesrising.com/lore-of-the-clans-for-v20/

[5] Rites of the Blood for Vampire: the Masquerade : https://www.flamesrising.com/rites-of-the-blood-for-v20/