Opening the Eyes of Spiragos for Scarred Lands 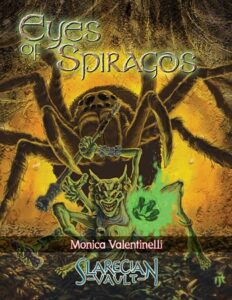 I explain this a little bit in the opening salvo: “During the introductory adventure, Gauntlet of Spiragos, the PCs discovered a giant artifact, the Gauntlet of Spiragos. By its conclusion, the party also recovered the Dagger and Ring of Spiragos in a much smaller, easier-to-wield size. With these unholy relics in their possession, the PCs are slowly discovering the truth: Though the War between gods and titans is over, there is still evil – true evil – that lingers still. And yet, one artifact – the giant-sized Gauntlet of Spiragos – remains, spreading its taint.”

Using the existing narrative threads as my guideline, I seeded characters, clues, and random encounters to connect Gauntlet of Spiragos and my adventure, the Eyes of Spiragos, to the final two adventures while expanding the worldbuilding. This means, for all intents and purposes, Eyes of Spiragos is to be treated as a side quest or complementary adventure to dig deeper into the setting. It’s a tool that DMs can use to help players get more immersed in the taint Spiragos left behind–and is rife with foreshadowing by design. It also means that threads don’t get completely wrapped up, because they’re still unraveling as the adventures continue.

Because this is an additional, optional adventure in the trilogy centered on a new, gruesome artifact, rewards are designed to facilitate the PCs’ gameplay in the city of Fangsfall at the DM’s discretion while gifting the PCs with XP and experience to make future events and NPC encounters more impactful. In this way, I was designing to bolster the narrative with a conspiracy that’s centered on a new titanspawn relic: a gruesome artifact known as the Eyes of Spiragos that leads to an ancient temple and the last enemy of Spiragos.

To accommodate the beginning of Dagger of Spiragos, at the end of my adventure the PCs are back on the road to Fangsfall. As such, the discoveries they made during the Eyes of Spiragos might factor into their decisions during the next two adventures, especially because these revelations foreshadow events and the actions of specific NPCs. That said, while I give some suggestions to weave threads together following this adventure, my advice is not the limit of narrative possibilities or a DM’s creativity and needs. For those seeking more “crunch”, I offer new rules for artifacts, traps, spells and a few setting-related components, including new maps, that make sense for the trilogy while drawing on existing Scarred Lands titles like the Scarred Lands Player’s Guide [5] and the Creature Collection [6].

Curious about the Eyes of Spiragos [1]? This Slarecian Vault adventure is compatible with 5th Edition rules and is available now on DriveThruRPG.com.

[7] Guest Design Post: Pawlik on Empire of the Ghouls and More! : https://www.flamesrising.com/guest-design-post-pawlik-on-empire-of-the-ghoul/