Out Today for U.S. Readers! A New (Shiny) Firefly Encyclopedia 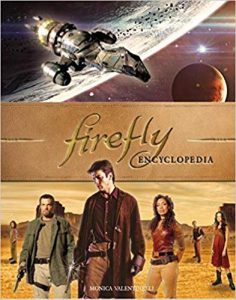 Out now is the Firefly Encyclopedia [1] written by FlamesRising.com contributor Monica Valentinelli. Monica was also the line developer and lead writer for the award-winning Firefly RPG [2] line and wrote The Gorramn Shiniest Language Guide and Phrasebook in the ‘Verse [3] which also featured work by Jenny Lynn, the show’s translator and voice of Serenity.

The Firefly Encyclopedia includes a narrative retelling of the story that draws from the Serenity comics, the show’s scripts, and notes/interviews with Joss Whedon. Additionally, Monica tackles her analysis of the show drawing on multiple sources including a short story by Ernest Haycox (1899-9150). Other contributions include an essay about the science of Firefly by Michael S. Brotherton, new interviews with Chris Roberson and Keith R.A. DeCandido, a eulogy for Ron Glass written by Maurice Broaddus, and additional Mandarin Chinese translations by Tony Lee.

To celebrate the book’s release, Monica is offering a bonus interview with translator Tony Lee [4] on her blog. The Firefly Encyclopedia is available wherever books are sold, including Barnes & Noble, Target, Amazon, and Books-A-Millon.