FlamesRising.com is pleased to present you with a preview of modern horror zombie novel PARIAH, by author and artist Bob Fingerman. Bob wrote an essay for us entitled “Confessions of a Boy Fraidy Cat [1]” where he talked about his personal experiences with the horror genre as a kid.

Today, Bob offers us a look at some of his original artwork and a fiction preview of PARIAH, which was released from Tor Books.

Larry Gabler lay there, gasping, bleeding. At seventy-two, he was Abe’s junior by eleven years, but at the moment he could have given Methuselah a run for his money.

“You gotta get home to Ruthie,” he wheezed as sweat glossed his waxy face.

[2]“Yeah, yeah,” Abe said, pouring himself a stiff one from the bottle in his desk. The radio droned the barely cogent reportage of nervewracked correspondents attempting to articulate what was happening throughout the five boroughs–not to mention the entire globe. Abe took a tentative sip of the whisky, then downed it as he sauntered over to the window to catch an eyeful of uncorked chaos below. As he peered down, three taxis collided, the driver of one bursting through his windshield like a meat torpedo. People were jostling, shoving, climbing all over each other, every man for himself, the hell with the rest. The sounds of screams and random gunfire echoed in the darkening canyon of office buildings, the sun ducked for cover beyond Jersey to the west. Mixed in with the usual filth in the gathered curbside snowdrifts was a new hue: deep red, and plenty of it, like big, bloody snow cones.

“Oh yeah, I can’t wait to get down into all that,” Abe said.

The stray who’d brought Larry limping in cowered, nearly catatonic, on the other end of the waiting room’s lumpy sofa. She was a good-looking young Puerto Rican, maybe in her early to mid twenties. Maybe Dominican. Abe couldn’t tell. Young was young, old was old, Hispanic was Hispanic. Larry let out a chalky groan, farted loudly, and slumped forward, chin on chest, blood oozing from his nostrils.

“I think your friend is dead,” the Latin girl murmured.

“He was dead when he came in,” Abe replied. “I could smell it all over him. You get to my age and death’s one of the few things you can recognize easy.”

Abe looked at the blood- soaked material around Larry’s chewed up calf, the slacks shredded. He downed another shot of whisky and made for the door.

“Where you going?” asked the girl.

Without explaining, Abe left the office of Cutie-Pie Infant Wear and hastened down the hall to Menachem Bender Men’s Big & Tall to pay a visit. Abe tried the door. Locked.

“Bender, you in there?” He pounded a few times, rattling the pebbled glass with Bender’s name and logo painted upon it. “Bender, c’mon! It’s me, Abe Fogelhut! You in there?” No answer. Abe cased the hall, then elbowed the loose pane out of the frame, the glass crashing to the linoleum beneath. Taking care not to cut himself, he opened the door, experiencing the giddy thrill of breaking into his neighbor’s business as well as a jolt of bowel-tightening fear. “Bender!”

Abe gave the unlit room a quick once over, then stepped in, flicking on the overhead fluorescents, which buzzed in protest. A cursory look at Bender’s books made clear Cutie-Pie wasn’t the only outfit in the garment trade to have a lousy last quarter. “Oy,” Abe sighed. “My condolences.” Abe stepped around the desk toward the storeroom, nearly tripping over Bender’s body, a .38 clenched in his white- knuckled hand. Bits of skull and brain matter flecked the adjacent wall and floor. Abe raised a hand to his mouth and then lowered it, realizing he was going to neither scream nor throw up. He just shook his head and opened the stockroom, repeating his previous sympathies. Turning on the light, he allowed himself to smile.

Moments later, he returned to Cutie-Pie to find Larry hunched over the Latina, violently munching on her entrails. The contents of Abe’s stomach disgorged, searing his throat. Larry didn’t even look away from his still- twitching repast as Abe, grateful he’d retrieved the revolver from Bender, emptied the cylinder into his undead partner. The fifth shot removed the top of Larry’s skull and he collapsed onto the girl’s remains. Abe spat bile onto the floor, took a gulp straight from the bottle of Cutty Sark, swished it around, then spat again.

“Okay,” he said, affecting as much calm as possible. “Okay.”

He wiped his mouth with his hankie, took a box cutter and sliced open one of the myriad boxes of his unsold stock of Baby Sof’ Suit®infant winter onesies. “Okay,” he said, “time to redeem yourselves.”

Five-foot-five Abe, with his thirty-inch waist, stepped into an XXXL pair of Bender’s Breathable Sub-zero Shield® Sooper-System™ Weather Bibs, a double-insulated hunting overall for fatties who like traipsing off into the wilderness to shoot helpless critters. Leaving the bib down, Abe began stuffing onesies down the pants, padding himself from the ankles up. When he’d reached maximum density he pulled up the bib, heaved on the matching camouflage parka, and stuffed in more onesies. With the hood cinched tight around his scarf and a pair of snow goggles, Abe resembled Santa Claus geared up for combat.

Flat on his back, Dabney lay awake in the open, the sky above him a slab of starless slate. No clouds differentiated the opaque murk that hung above, but it wasn’t a rich blackness, either. It was grayed out, lifeless. Stars would be nice. Maybe the moon. Something. Instead there was nothing, nada, zip. How could that be? Maybe his eyes were going. Beneath him the silver-painted tar paper was lumpy and hot, still retaining the heat of the day. He felt the texture with his thick fingers, creased and peeling, much like his own skin, which was sunburnt from spending all his time up here on the roof. Let the others rot in their apartments, he figured. I’d rather rot in full sight of God.

Dabney touched his forehead and plucked a strip of his peeling skin away and pressed it onto his tongue, tasting his own acrid saltiness on the paper-thin jerky substitute. He let the rind sit there for a while, building up sufficient saliva to swallow it. He knew this was disgusting behavior, but so what? He was doing a self test of what senses he could stimulate. Taste: check. Touch: check. Sight: negative. Hearing? All was quiet above and below so Dabney forced an acidic burp. Check. Smell?

Smell had taken a beating in recent months, not that smell had ever been his favorite. The nullification of smell was sort of a blessing, given the circumstances. So, three out of five, for the time being. Morning would come and sight would soon return to the roster.

Four out of five.

“Jesus, even a little air movement would be an improvement. Movement. Improvement. A breeze through the trees would please as it rolled over my knees like a disease or honey from bees and it would ease my . . . my . . . Fuck. Lost it.”

With the rhyming game over, Karl rolled over on his side; the mattress where he’d been lying was damp with perspiration. Moisture he could ill afford to lose. Karl stared at the wall, or at least in the direction of the wall. It was so dark he couldn’t see it, but it was there, a thin layer of protection between him and them. And he wasn’t even thinking about the big them. The capital T them. He was just thinking about the them that constituted the others in the building. His neighbors.

All the windows of apartment 5B were open but you’d never know it, the air was so still it felt like a vacuum. Karl inhaled deeply through his nose, some buildup within the nasal passage creating a high-pitched whistling noise. He breathed in, out, in, out, changing the tempo, attempting to negate his insomnia by nose whistling some half forgotten pop tune, the melody of which had come unbidden from the depths of his subconscious. What was that tune? Now he began to hum it, a ditty sans lyrics. But there were lyrics. He knew that much. This was killing him now. The more he hummed, stretching out the notes, the less the words came into focus. This was killing him. Well, not really. But it wasn’t helping.

Weighing, like, a hundred or so pounds was killing him.

Being dehydrated was killing him.

Not sleeping was killing him.

The earworm was merely aggravating.

With internal creaks and pops belying his actual age of twenty-eight, Karl swung his legs over the side of the bed and touched his toes to the bare wooden floorboards, which were as warm as everything else. What kind of world was this where even the floor was tepid? Floors were supposed to be cool to the touch. Even in summer.

Before stepping from the bed, Karl groped at his night table for matches. Though he was loathe to strike one and add to the heat even a little, he was more averse to stubbing his toes or tripping over something. After living in this apartment for the last few years you’d think he’d know the lay of the land, even blind. But he didn’t. His sweaty palm found the book of matches and Karl snapped one into life, the brightness singeing his eyes for a moment as they adjusted to this pinprick of light in the absolute dark. The small dancing light found the blackened wick of one of the candles, which sputtered to life, creating a pool of comforting incandescence.

Karl had lots of candles, gifts from his mother, aunts, grandma, and past girlfriends. Even female coworkers–Secret Santa crap. What was it with women and candles? He’d gotten them as gifts, pretended he’d appreciated them, then thrown them all in a box in his closet. Now he was grateful for them–except the scented ones. He’d learned that lesson the hard way. The fresh, fruity, cinnamony, flowery aromas reawakened his dormant sense of smell, unfamiliar odors rousing the olfactory receptors, which in turn refreshed the revulsion from the overwhelming tang of rot outside. It had only taken one Apples ‘n’ Spice candle to teach him his lesson. He’d lit the wick, basked for a moment in the delicious bouquet, and then puked from a crushing whiff of the ceaseless alfresco parade of putrescence. 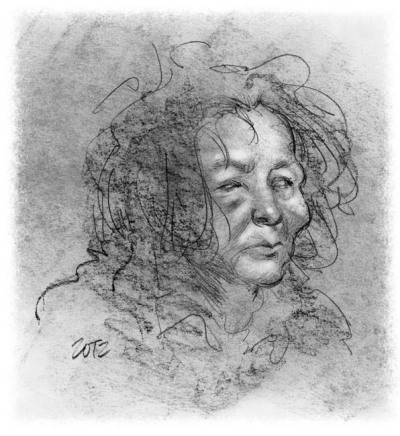 In the light Karl could make out the trappings of his bedroom. The posters on the wall–Kiss, Slipknot, Metallica, Judas Priest, Ozzy, Motörhead, Korn–reassured him, though none of those bands was responsible for the rogue melody assailing his brain at the moment. What was it? Familiar yet unfamiliar. It was sort of pretty in an annoying kind of way.

Karl’s eyes roved to The Wall of Beauty, a veritable tapestry of pinups, centerfolds, magazine clippings, and most personally gratifying (and now, in retrospect, most painfully sentimental), Polaroids from the good old days when he was “getting some” and could occasionally convince his conquests to pose for him in the raw. When things had been different he’d been discreet and kept these pix salted away in a private place, but now? Now they were on permanent display.

Decency seemed an antiquated concept. So when he could work up the energy these days, he spanked to dead ladies. Were there any other kind?

For more about PARIAH, written by Bob Fingerman, be sure to watch for our review at FlamesRising.com.