Path of the Warrior Review 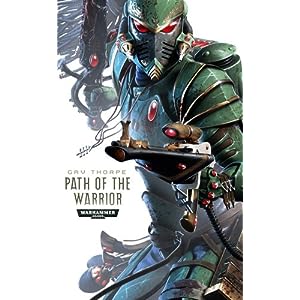 The ancient eldar are a mysterious race, each devoting their life to a chosen path which will guide their actions and decide their fate. Korlandril abandons peace for the Path of the Warrior. He becomes a Striking Scorpion, a deadly fighter skilled in the art of close-quarter combat. But the further Korlandril travels down this path, the closer he gets to losing his identity and becoming an avatar of war.

Path of the Warrior is the first of a new trilogy focusing on the race of Eldar. This is interesting in one respect as the Black Library for ages chose to avoid such novels, wanting to keep the alien races…alien. We’re all human, and the xenos races of the 40k universe should remain so. This presents a challenge for any Black Library writer as they need to delve in to what it is like to be one of these strange characters. Over the past few years there have been other novels presenting various xenos races as protagonist: Fire Warrior (40k), Defenders of Ulthuan (fantasy), Gilead’s Blood (fantasy), Malekith [1] (fantasy), Shadow King (fantasy) etc. Also several novels have had alien races as sympathetic characters if not the protagonist: Guardians of the Forest (fantasy) as well as several others where humans are the main focus, but xenos races get some spotlight time and we get a glimpse in to their psyche.

Path of the Warrior is the first time I’ve seen a full-fledged delve in to a xenos race. A real glimpse of life as an alien. The question becomes can the author make us believe it. Can we delve in to the psyche of a race that is completely alien, make us feel for it, yet keep a sort of awe at the race and characters as being completely foreign to us…maintain that feeling of alienness?

Gav Thorpe steps up to the plate and smashes the ball out of the park!

The story is about a young Eldar named Korlandril who is a bit of a fop, a nancy boy. The story follows him as he deals with some issues that are pretty common to anyone: something we can all appreciate and his eventual trail toward the Path of the Warrior. Once on this path we see some pretty brilliant illustration of how the paths work, what brings the various personality types to the various Aspect Warrior shrines. Mr. Thorpe does an amazing job of illuminating how the Eldar really work: the nuts and bolts of what makes this race tick. They really ARE different. They think, observe, communicate and feel on so many diverse levels, and the author really brings this out in a manner we can understand. The Eldar are incredibly deep.

The novel is not packed to the gills with battles. Honestly, this is much more of a “thinker” novel than anything Gav Thorpe has written. This kind of “thinker” style is something I’ve come to expect from Graham McNeill and others, but Gav Thorpe I think really flexes his writing muscles and expands in to new territory. It’s pretty brilliant.

I will admit that some of the shifts in perspective, and shifts in time between the present and flashbacks of the past are jarring. I don’t think this is necessarily on the author as much as the editor: these could have been broken up better by an extra break or different formatting. There are a lot of flashbacks, which some folks may find jarring, especially since they are often in-line, one para to the next you jump from one POV to another. There were a few instances where we see the same scene from two different views. Again I think if these were broken up via formatting differently it would be easier to follow. As it stood I had to stop and go back a few times, re-read the section to realize what the hell was going on. I will admit that with the Eldar being such a contemplative race it works easier than I think it would otherwise.

The cover art is by Neil Roberts and it is fantastic. Very crisp and stark. A perfect fit. I want a poster of this!

Overall it is a damn fine novel and absolutely essential reading if you are even remotely interested in the Eldar. The author takes us into a few big battles, including one that is Craftworld-scale, including a lot of big names. It’s amazing to see how a Craftworld goes to war. If you play Warhammer 40k and field Eldar, this book should be read before you assemble and paint one figure. If you want to know what the Eldar are really like…you can’t pass this book up. Even if you aren’t so in to Eldar, it’s a smashing good read.

Rating:
Fantastic novel, rich in every way. No other novel to date has captured the overall vibe of the Eldar race in such a perfect way. If it weren’t for some formatting oddities in the shifting of POV and flashbacks, this would have been a perfect 5 of 5. Even with the bit of weirdness, it’s a damn brilliant read. Gav Thorpe is getting better and better! Buy this book — you will not be sorry! I’m such a nerd I’m going to name all my Exarch minis and create shrine names for the Aspect Warriors. I need some more Striking Scorpions!