Atlas Games launched its newest Kickstarter campaign today, for the Planegea prehistoric fantasy campaign setting for 5th Edition. The campaign funded in an unprecedented 30 minutes after its 10:30am CST launch. 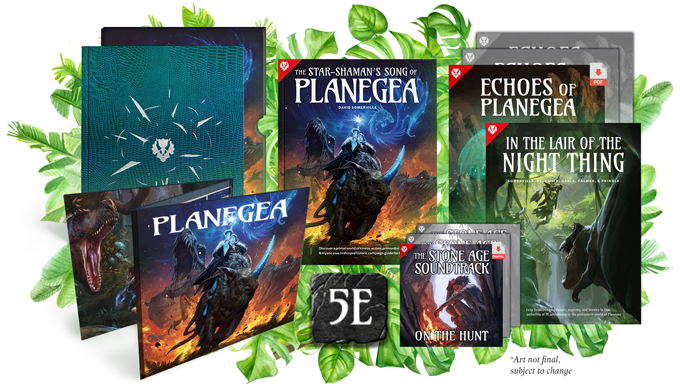 Planegea 5E is the company’s first foray into 5th Edition. “We’ve been waiting for the right IP,” Atlas Games co-owner Michelle Nephew commented. “I knew when I first saw it that Planegea was something special. Who could resist dinos and dragons … together?!” This is Atlas Games’ 11th crowdfunding project. They’ve delivered eight Kickstarter campaigns so far, with two more en route from China and fulfilling by the end of 2021.

Planegea author David Somerville, who also created the hit board game Vast: The Crystal Caverns, says he designed the Planegea setting “out of a love for adventure and the desire to explore new horizons of fantasy at my own gaming table.” He created much of the setting while on a year-long RV trip around the US with his family. Those landscapes and natural wonders inspired the breadth and scale of Planegea.

The Planegea 5E Campaign Setting is on Kickstarter.com [1]!