Fleeing from what should have been a perfect crime, four crooks in a black Mustang race into the Pennsylvania highlands. On the backseat, a briefcase full of cash. On their tail, a tattooed madman who wants them dead.

The driver calls himself Axle. A local boy, he knows the landscape, the coal-hauling roads and steep trails that lead to the perfect hideout: the crater of an abandoned mine. But Axle fears the crater. Terrible things happened there. Things that he has spent years trying to forget.

Enter Kwetis, the nightflyer, a specter from Axle’s ancestral past. Part memory, part nightmare, Kwetis has planned a heist of his own. And soon Axle, his partners in crime, and their pursuer will learn that their arrival at the mine was foretold long ago . . . and that each of them is a piece of a plan devised by the spirits of the Earth. 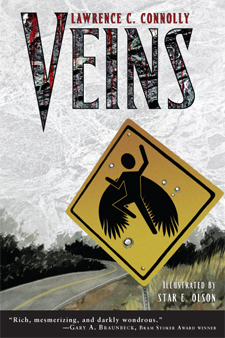 The second time Kwetis visited her, she found him sitting outside the door of her trailer park home, wings folded against his back, clawed feet curled over the rim of a cliff. At first she wasn’t sure which unnerved her more: seeing that Kwetis had returned to western Pennsylvania, or discovering that her front yard now ended at a sandstone precipice.

Kwetis looked back at her, head rotating to peer between his wings. “I’ve come to thank you,” he said. “You did well, Yeyestani.”

Yeyestani was an old word. It meant teacher. Kwetis was flattering her, which meant he had returned to ask another favor.

He stepped away from the ledge, walking on legs that bent backward at the knees, approaching until he stood just outside her door.

She didn’t invite him in.

“Still, he listened when you told him to take the job at the Frieburg estate. He did as you said. That was good.”

“I heard he only lasted a week up there.”

“I heard they fired him.”

“So that’s it? That’s the reason you wanted him up there?”

“Not the whole reason.”

“Yes, but that’s because for you it’s just beginning. Understanding comes later.” He stepped closer. “You are helping our oohaate,” he said.

She had forgotten much of the old tongue, but a few words remained. Oohaate. She remembered her grandmother talking about that. Oohaate. The spirit path. The way that must be followed. It had no equivalent in English, though fate was an approximation.

“So I’m helping you cut a trail into the future?”

“And you’ve come back to thank me? That’s all?”

Kwetis leaned closer. “No.” His face crackled. “There’s more.” He touched her shoulder. His palm was hard, cold. His skin smoldered without heat. “I came to thank you . . . and warn you.”

His eyes shimmered. “Your grandson Matthew is going to die.”

Kwetis rubbed her shoulder. “But through his death, you will gain a son.”

“I never joke. Jokes are for humans. I speak only what is, what will be. When Matthew dies, you will raise his son.”

“But Matthew doesn’t have a son.”

She felt disoriented. He was telling her too much too fast.

“Here,” Kwetis said. “This will help.” He took his hand from her shoulder and stepped aside.

In the distance, beyond the sandstone ledge, the landscape came alive with roaring machines: coal trucks, conveyors, dozers, draglines.

“Tell me what you see,” Kwetis said. “Tell me if you recognize this place.”

“I recognize it,” she said.

It was the Windslow Surface Mine, a wounded valley that had once been pine-covered highlands. Machines had bulldozed the forest, diverted streams, and cut into the mountain until all that remained was a deep gash rimmed by a curved wall of sheared-off rock to the north and east, pine forest to the south and west. In between was a low wasteland of machine-gouged earth. The locals called it the crater.

But though it was familiar to her, it did not belong where she saw it now, a few dozen feet from her doorstep.

“I’ve moved it for you, Yeyestani.”

“So I can show you another piece of the oohaate.”

Her grandson Matthew worked at Windslow Mine, hauling coal along the ledge roads.

“I’ll show you,” Kwetis said. “I’ll show you how he dies. But you mustn’t try changing it. If you do, the oohaate will fail.”

She watched a line of coal trucks ascending the face of the highwall, climbing a road that wound like a screw thread along the curve of vertical rock. Her grandson drove the lead vehicle, and even though she couldn’t see him through the sun-glared windows, she nonetheless recognized his youthful vigor in the moving machine, as if his essence permeated the metal, radiating down into the steady motion of the massive wheels.

“Keep watching,” Kwetis said. “This is how it happens.”

Slowly, almost imperceptibly, the air quivered, trembling with a low-pitched sound, like the sustained ringing of a gong. Seconds passed. The ground stirred, vibrating beneath her. The mine, she thought, the realization coming the way insights sometimes do in dreams. The sound is coming from the mine. The rocks are singing.

To the east, the highwall trembled, its face shivering as the ringing welled into a jagged roar.

The screw-thread road folded, crumbling beneath the trucks. Wheels lost traction as rock sheared away. And then, slowly at first, the convoy fell. . . .

By the time the full force of the thunder reached her, a quarter of the hillside had calved into the crater.

They were inside now, which meant that Kwetis could stay as long as he wanted. It was bad luck to ask a spirit to leave your home once you had invited him inside.

She realized now, studying him as he sat across from her, that he had changed since his first visit. The last time he had been more aloof, less personable. Perhaps this was a different Kwetis, a younger manifestation of the timeless spirit. According to the old stories, such things were possible.

The living room occupied the center of her trailer, positioned beyond a pressboard kitchen and ending at a darkened hallway. The hallway led to her bedroom, and from it came the sounds of her nightstand radio, the one she always played while she slept. She was sleeping now, but that didn’t matter. Her awareness was here, in the living room, with Kwetis.

Kwetis had made himself at home. He sat across from her, wings draping the back of a chair, legs folded beneath him. She had offered him coffee, and he had accepted, the cup sitting beside him now, growing cold.

His gaze turned inward at her mention of the boy. When he spoke, he did so slowly, as if sharing information that was at once vast and personal. “Your grandson will name the boy Alex,” Kwetis said. “But Alex will change the name. He will call himself Axle.”

She pictured the rearranged letters. “He will be a clever child?”

“No.” Kwetis seemed to smile, though in truth his wolfish face lacked the subtleties of human expression. “Not particularly. Not at first. He will require considerable guidance, a lot of teaching.”

“I take it he’ll have an interest in cars.”

“Yes. A big interest. It will be part of the oohaate. Very important.”

“But why will I be the one to raise him? Surely his mother-“

“You will challenge the mother’s right to custody,” Kwetis said. “It will not be easy, but she drinks, and she will drink more after the accident. When you challenge her for the child, she will drink all the time.”

“So maybe we should let her keep the child. Maybe it will help her, keep her from drinking.”

“That doesn’t concern us. The oohaate requires that you gain custody.”

“And after custody. Then what?”

“Then you will teach him the old ways, the language and stories.”

“You’ll remember. They’re in your blood. Trust your instincts. Old memories are like deep rock, there for the digging.” He spoke with his hands, gentle gestures. “Raise the boy well. When he is nearly grown, I will visit you again.” He leaned forward. “That will be our final meeting, Yeyestani.”

She considered that. How old would she be when an as-yet-unborn child reached his teens?

Life is already too long, she thought, not sure she wanted to go another fifteen, twenty years. She was already weary, bone tired, worn to a nub.

Down the hall, something stirred: weight shifting against sagging springs. She felt the mattress beneath her shoulders, but tried ignoring it. She must not wake up now. It would be rude, possibly fatal.

“You have doubts,” Kwetis said. “You’re wondering if you will live long enough to raise the child.”

He paused, his gaze softening. “Yes.” Something moved across his face, a shifting shadow that conveyed a sense of respect and gratitude. He seemed poised to say more, but then he released her hand, unfolded his legs, and headed toward the door.

She followed him down a wooden step and onto a clay path that led past a small chain-link enclosure. The size and shape of a dog kennel, the enclosure held a generator and a large gasoline drum. A sign on the locked gate proclaimed that the contents were property of OSM, Federal Office of Surface Mining:

Trespassers Will Be Prosecuted

A pole rose from the generator, supporting an overhead wire that ran toward a square shack with a boarded window. None of these things-fence, generator, wire, shack-were part of her real world. But she sensed they were important. Otherwise, Kwetis would not have put them in the dream.

He passed them without comment, advancing toward the brink of the now-silent surface mine. The machines were gone.

Windslow Mine, she thought. As it will be in the future: quiet, overgrown, forgotten.

Kwetis stepped toward the crater’s edge and leaned forward, balancing precariously, pointing to the eastern slope where a carpet of trees and grass covered a wedge of collapsed wall: the killing ground as it would appear many years after her grandson’s death.

“Other men will die in the slide,” he said, speaking now with the shifting tension in his wings. He looked ready to fly. “There will be lawsuits, claims of negligence. The company will declare bankruptcy, leaving the workers with nothing while the owners walk away rich.”

She stepped up beside him, letting him know that she wasn’t afraid of the sudden fall. She felt safe in his presence, secure in the assurance that she would live long enough to raise a child who was yet to be born.

“This is the mine as it will be,” Kwetis said. “One day, when your great grandson is nearly grown, you will bring him here.” He touched her hand, speaking with his grip. “You will raise him well.”

She waited for him to say more, but instead he withdrew his hand.

“I’m wondering,” she said. “You seem different from last time. Are you-”

He angled forward and leaped away. A concussive snap rose from his shoulders, the sound of wings catching the wind.

The blast hit her, pushing her back.

She covered her face. Too late. Something had blown into her left eye, burning, becoming worse as she rubbed. She turned away from the ledge, still rubbing, the pain spreading through her, filling her head, traveling with her as she awoke in agony.

By mid-morning, the eye had hardened to a milky white.

Her view of the world had changed forever.

Click here to order VEINS from Amazon.com [1], and be on the lookout for the sequel, VIPERS, coming soon.

This preview for VEINS was provided and published with express permission from Fantasist Enterprises and Lawrence C. Connolly. ©Copyright 2008. All rights reserved.