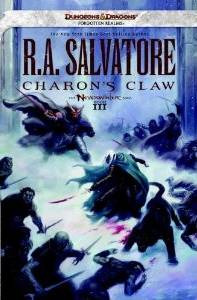 [1]To celebrate the upcoming release of R.A. Salvatore’s Charon’s Claw [1] on August 7th, Wizards of the Coast [2] is thrilled to announce that Salvatore, a 24-time New York Times-bestselling author, will head out on a multi-city book tour this summer to meet fans and autograph copies of his newest novel.

Additional details about Charon’s Claw and the D&D® suite of products can be found at DungeonsandDragons.com [3].

The third book in the Neverwinter Saga, Charon’s Claw follows Drizzt Do’Urden as he draws his swords once more to aid his friends. In this final book in the saga, Drizzt assists the beautiful elf Dahlia as she enacts revenge and helps an old foe break the bonds that have held him hostage for more than a hundred years.

About R.A. Salvatore – R.A. Salvatore is best known as the creator of the dark elf Drizzt, one of the fantasy genre’s most beloved characters. With over 17 million books sold and numerous game credits, Salvatore has become one of the most important figures in modern epic fantasy. His first published novel was The Crystal Shard in 1988, and since that time Salvatore has published more than 50 novels, with 24 New York Times bestsellers to his name, including The Halfling’s Gem, Sojourn, The Legacy and Neverwinter, Book II. For more information about R.A. Salvatore, please visit www.rasalvatore.com [4] or find him on Facebook [5].

[2] Wizards of the Coast: http://www.wizards.com