“A Mega-Dose of Pure Terror”

Synopsis: A mad scientist is experimenting with viral Rage in the middle of the woods. One of the victims of this crazy doctor’s experiment goes mad, escapes and kills the Doctor himself before escaping into the woods, where he meets his death from the Virus. After eating the corpse of the infected victim, the Rage Virus spread to the wild vultures. This causes a lot of horrific problems for visitors and campers to the woods. The birds attack several hikers in the area, spreading and mutating the virus into the plant-life as well. The Vultures infect victims by spraying this yellow slime into their faces. After a group of concert goers get tangled up in this mess when their RV is pretty much decimated by a Raging Zombie and air bombed by Raging Vultures. The surviving members of the party then run into the woods, where they are picked off one by one. A number of raging birds, plants, leeches and other infected people attack them, until the remainders are finally taken by the doctor. There we get to meet a killer dwarf who is wearing the face and clothing of a little girl who was killed earlier in the movie. The final scene is filled with wit and outrageous, over-the-top gore and banter that make this movie what it is. This wonderful splatter house movie has everything that makes the movie rather enjoyable.

Pros: If you enjoy Splatter House horror, this film definitely pulls from that. While not being on the same cult-classic level as Evil Dead (also written by Robert Kurtzman), it definitely should have a decent following for those that like this genre featuring lots of blood, sex, drugs and rock and roll, even a special appearance by the band Mushroomhead, an alternative metal band that performs with black masks and unique theatrical live shows. The CGI is not bad for the cost of the movie. They are a bit choppy, but give the birds a creepy feel. Though the use of CGI for poop when one of the zombie men gets a pole rammed into his ass was a bit over the top. Several of the scene’s are laid out very similar to Haunted House rooms/scenes. I am putting this in the Pro’s because I know a lot of people enjoy having that thrill behind their stories. One of the ending fight scenes has a bad guy coming from several different hiding places at the Heroin.

Cons: It is a low budget Splatter House film. If you’re looking for Resident Evil type of effects, you won’t find it. The plot can be slow moving at point, but they make up for it with lots of blood and gore. The acting is up and down in the movie. Repetitive phrases get a bit boring. (How many times can we say “We have to keep moving) There are even a couple of veteran B-movie stars in the film, who struggle saying their lines. A lot of the male cast as trouble finding emotion behind their lines, and they tend to come out flat or forced. The cat fights seem almost forced in the acting. Almost like best friends are trying to act angry at each other and failing at it. There is also a forest sex scene that was added, that didn’t add much to the development to the story.

Special Effects: Splatter House blood and guts, CGI vultures that are passable, surgery/torture scenes that did make me look away. There were also a couple of scenes involving vomit and feces which gave me a queasy stomach at best, and made me gag at worse.

Overall: If you are into the low budget, Splatter House movie genre, this is definitely a good one to add to your collection. This movie is not for everyone though. If you do not enjoy low budget movies, I would suggest you stay away, as you will not be as entertained by the effects. This is also a good background movie to have on. 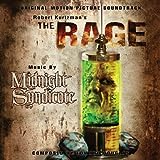 Musically this soundtrack does a lot for developing and using certain themes within its structure. The Rage Theme is used in several of the tracks, and developed very nicely over the length of the album. The percussion rhythms are used very nicely in adding tension and a faster pace to the Tracks.

One thing that really stood out to me was how each theme was used. The Rage Theme would only be used in parts of the soundtrack dealing the Rage. It was developed and expanded upon as a theme when The Rage virus appears in a new way. Moving from people, to birds, to plants and leeches, the virus mutates several times, therefore the theme for Rage was heard and was evolved into new ideas without losing the feel of it. Each character even has their own types of themes. They use variations on the Rage with an added theme on top. It is very simple and scaled down overall, so as not to lose the listening audience because of extreme dissonance.

The use of special effects was very simple yet very effective. A rustle of wind in one track, or the screech of birds in another, a slow moaning-like sounds are all very effectively used to add a wonderful feel.

Overall feel of the album is that is blends together very nicely, works to effectively add to the suspense and horror presented in the film. While not a relaxing soundtrack, it does work well for listening with no lyrics. The tracks also, are not that long. On average about 2.5-3 minutes per track, so the lack of lyrics in the music to help it move is not necessary.

One thing I wanted to see in this soundtrack as a track written with or inspired by the band Mushroom Head. They were featured in the film and nowhere in the soundtrack are they even eluded too. Even a hidden track would have been awesome.

If you like B-horror movies, this soundtrack is great. It gives you a good representation of the movie. If you are a fan of Midnight Syndicate, this album is similar to all their other albums. It tells a story through the use of music and development of themes, which is what they are good at.