Read an Excerpt from Stolze’s Mask of the Other

Today, FlamesRising.com is pleased to present you with a preview from Mask of the Other [1], a Lovecraft-inspired novel written by Greg Stolze. If you like this excerpt, you can also read a chapter preview [2] on Greg’s website, or you can support the author by picking up a copy at DriveThruFiction.com [3].

Excerpt from Mask of the Other 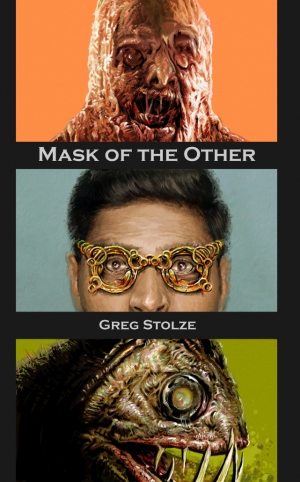 [1]
There was no door at the end, just a squalid room rank with the scent of feces and fish. There was no light except a few dim strings of sunlight through cracks in one wall. There was a bed with a filthy mattress and heavily stained sheets, and in the middle of the floor, crawling towards Hamid, was Jacob Navarro.

He was pale and obviously malnourished. His hair, once brown, had dirtied and aged to cement gray. He had red-rimmed eyes, a sparse beard, and puffy pale gums with most of the teeth gone. He’d wrapped a decaying bed sheet around himself like a toga, but it couldn’t hide the wens and pustules that bubbled intermittently from his skin. Most of the growths and swellings had pulled the skin on them taught and glossy, with a rosy-white color underneath. Some were smaller, denser, and the color of a pencil lead.

The hands he reached out to drag himself forward were scratched and scabbed and chapped, but Hamid’s eyes were drawn in horror to Jacob’s legs. They ended at the knees in ragged gray clumps of rotted skin and scar tissue.

“You’re going to be okay,” Hamid whispered through suddenly-dry lips.

“GET ME OUT OF HERE!” Jacob shrieked.

Hamid sprang into action. First he threw his rifle onto the bed and tore off his windbreaker. “Here,” he said, throwing it to the man on the floor. “Get that on. Rick,” he said into this throat-mic, “I’m gonna have to carry this guy out, he… he can’t.”

“SHIT!” The shriek came from the hall, followed immediately by the hollow report of John’s shotgun. The prisoner started to scream as Hamid grabbed one wasted arm and slung it onto his own shoulder. “Piggy-back,” he grunted. “Don’t grab my throat.”

Gritting his teeth, Hamid swept up his rifle and started down the hall. The gap into the wet darkness was empty again. John’s gun-light projected a quivering triangle in the cordite smoke, showing spatters of thick, reddish-black liquid.

“Run,” Hamid said, jogging past him as Jacob struggled to wrap his truncated legs around Ham’s hips.

They got as far as their last glow-stick before something came out of the passage behind them. Ham was facing forward, with John stumbling backwards behind, and the shotgun barked twice, then again as Hamid spun, raising his own weapon.

Their pursuer was, in the dimness, only a hulking shape, intermittently lit by green glimmers on its wet skin. It roared, with a sound somewhere between a bullfrog and a bull elephant. John fired again and, in the eyeblink illumination, Ham saw a pale giant, corpulent but sleek, vast black eyes like inkwells over a bigger mouth, an inverted V full of endless rows of teeth. He could see speckles and tears on its fleshy surface, something inky pouring from small wounds, and he aimed center mass.

It dropped with a thud.

“C’MON!” Ham shouted, staggering out the door, the sharp odor of John’s breaching rounds still hanging in the air. He rushed a corner and looked back. “Cover!” he called. John bolted out, stopped to wheel his head back and forth, then sprinted to Hamid’s side.

With a curse, John pointed and ran to an unsupported wall, now reduced to little more than a free-standing arch.

Ham broke into a run and caught up with his partner, who was aiming resolutely at the door from which they’d emerged.

“Most of ‘em won’t come out in the daylight,” Jacob said.

“We’re tied off on the south end,” Hamid said, scrabbling for a compass.

“I’ve been on this island forever,” Jacob said, “Sometimes they let me walk.”

“They did that after I tried to escape,” Jacob replied, voice grating. “They bit them off. Now are we going or do you think I’m sending you into ambush? ‘Cause listen, Stockholm Syndrome doesn’t cover what those things did to me.”

Mask of the Other [1], written by Greg Stolze, is available on DriveThruFiction.com [3].