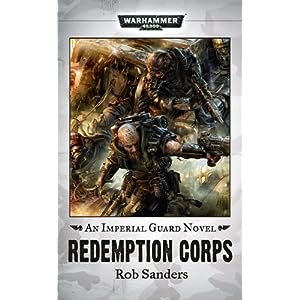 The Redemption Corps is a regiment of ultra tough storm-troopers. Led by the legendary Captain Mortensen, the Redemption Corps and its Navy support divisions drift across the Kaligari Cradle from one warzone to another on brutal missions. When the revered major comes to the attention of the deadly sorority of the Battle Sisters, he not only has to contend with an ork invasion, but these fearsome warrioress-fanatics too. Now, the regiment must fight for its survival whilst being trapped between the xenos and the dark fury of the Imperium.

I read through this one rather quickly. It sucked me in and I couldn’t put it down.  It also helped that I was trapped in the passenger seat on a family road trip as my wife drove us out to the middle of nowhere. Anyway, Storm Troopers are the focus of this book and bear some explanation. The Storm Troops of Warhammer 40k are nothing like those white armored buffoons from the original Star Wars Trilogy [2]. These guys are the most feared and elite soldiers the Imperial Guard can muster. They are trained and indoctrinated to accomplish the most difficult of missions, often requiring deep infiltration with minimal support. Failure isn’t an option and they get the job done regardless of the awful things going on around them.

As you can imagine from that description, the novel featured absolutely hellacious situations and obstacles for Major Mortensen and his troops to fight their way through. To muddy the waters even further, Sanders made sure to inject the story with the medieval mindset of the 40k setting by spicing up the plot with issues like heresy and the zealously paranoid sisters of battle. He did an outstanding job of demonstrating just how intense and dangerous the Imperium can be. There is carnage, bloodshed, heroism, tragedy, and conspiracies within conspiracies.

The Good:
Sanders knows how to write action. This book is filled with mayhem and is done in such a way to further the plot as opposed to just being gratuitous. The Redemption Corps are brutal and their tactics and approach to combat was well depicted. They were featured in a variety of environments (including an interesting deathworld) and the different sorts of missions they engaged in prevented any of the action from getting stale. If you want to know what it would be like to experience war in the 41st millennium, this is a good place to start.

Mortensen and Krieg work well together. Both characters are nuanced and charismatic. They each could stand on their own, but their interactions made the story pop. The conflict between the two helped to make them both more personable to the reader. Mortensen especially benefited from having such a strong antagonist as he is pretty monolithic. I found it impressive that Sanders was able to feature such strong characters without having one being so dominant that the other became marginalized.

The Sisters of Battle were well done. The author captured the essence of their over-the-top approach to matters of faith and service. The sisters definitely helped to set the appropriate mood for a 40k story and the intensely paranoid manner in which they persecuted Mortensen was satisfying and appropriate to the setting. Despite not seeing a whole lot from them on the battlefield, I think I prefer Sanders’ treatment of the sisters as opposed to how other authors have featured them.

The Bad:
I may just be a bit dense, but there were times while reading this book that I felt like I didn’t quite get what was going on. There is a vagueness within the prose of this novel that creeps up on you now and again. It’s as though certain scenes were glossed over or written in a manner that assumed the reader knew what the author was going for rather than describing them clearly.

I’m not giving any details away, but I believe there was a bit too much going on with some of the plot subterfuge featured in the story. I liked what the agenda of the sisters turned out to be, but it did not need to be so circuitous. I also don’t think the ork situation was handled as smoothly as it could have been. I’m sure some of this came down to editing and the need to meet word count requirements, but the whole thing was a bit convoluted and outside even the normal suspension of belief required for 40k.

Final Word:
If you are looking for mayhem this is the book for you. Sanders is a master of carnage and creates gripping characters with charisma. He understands the essence of Warhammer 40k and splatters the mood of the setting all over the place. There will be some passages you may have to re-read as there are some instances of vagueness that pop up here and there. The plot is also a bit convoluted. However, don’t let these flaws cause you to pass this one up; if you are a fan of 40k you will not be disappointed!

[5] Path of the Warrior Review : https://www.flamesrising.com/path-of-the-warrior-review/