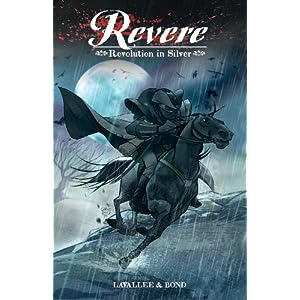 Mash-ups are all the rage; whether it be Pride and Prejudice and Zombies [2], Abraham Lincoln, Vampire Hunter [3], or any number of lesser-known works, putting two seemingly unlikely things together has become a literary obsession recently. Revere: Revolution in Silver carries on this growing tradition, positing that, in his spare time, Paul Revere was actually a werewolf hunter and member of an occult organization dedicated to defending the world against supernatural threats.

With the early days of the American Revolution as the backdrop, Revere: Revolution in Silver takes this premise and runs with it. Doing an interesting bit of world-building, writer Lavallee and artist Bond create a whole new mythology around the famous American revolutionary.

The art style is reminiscent of the Hellboy [4] comics from Dark Horse: spare and cartoonish, and occasionally appearing a bit rough. I find the style perfectly serviceable for the medium, and have no quarrel with it. I like the subtle, effective shading done to achieve different lighting effects – from overcast to torchlit night and full daylight – it caught even caught my artistically untrained eye.

Without giving too much away, it seems apparent that Revere and the chief villain know each other and have history together. Their animosity towards each other is clear, though an explanation is not forthcoming – at least in this first volume. The dialogue is clear and fairly concise, with use of period speech used sparsely for effect rather than overwhelmingly so. A few cliches pop up from time to time, but nothing to really draw one’s attention.

The storyline is solid and eventful, the characters have depth and sensible motivations, and the world-building at work is intriguing; there are more than just werewolves prowling around Colonial New England, and wandering around at night – whether alone or in a group – is clearly a chancy and potentially dangerous proposition. While I wouldn’t view this as a major complaint in any way, I would like to have seen a slightly less heavy hand in portraying the villains – the British are totally insufferable bastards in the story, and while we know that this was true from time to time, there were also less than pleasant people on the other side as well.

At $19.95 for a print copy, or about $10 for a download, the pricing is fairly standard and pretty reasonable. I bought a download copy [5] on spec – just because it sounded interesting – and I wasn’t disappointed. I look forward to future issues and continuation of the current plot arc; I’m eager to see where Lavallee and Bond take this story.

Rating: Four out of Five stars