Rich Thomas on the Werewolf the Apocalypse 20th Anniversary Edition

Hi Flames Rising readers- my name is Rich Thomas (richt on the forums) and since 1986, when I began illustrating and art directing for White Wolf Magazine [1], I’ve been responsible for the look and feel of every White Wolf product ever created — ranging from RPG books, fiction, board/card games and everything in between. I became Creative Director in 2006, which meant I was overseeing White Wolf’s writing and development as well. During this time WW launched multiple Ennie-award winning product lines which I’m very proud of: Scion [2] and Changeling: The Lost [3].

For a few years I worked with an amazing group of computer game creators as Lead Designer and Content Director for the WoDMMO, but then someone was needed to head-up the team on Vampire: The Masquerade 20th Anniversary Edition [4], and I had so much fun and had so many great experiences with our tabletop and LARPing fans that I returned to the world of traditional RPGs with a renewed focus on tabletop gaming. In January 2012 I left CCP and founded Onyx Path Publishing [5] and we are the official licensed publishers of the nWoD, cWoD, and Exalted game lines.

As a lot, if not all of you know, Werewolf the Apocalypse roared into hobby games in 1992, inspiring a generation of fans to stand up and howl their defiance at a corrupted world in a battle they knew they were doomed to lose. Naturally, after the success of V20, both financially but even more importantly in terms of the fervent response from our fan community, it was Werewolf: The Apocalypse – 20th Anniversary Edition [6]’s turn: and when we announced it at last year’s Grand Masquerade in New Orleans the resulting howls would have made any Caern proud- and sent the Wyrm running. The next step was to find a developer who could both handle a giant undertaking like this and who had the background with WtA to be able to judge which elements from which editions could be combined to make a truly definitive 20th Anniversary Edition.

The amazing thing is, Werewolf has only had two developers through the years- all the way through to Werewolf the Forsaken– and both of them, Bill Bridges and Ethan Skemp, were excited to work on W20 and even more excited to work together on it. The Dynamic Duo then went on to hire a top team of Apocalypse writers, some who worked on WtA back in the day like BlackHat Matt McFarland, Brian Campbell, and the man I first met with my Werewolf Tribe Glyphs drawn all over his pants: Phil Brucato. Other writers brought on were fans of WtA who had gone on to become talented RPG writers in their own rights and wanted to return to their inspiration; folks like Holden Shearer, Eddy Webb, Jess Hartley, and Stew Wilson- who so impressed us that he is going to develop the next W20 books. This combination of viewpoints, the experience of the veteran and the enthusiasm of a true fan, meant that the W20 writers brought amazing insights to what needed to be kept and what needed to be polished from all three of WtA’s editions.

Although I worked with the writing team, mostly reminding them to leave in classic elements even if they were “broken” because those things help define the experiences we all had back then, my time was taken over reaching out to classic WtA artists and getting ideas together for what visual elements would be used in this 20th Anniversary Edition. First artist had to be Ron Spencer on the full-page pieces. Ron and I had started as RPG illustrators around the same time and our art often appeared in books together, like the Talislanta series and Vampire the Masquerade 1st Edition, where his amazingly visceral and dynamic pieces always made mine look awful. But he’s such a great guy to work with that I had to forgive him- and hire him as much as possible. With Ron salivating to get to work on the fulls, I couldn’t let Steve Prescott, who did such an amazing job on the beautifully designed full-page pieces for WtA Revised, off the hook and so I asked him to create the figures that represent each Tribe on the 2-page Tribe spreads- always a key visual in WW books.

Another key visual is the use of comic book pages to start off the book and we had some discussion as to whether we’d be able to make it happen. Bill “volunteered” his brother John Bridges, also a classic WtA artist from 1st Edition on, to handle the art while Bill handled the writing and I thought a team up by the Bridges Brothers (they’re twins and have psychic powers, you know) was a cool addition to W20. Other classic Apocalypse artists I was able to first find again and then bring onto the project were Steve Ellis, Jeff Holt, Jeff Rebner, Brion Wackwitz, Richard Kane Ferguson, Drew Tucker, Dan Brereton, and the enigmatic John Cobb, who I found after searching for months because Facebook suggested I friend him. I kid you not. 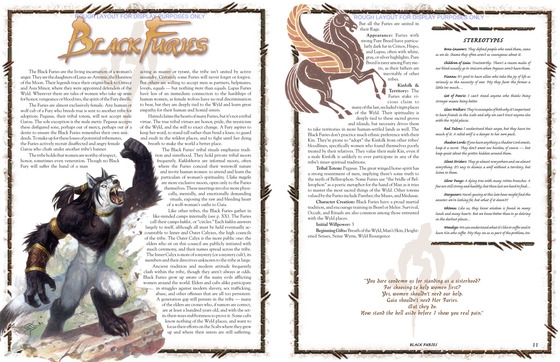 With writing and art being worked on, I had only the need to start on the overall graphic design and visuals, which I planned to do myself much as I did on V20. I started just like I did then, with reaching out to Craig Grant, designer extraordinaire, to create the logo and texture for this 20th Anniversary Edition, but then soon realized that the burgeoning demands of starting and running my own company made my doing the actual layout design unlikely- at best I’d cause the project to be delayed. Fortunately, I could turn to Aileen Miles, who had been the Art Director and Designers on WtA for years, and whose response when I asked her to take over the layout was: “What took you so long? I’ve been waiting.” We were full-steam ahead. Ethan and I posted our progress on the White Wolf Blogs [7] and encouraged feedback on text and sketches from our community, and had a great time with our Open Dev Process there.

So that brings us to the Deluxe Werewolf the Apocalypse 20th Anniversary Edition Kickstarter [6] (and if you think that’s a lot to read, think of how long it is to type like I do, with one finger). Our Kickstarters, and Deluxe W20 is the third, are not a preorder store-front like with V20, but a chance for the whole community to contribute so that we can afford to create deluxe editions of products that we’ll be releasing in PDF and PoD form on DriveThruRPG/RPGNow [8]. As the KS description reads: Deluxe W20 has been planned as a black leatherette (with a different pattern than the Deluxe V20) hardcover with an inset disk on the spine featuring the W20 round symbol, with 520+ full color, silver-edged, interior pages, and a red silk ribbon bookmark. Most importantly, unlike the Deluxe V20 cover embossing, the Deluxe W20 features claw marks die-cut right through the front cover in the tradition of the first two WtA editions.

Also, I wanted to revisit an idea I’d tried to do back in the day: an Ultra Deluxe W20 Heavy Metal Edition [9] with an inset slab of metal for the cover printed to match the original WtA cover and then punched through with the classic claw marks! But it was difficult enough to punch the claw marks through the cardboard hardcover cover. We made this edition one of the pledge tiers but warned everyone that 200 backers is the minimum needed to create it as the manufacturer won’t go to press at fewer than 200.

So it’s up to the Werewolf community to determine if the Heavy Metal Edition will be created- which is scary, but we are marching steadily towards that goal- about 140 pledges have been made as I write this.

I also had a lot more fun with Stretch Goals (funding amounts that are added after the project achieves its funding goal- which the Deluxe W20 KS did in 11.5 hours!) after watching how other KSs really used them to create not just a product but a series of rewards, project upgrades, and new ancillary projects that enhance the whole experience. So far we have added these after the stretch goals were hit: A Making of the Art of W20 PDF that details via sketches and the text of emails and phone conversations the chaotic process of creating the art for W20.

Bill Bridges (developer emeritus and author of the beloved WtA novel The Silver Crown) will write a new novel that will be delivered in PDF and ebook formats to all our backers months before it is put on sale through normal channels. As will Mike Lee, noted White Wolf writer for decades, developer of the classic Demon the Fallen, and famous Black Library author who will write a new W20 Werewolf the Apocalypse novel to be delivered in PDF and epub formats.

More fiction will be provided by a new Werewolf the Apocalypse Fiction Anthology PDF featuring stories by Ethan Skemp, Bill Bridges, and a slew of classic WtA authors as well as a brilliant new group of authors inspired by WtA such as Stew Wilson. In addition, passing $200,000 is such a milestone that it also unlocked a new reward tier or two enabling pledges allowing for a limited number of backers to have their character’s names appear in the stories. 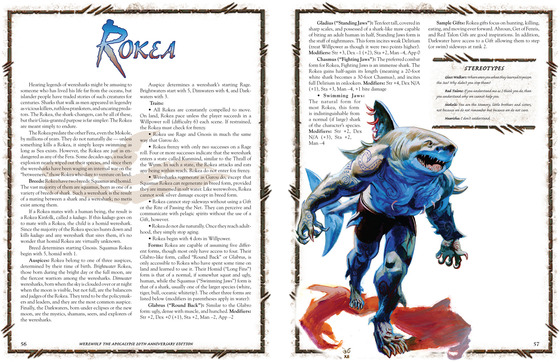 A free copy of the Skinner PDF will be sent to everyone who pledged at the Lore Lover or above. This is a brand new adventure written by Ethan Skemp himself which was scheduled to be released after W20, but Backers get it as soon as it’s finished. It’s a return to that most vile of Werewolf antagonists, Sam Haight, and returns him and his legacy to the position of terror among the Garou that Sam slaughtered so many to achieve. A reward tier and add-on were unlocked that features a W20 Storyteller’s Screen– 3 panels of heavy stock with the amazing Steve Prescott Tribes Assembled art on one side and all the charts needed to run the game on the other. One or two more bookmarks in addition to the existing one were added (depending on whether having three bookmarks would mess with the binding quality). For a book headed toward 600 pages, an extra bookmark or two really helps with referencing different sections. And every backer who pledged at Lore Lover or above will gain a W20 Onyx Path Dice Rolling App compatible with Apple products. This is very simple App that anyone can use at their gaming table to roll their W20 dice pools and is in the testing stage right now.

We just passed the Stretch Goal for $250,000 of contributions, and every backer who has pledged for a physical copy of the Deluxe W20 or the Heavy Metal Edition will receive a copy of the Werewolf the Wild West Expansion Pack PDF developed by Ethan Skemp. Werewolf’s historical take on the time of cowboys, lawless desperadoes, railroads relentlessly pushing their way across the frontier, and bloody clashes between those who have and those who want, is revisited in a 40ish page product designed to be used with W20. And more stretch goals are to come. Phew!

The Deluxe W20 Kickstarter [6] finishes up on Nov 1 first thing in the morning, and then we have to make sure everyone gets the rewards they pledged for. Currently, the book is in layout, we still need a couple of the full-page pieces, and we need to run editing and index checks, create a PDF, get that approved, finalize printing and shipping “details”- oh the project has just begun really. All in all, though, W20 is an amazing project that is confirming what we always knew about WtA and its fans- there are some crazy Werewolves out there!