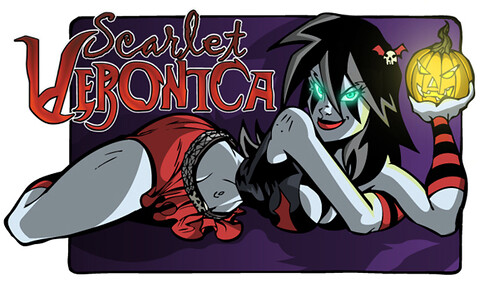 From the creative folk over at

, watch for the new comic Scarlet Veronica coming to a comic book store near you.

Originally set to release just in time for Halloween, the horror comic’s debut was delayed until November 5, 2008. Scarlet Veronica, Issue #2 is schedule to release later this month on November 26th.

Published by Ape Entertainment [1], Scarlet Veronica has, at its helm, an undead heroine.

When Veronica Gains-Burrows died, all hell broke loose. Literally. Now her undead alter ego is all that stands between the forces of evil and the end of the world. Can she harness her new powers in time to stop this army of darkness? –SOURCE: Scarlet Veronica [2]

To order a copy of this new horror comic, visit the official website of Scarlet Veronica [4] or their publisher, Ape Entertainment [1]. On Ape Entertainment’s website, they also have a feature where you can find a comic book store near you.