FlamesRising.com is pleased to present you with an exclusive preview for a new supplement for SCION, published by White Wolf Publishing. Entitled Yazata: The Persian Gods, this supplement takes an in-depth look at the gods of ancient Persia. What’s in store for fans of SCION? New Boons, Knacks, Birthrights and Purviews, including a new general Purview called “Stars” which we have an exclusive sneak peek of right here at Flames Rising.

Yazata Developer Eddy Webb tells us “This is what’s great about fan-proposed products. Siavash sent in a proposal, and instantly we saw the potential of it. It took a while to find the right place for it in our schedule, but I think the work that he and Dean put into it is worth the wait.” 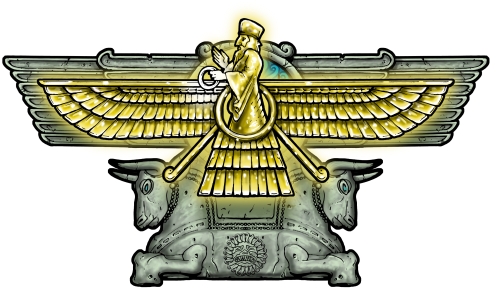 The purview of the celestial order and constancy in time, the empty space of the heavens, the lights of the night sky and the luck and hope they can represent.

Stars and Other Gods

The stars play an active role in many ancient cultures and their myths. As such, the Storyteller may find it handy to include the Stars purview as natural to several of the deities from pantheons that have already been described. Set, as god of darkness, claims some affinity with the stars because they can only be seen in the dark of night that he provides. Tyr, Norse god of the sky, is associated with the pole star. Atlas rotated the night sky, providing movement to the stars, and taught his grandson about the stars (and his father, Hermes is the patron of astronomy and astrology amongst the Dodekatheon).

Just as the heavens can be used to determine the time of day, season or year, a Scion with this boon can innately feel the temporal movement of the universe. When the Scion receives this Boon, she will always know what time it is, down to the precise second. This functions regardless of whether or not she has seen a clock or even the skies recently — once she has achieved this sense of time, it never fades. For anything requiring fine timing, the Scion can, at the Storyteller’s discretion, receive bonus dice equal to the character’s dots in Stars.

If the Scion touches an object, she can instantly discover its age: If she touches a dead body, she can tell how long it has been dead; if she touches a broken piece of glass, she can tell how long ago it broke off. The power is specific to the object being touched; when the shard of glass was part of window, it was a different object with a different age. The Scion must be careful with her choices — touching the hood of a car might reveal the age of the hood instead of the car itself, which could be significantly different if the hood is a replacement from the original — the player should remember to make a distinction regarding what the object is. If the Scion’s player doesn’t make the distinction, the Storyteller should feel free to give any age that can apply.

The Scion is able to bring forth a bit of the sparkling majesty of the cosmos. By focusing herself for one action (Speed 4), the Scion causes shimmering lights not unlike the Aurora Borealis or Australis to gather around her body. The unearthly lights blur the outline of the Scion and make it harder to see just where she is standing, and as she moves, the effect only amplifies. The Scion’s Dodge DV is increased by the number of successes she rolls on activation for a number of actions equal to her Legend.

The Gods of Ancient Persia

The Yazata – the Gods of Persia – have made their presence known. With them come new challenges, and new weapons in the war against the Titans. Whether you are a Hero, a Demigod or a God, these divinities can add a new layer to your cycle.

A pantheon book for Scion.

• A new pantheon of Gods inspired by the myths of Persia
• New Boons, Knacks, Birthrights and Purviews, including a new general Purview (Stars)
• A complete Hero-level adventure

Yazata: The Persian Gods is coming soon from White Wolf Publishing, look for it at the Flames Rising RPGNow Shop [1].

[3] An Inside Look at White Wolf’s Scenes of the Embrace : https://www.flamesrising.com/scenes-of-the-embrace-preview/