Shroud of the Ancients RPG Kickstarter 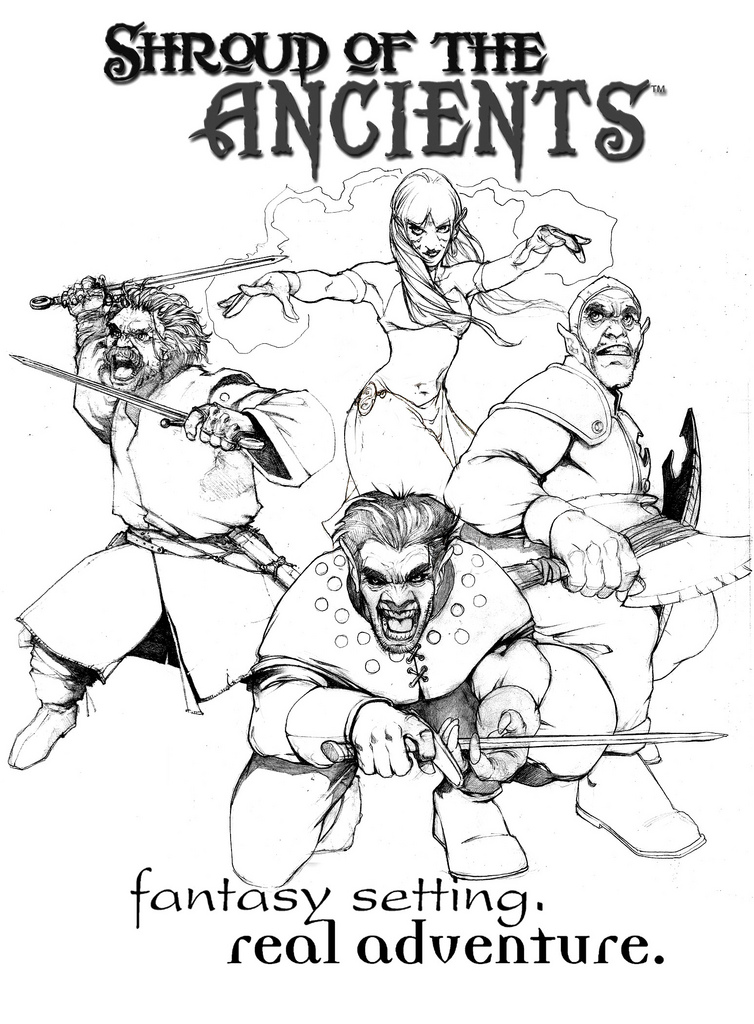 ABOUT THE WORLD OF TERRATH

Ages ago, Terrath’s second moon shattered and fire fell from the heavens. Ancient Empires whose kingdoms had stretched across the known world were no more. A select few of the races and creatures chosen by the gods had been shepherded into sanctuaries and protected by the druidic Order of the Sacred Stone. When the Time of Twilight lifted, those who survived set out to rebuild Terrath, but they soon discovered that its face was forever altered and the tides of Manna had drastically changed, making magic more accessible to those who desired its power. With help and guidance from the Order, they brought the world back from near extinction. New kingdoms and continents forged alliances with old enemies and the survival of mortal kind seemed assured. But soon, the people began to forget that dark time in their past when all hope was nearly lost. And once more, the druids returned to their silent sanctuaries, where they casted their wary eyes towards the heavens and prayed.

Now, with more than a millennium of relative peace, the largest known continent of Terrath, Kathlom, is the stage for a host of escalating conflicts. While, the Alliance of Free City-States and the Empire of Crowns are continually building their armies to resist the threat of one another, the southern mountain ranges of both lands face the ever-present threat of the savage Lowmen, who test the borders daily for a strategic advantage. Sensing the possibility of war, the Barbarian Tribes of the Northlands press for control of the disputed territory that separates them. As treaties are broken and diplomacy fails, war on the northern face of the continent seems imminent.

Meanwhile, at the southern tip of Kathlom, the Seven Princes of the desert kingdom, known as E’binet, face the brunt of the conflict with the Lowmen. With the vast and deadly vortex of the J’Han Rah as their only ally, they are forever watchful for the prophesied Warlord who will march his armies through the forbidden lands to the north and lay siege to their enemies. To the south, pirates from the countries of Avecian and Esvalia continue to travel the waterways and trading lanes plundering what they can from E’binet and the proud nation of Syrania and have done so for many years with impunity… until now. With the discovery of the explosive black powder they call pyrius, the new theocracy of Syrania, with the church of Semperis at its head, promises that these raiders will surrender to the Sacred Land and endure their punishment for their numerous crimes against its people or face immediate execution.

As an adventurer, the skills and distinctions you possess seem to draw you closer to the deadly conflict that engulfs the nation’s borders. But beware, the political and religious internal struggles, deep in the heart of the Free City-States, can be just as perilous. And as always, the Adventurer’s Guild is eager, for a fee, to find a local patron who may need you to lead an expedition into Terrath’s lost cities and forgotten temples on the outskirts of civilization. But as it quoted in the Book of the Exalted Word, “Death awaits those who are unworthy to face the challenge”.

No matter where fate takes you, limitless opportunities lie ahead. Perhaps, with aid from the gods, you may choose to stand against the brutal nature of Low Men or the sinister plans of forbidden cults such as Aden’s Brood and The Disciples of Merrath. Perhaps, you will seek to unlock the hidden mysteries of the Drachanis Stone or attempt to amass fortunes beyond that of the Seven Princes of E’binet. Whichever path you choose, your destiny awaits!

Find out more about Shroud of the Ancients Fantasy Adventure RPG at Kickstarter.com [2].