Sisterhood of the Blade a new fiction anthology from Battlefield Press 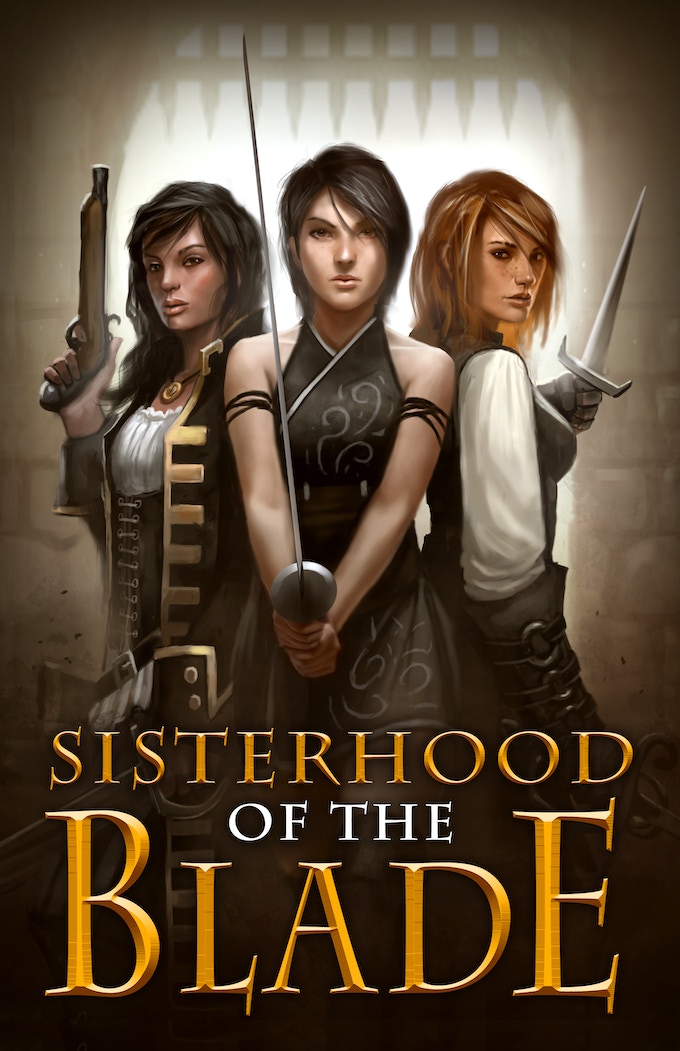 [1]Hal Greenberg and Jonathan M. Thompson are very pleased to announce a new project that highlights a romantic time in history with strong female leads.

In an age when it is not proper for a woman to be a soldier, three bright, savvy, and well-trained female warriors must hide who they are when they accept the burden of protecting and helping their queen (Anne). But once you meet these three musketeers, you’ll realize proper was never a concern.

Aimi met and fell in love with Jacques Marlette when the oils trader visited her birthplace of Japan. After they married, she learned of her husband’s friendship with France’s current ruler, King Louis XIII, which in turn brought her close to the queen. Extremely loyal to the crown, Aimi still has the queen’s ear even after Jacque left France on an important errand for the king, never to return.

When Aimi was told of her husband’s death, she decided to not be the grieving widow, but she did vow that she would make some. Taking up her katana, she dove head first into rumors that the cardinal was plotting against the king and queen, for in those rumors lay the only clues to her love’s murder. Clothed in black or brown, and with a rifle never out of reach, she will protect her queen and all of France.

To aid in her quest, Lady Marlette hired two new “hand maidens” after Jacque’s death. They are the African pirate, Adina and the master tactician and French red-head, Padgett.

At the age of five, Adina was found by a roving band of pirates, who despite their brutish ways took the child in and raised her as one of their own. She spent years on the world’s oceans, and was recently dropped off in France after her adoptive father died at sea. She speaks fluent French, Italian, and Spanish, and her upbringing lends itself well to dealing with rabble. When it’s time to fight, Adina carries a cutlass and keeps a pistol at her side. She also wears a bandolier of throwing knives in her leather armor.

Padgett, meanwhile, is the definition of daddy’s little girl. Her father, a general in the French army, has made sure that his only child is well versed in swordplay and comfortable handling pistols, rifles, and other military weaponry. Growing up so close to the general, Padgett has also mastered the art of discussing tactics with anyone of any rank from any army. If negotiations fail, she’s always willing to take up her rapier and parrying dagger to prove her point. If the need arises, she likewise carries a pistol and her horse often comes equipped with a rifle holstered on its saddle. To honor her father’s wishes, Padgett tends to wear the tight clothing of a soldier and a cape that drapes across her from the shoulders down.

Living on the Marlette estate, Aimi, Adina, and Padgett train hard to serve their queen. They have a small armory, and money is never a concern. Together their tales are more than just a female version of the Three Musketeers, but a reimagining as if the queen had her own special guard.

Hal Greenberg, creator of The Awakened series, Bluffside, City on the Edge and other projects approached Jonathan Thompson at BPI and discussed an alternate idea for a well-loved genre, Hal wanted to lead an anthology that focused on alternate history where the queen of France also had an elite team to handle issues that may be sensitive that the queen did not want to involve other parties. Jonathan loved the idea and started putting out a call out and is very excited about the authors who are attached to this project.

This is the Sisterhood of the Blade.

This Kickstarter [1] is almost half way funded with about two weeks left and has a strong team leading this project. Hal Greenberg (The Awakened I, II and over 20 RPG products) and Jonathan Thompson (BPI owner and manager of over 18 other successful Kickstarters).

The authors range from some newer authors to NYT Best Sellers, they are:

This great project will only happen if it funds, please like, share and pledge to this interesting take on the Three Musketeers.

Find out more information and support this project at Kickstarter.com [1].