The Battle For Slaughter Gulch Board Game Review 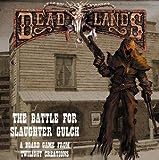 Deadlands, a mix of classic Western, science fiction and alternate history, has gone through a few changes and several editions in its 14-year history. A miniatures battle game and a pen-and-paper RPG of the Deadlands setting – the Wild West with magic and the supernatural in an alternate history timeline – have both been popular and successful, and last year a new addition has been added to the fold: a board game of the Deadlands world, produced by Twilight Creations.

Deadlands: The Battle for Slaughter Gulch pits two to six players against each other in a struggle for control of a small town. Each player leads one of the factions in town: The Agency (think precursor to the Secret Service), The Texas Rangers, The Blessed (Missionaries bringing the Good Word to the uncharted West), Hucksters (spell-slinging dudes from back East), Shamans, and Mad Scientists. Each also has a set of Objectives – from small to large – that provide benefits and bonus victory pints if achieved. Each player starts the game with three “Dudes” from their faction, and each dude may perform an action each turn. Players receive a set of tokens for their faction to mark what each dude is doing. Only one dude can perform a specific action, so two Shaman dudes couldn’t both try to cast a spell on the same turn. This limiting factor forces players to prioritize their actions as part of their strategy.

The board comprises a small, Old West-type town with the Mine at one end and the Rail Station at the other. Running in between the two is a single street lined with ten assorted locales: the Church; Doctor & Undertaker; Hotel & Saloon; Graveyard; General Store; Jail; Telegraph Office; Bank; Theater; and Stable. The faction markers and townsfolk are nicely sculpted plastic miniatures, and are clearly distinguishable from each other for ease of play. Players each have a small, folding cardboard screen to hide the disposition of their faction’s resources, and a miniature map of the town on which the faction’s action tokens are placed to indicate who is doing what on each turn.

There are several ways to win the game. Players roll a six-sided die to determine the specific end goal, but if any three of the six goals have been met before that, that ends the game as well. Goals are such things as the last card of the Event deck being drawn; the mine being depleted of its supply of Ghost Rock; all outfits having five dudes on the board, and so on. At that point, players add up their victory points – and this is where specific faction Objective cards come into play. Each faction has six Objectives that will reward them with bonus victory points if their conditions have been met at any point during the game. The mix is three Small Objectives (generally worth one VP each), two Medium Objectives (Worth two or more points each) and one Large Objective (worth between three and five points). Players also get points for the Ghost Rock they’ve amassed. Ghost Rock has peculiar properties in the Deadlands setting; in this case, it counts only as raw currency without any other special benefits. A worthwhile strategy involves leaving one dude at the mine to continually harvest as much Ghost Rock as possible; there is a finite supply, for one thing; for another, it’s worth victory points at the end and for a third, Ghost Rock is the stuff you use to buy equipment – like better (and more) guns. Such a strategy is not without danger; mine accidents are frequent events in the deck, and result in a roll to see which of the characters at the mine dies from the accident. On the other hand, there are very few events in Slaughter Gulch that aren’t dangerous, so take that into consideration.

There is one problem with this game; development could have used a bit more time to iron out a few ambiguities in the rulebook. There is an extremely useful, extensive FAQ on the Twilight Creations web site; it contains a substantial number of clarifications to the rules which should help players immensely. I highly recommend downloading this PDF [2] for easy reference during the game:

The Battle For Slaughter Gulch seems a hybrid – part RPG and part board game. It captures well the cutthroat, competitive spirit of the Old West, as well as the feel of the Deadlands setting with it’s walking dead gunslingers and Hucksters performing miraculous magic using decks of ordinary playing cards. I found Slaughter Gulch to be a highly entertaining game that works best with four or five players. The “60 to 120
minutes” suggested playing time isn’t far off, but it will very likely take longer the first or second time through. The $44.99 MSRP may be a bit off-putting for some, but The Battle For Slaughter Gulch will provide hours of fun for any gamers who enjoy Deadlands, the Wild West, or just a fun, no-holds-barred, resource management board game.