Something Wicked and Hero Pack One Review 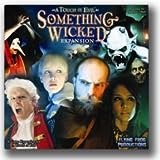 Expansions for the A Touch of Evil Board Game

I was destined to be a game geek. Back when I was but a wee Stevie, my folks introduced me to board games early. It was a fun and cheap family oriented activity we’d partake in when we could. My folks were big fans of the classics like Monopoly, Clue, Battleship and Trivial Pursuit while occasionally picking up a new “fad game” here and there like The A-Team, Pac-Man and Frogger.

As I got older and found ways of making my own coin, I started buying my own board games, the kinds that caught my interest more than the rest of the clan. These were games with more strategy and story/themes added to them, many of which you fellow board game geeks might recognize. Titles like Risk, The Omega Virus, Dragon Strike, Nightmare, oh yeah… let’s not forget a personal favorite of mine, HeroQuest and its expansion packs. My love of games in general led me to eventually discover RPG’s, which led me to start attending cons, which in turn opened my eyes to a ginormous cornucopia of gaming opportunities! And I dove in head first.

Today, as I sit and type this review before you, I’m a gaming geek in my mid 30’s, a geek who was lucky enough to marry a gal who also enjoys board games and I’ve spawned a single larva that’s already starting to join the ranks of the next generation of gamers. While they don’t quite share my joy of RPG’s, we all still enjoy pulling out the board games for some family fun. My daughter is now in her mid teens and like me, she’s started to enjoy board games that have more story and theme behind them. This made my black heart gush with excitement, for it means I was able to start adding story/theme games to my massive collection of board games again.

[2]My return to the “story game” genre started a year ago at a local convention. I got involved in a zombie apocalypse game called “Last Night on Earth” by Flying Frog Productions. It was well designed, well crafted and was so much fun that I picked up my own set AND its expansion pack “Growing Hunger”. While glaring at all the available board games at the dealer’s booth, I spotted a new game by F.F.P. titled “A Touch of Evil”. Looking over the box, it had all the right ingredients to catch my interest. So I went home with a bunch of expensive games, immediately pleaded for mercy from my wife as I spent way more than I’d planned. Once I was out of the dog house, we all sat down to a game AToE to see how fun it is. To put it in one word… “YEEHAW!”

I won’t go into details about “A Touch of Evil” itself. Billzilla wrote a very good review about this swank game back in March. While I love flapping my digital gums all day, I’m not a fan of beating a dead horse. So please, feel free to check out B.Z.’s review for more details in you haven’t already (click here to read it [3]). No really, go ahead and read it… I’ll wait till you get back, pwomise!

Now, onto the point of this review; two weeks ago I attended to latest local convention. And the same dealer who stung me last year had returned, and he came armed with two expansions for AToE. The large expansion is titled “Something Wicked” while the smaller box is titled “Hero Pack One” (which leads me to believe that more Hero Pack’s are on the way, but I digress.) And of course like the sucker I am, I purchased both without sets without resistance. As Billzilla mentioned, these are pricey games and no one wants to plunk down their hard earned dough on something that’s not worth it. So are these new sets worthy of their costs? Was AToE a fluke, never to be repeated? Let’s light a lantern and crack open this crypt, starting with “Something Wicked”.

First off, the quality craftsmanship of Flying Frog’s previous efforts immediately shines through again. More of the “Colonial America” setting, more heroes (and plastic miniatures for each one), more villains, more quality artwork, more thick glossy laminated cardstock, a greater variety of cards to create even more randomized actions… its all included amigo’s. With all this additional material, the expansion literally doubles the size and scope of the game!

There is also a new board that you place adjacent to the right of the original board (turning your square playing field into a rectangle). This board adds new locations like the Inn, the Monastery, the Bog, the Forgotten Island and the North & South docks to take you to and from said island. Similar to the first board, the road at the lower right goes off the end of the board and includes a note that reads “to the coast”, implying that there will be another large expansion in the future.

One of the best selling points of the expansion set is its new heroes and villains. The four new heroes include a militia captain, a monastery monk, a witch hunter and a monster hunting vampire. Like the main set, they each possess a list of stats and advantages unique to them and have their own story blurbs in the new rulebook. The new villains include The Banshee, The Bog Fiend, The Gargoyle, and my new favorite “The Unspeakable Horror” which is basically a cousin of Cthulhu. And like the original set they all have their own stats, minions to control and unleash upon the heroes and new ways of causing evil mischief.

Other highlights of the set included LOTS of new cards. They include cards for new items (bombs are a new favorite of mine), new locations and new events and mysteries to add onto the decks that came in the original set. The randomizing of these new cards are just as theme heavy and interesting as the originals; some of them are particularly helpful, clever or wicked and add new angles to the game play. There are new features like adding “resolve points” to the Town Elder NPC’s which help them survive longer or become more resistant to the temptations of evil. On the other hand, there is a new secret masked cult called “The Order of the Crimson Hand” who enjoys influencing the elders to work against your party amongst other things.

And speaking of newly added game play, there is a new fourteen page rule booklet included. Within it, you’ll find additional rules to spice up the game play (especially the cooperative game play) and new “Solo Play” rules for those who desire something wicked can’t round anyone up to join in. While my wife remains skeptic while she watched me give the sole play a test run, I found the mechanics worked well and was a lot of fun (although I will admit that its still more fun vanquishing evil with friends.)

Any issues to whine about? I have two worth mentioning, but they’re only minor gripes. The back of the expansion set repeats the first set concerning game time which is slated at 60-120 minutes. Don’t believe it my friends! It takes about fifteen minutes to set the board up and another fifteen to take down afterwards, and my average play time on solo play alone was between three and four hours. This works great if you’re playing at a con since most game time are slotted at these lengths, but if you’re looking for a quick game at home, I don’t see how you’ll find with AToE.

My second gripe are how the inlays are set up. Don’t get me wrong, as far as board game set trays go they are pretty well designed. But in this case, there are so many tokens and pieces to try and place throughout both boxes that it becomes a hassle. However, I found a solution that worked for me via the Hero Pack. And speaking of…

“Hero Pack One” is just that, a pack of new heroes. This box includes four new heroes to choose from (and their miniatures) a new villain and 10 new game cards to add into the various decks. I was concerned at first that these might be the heroes (and villain) that didn’t make the cut for “Something Wicked” and got dumped into this box. I hate sounding so cynical but this seems to happen all the time with expansions (I won’t point fingers, but you game companies know who you are and you know your shame!)

But I’m happier than a tornado in a trailer park to tell you that this was NOT the case! The new heroes are some of the best yet, including a foreign traveler, an inventor, a highwayman called “The Scarlet Shadow” (who’s become one of my favorites) and in a neat twist is the addition of “Lucy Hanbrook”. Lucy had merely been an “ally” when you could pull her card and didn’t offer much help (which was strange to say story wise as she’s the daughter of two of the town elders). But now, she is her own dog and a very capable hero. The new villain in this pack is “The Necromancer” who brings a “dead man’s party” with him wherever he goes. Last but not least is a new booklet that tells the story behind the new heroes & the villain and a list of FAQ’s and clarifications.

NOTE: For the issue of so many tokens taking up space in the large boxes, I found a solution. I took out the inlay from the hero pack, placed the tokens into more organized sets via Ziploc’s and then placed them in the box. Then I took the contents of the Hero Pack and placed them in the “Something Wicked” box where there was plenty of space for them. Perhaps it’s not the best way to deal with this issue, but it works for me.

In the end, I really hoped that something wicked would come this way, and it did! Both sets are worthy additions to an already worthy game. AToE plays like a “lighter” version of the Arkham Horror board game, because unlike Arkham’s sweet expansion sets, AToE doesn’t really evolve the game mechanics or requires you to change the way you think about the villains. This keeps AToE more in line with family game nights and casual players than the die hard types that Arkham Horror and similar games cater too. But if you’re looking to add something wicked with a touch of evil, you’re golden with these expansions.