Strange Dead Love Preview: A Plague for a Dowry

“No God commands me, yet I answer to a higher law than yours. My heart does not beat, yet it still feels. Only her word rules me, and only her smile warms my blood.” – J. Carlton, Nosferatu Harpy of Baltimore

Strange, Dead Love [1] is a new supplement for White Wolf’s Vampire: the Requiem RPG. It is guide to the themes and props of paranormal romance, custom-fit for the World of Darkness, specifically Vampire: the Requiem. This book features a collection of world shards, ready-made chronicles with their own plot hooks and rules. As well as advice for storytelling romance, including guidance on games for two.

Strange, Dead Love was written by Jess Hartley, Monica Valentinelli and Filamena Young. You can read the Flames Rising interview with the developers Russell Bailey and Eddy Webb [2] from October where we took fan questions about the book.

Flames Rising has an exclusive sneak preview of this new book with an excerpt called A Plague for a Dowry.

A Plague for a Dowry 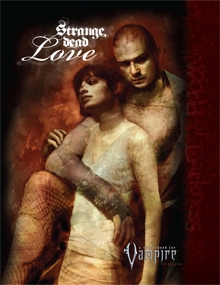 [1]This is a shard about sex, politics, repression, and maybe even a little bit of love. You’ll be playing rising stars in a city of Kindred who have a long history of making as many deals in the bedrooms as in Elysium. Now the Prince has, for whatever reason, declared that love, sex, and romance are illegal and punishable by death. Your Requiem is about to get tricky.

Secrecy, lust, and the thrill of illicit love should be the hallmarks of this chronicle. After all, one little law and the threat of death is hardly enough to make a city full of Kindred suddenly change the way they operate. Now it’s just a matter of being sneaker about it. It’s business as usual, just behind locked doors. The ever-present threat of blackmail makes everything that much more dangerous, and that much sexier.

A year ago, a Sanctified zealot with some crazy ideas about humanity and the cleaving of Kindred from human behavior entered the city. He declared that any sort of contact between Kindred that wasn’t a demonstration of power or devotion was a blasphemy. The Bishop found him overly zealous, but harmless.

It’s also long been known the Prince is heartbroken. No one can say exactly what caused it, but the wounds have been apparent in the lines of her face for nearly a century. Something shattered her, and she’s an empty shell most of the time. Despite the Bishop’s declaration, the Prince seems to have taken an interest in the zealot’s teachings. After a number of private meetings and confessions, the Prince made this strange belief city law:

“For the betterment of the city, any and all romantic or sexual behavior between Kindred is to be forbidden. There is nothing but suffering in the Kindred experience, and the mimicry of human blessings such as love and pleasure are a slight in God’s plan. Therefore, there shall be no more love, no more pleasure, and no more marriages.”

Now the city is in a quiet panic. Clearly they can’t ignore the way they’ve been doing things forever. The indignity of the new law is second only to the very real threat of death should they not follow it. Any liberties must now be taken in secret.

A number of characters would fit nicely into this chronicle, but here are a few ideas to really spice things up.

The Pretty Face: Before the law, she was arm candy. Just a pretty thing Embraced for her looks and passed around between Kindred of power in a fashion that bordered on humiliation. Now, though, she’s got something she didn’t have before: power. With the new law on the books and her old benefactors addicted to her attentions (and possibly her blood), she’s got leverage over them. After all, she can expose any and all of them as law breakers. While she too is guilty, being able to point fingers goes a long way with tyrants.

The Childe: The Prince is his sire. He was Embraced long after the heartbreak, and doesn’t know the cause of it, but he is desperate to ease that pain in his sire’s soul. Worse, thanks to the influence of that zealot, the Prince has spiraled further into self-loathing and depression. No else is close enough to try and change things, and any real gestures could get him killed under the new law. That’s probably not enough to stop him, though — after all, a childe’s love is sacrosanct.

The Penitent: She knows something about the zealot that would shock the Prince and the city. It’s something so terrible and so twisted that it would cast into doubt everything he’s said and done to influence this city. The problem is that she’s under conditioning that prevents her from even hinting at what she knows. She must find a way to expose the zealot for what he is without ever telling anyone else what she knows or what they should be looking for — no easy task.

Aside from the Prince and the Sanctified zealot, the city should be alive with freedom-loving, political, erotically-open Storyteller characters. Taking care of business was a business of its own, and while not everyone in the city should be a sex addict, a majority of the city’s vampires should be at least insulted that such a limitation would be forced on them.

Clandestine meetings supported by local Carthians intent on resisting the laws happen in many places throughout the city every night. The Circle of the Crone use Crúac to hide their blood bonds and emotions. The Ordo Dracul, limited in any research they might be doing on Kindred-to-Kindred social interaction, are up in arms. Even members of the Lancea Sanctum question the wisdom of forcing this sort of dogma on a city that might strain their covenant’s standing.

Blood Disease: Something is slowly killing the Kindred in the city: some sort of mystical disease that is passed by blood contact from one Kindred to another. Ghouls can’t suffer from it, and humans don’t carry it. The only way for it to be spread is by illegal sexual interactions between Kindred, so tracking down its spread and source is going to be next to impossible for city officials. It will be up to the coterie, working outside the law, to garner enough Kindred trust to stop the spread of the plague.

The Ties that Bind: Maybe most Kindred don’t realize the sheer number of “criminals” this city has due to the new law. Perhaps if there were a way to illustrate just how many members in good standing are at risk for death by the law, the Prince could be bullied into changing her mind. One answer is to trace the blood ties and bonds, and rumor has it that there are certain Crúac rituals or strange alchemies that can follow the lines of blood. The coterie must find the rituals, trace the complicated network of blood ties, and hope for the best.

Owner of a Broken Heart: As if things weren’t bad enough, the zealot starts preaching against nomads and shortly after, the Prince declares an open blood hunt on any foreigners attempting to make contact with the city court. Could it have anything to do with that long lonely look in her eyes? It might be worth asking some of the local Gangrel, but is it safe to ask?

You Can Pick Your Family

In this shard, characters can opt to join or leave blood lineages for the purposes of Blood Ties, Blood Sympathy, and the Taste of Family rules (Vampire: the Requiem, pp. 162-164). This shard also uses slightly stronger forms of those rules. Using these rules changes, a character may be part of multiple lineages.

To leave a lineage, a character must spend a dot of Willpower, and shed at least one point of Vitae. Immediately, all relevant characters may make Blood Sympathy rolls to know this occurred.

Blood Sympathy no longer carries the fifty-mile limit; characters may experience one another’s most potent moments from any distance. In addition, family members need not spend Willpower to force sympathy. The social bonus for Vinculums becomes +4. When using Taste of Family, a single success can identify blood from a known lineage.

Strange, Dead Love will be available in both eBook and Print formats at DriveThruRPG.com [1].