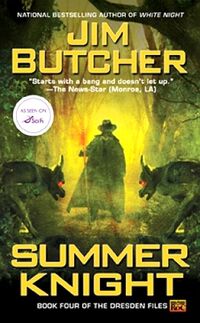 In Summer Knight, Harry is dealing with the after effects of Susan leaving. He spends day and night trying to find a cure for her vampirism. To no avail. Anger and depression are the mainstays of his life now. He doesn’t eat. He doesn’t bathe. He doesn’t see any of his friends, whom are really worried for him. Harry has isolated himself in a manner that is hardly healthy.

After meeting his friend Billy (and surviving both simultaneous attack from both a ghoul and a drive by shooting), Harry finds out that Billy has set up an appointment for him. Harry goes and meets the client, to find out that is is Mab, Queen of the Winter Court. She asks him to find out whom killed a man named Ronald Reuel. She also tells him that she now his purchased debt to Lenanasidhe, and she is willing to cancel the debt…after he does three favors for her. This is the first one and Harry really doesn’t have much of a choice. You do NOT say no, to the Queen of Air and Darkness, so therefore he is now the emissary for Winter.

So Harry has to find out who murdered Reuel, whom he finds out was the Summer Knight. Then he has to investigate both Summer and Winter to find the answers. He finds out there are six queens, three from each.

The Lady, the Queen, and the Mother. He met the Summer Lady Aurora, whom tried to get him to stay with her to ease his pain. He then met the Winter Lady Maeve, whom tried to seduce him. The funny thing is both of these were traps, just in different ways. Which show how dangerous both can be.

I have talked about in previous review, how much I have enjoyed the friendship between Harry and Karin Murphy. It really takes off here as Harry finally tells her what is going on in the supernatural world. Things have changed and Harry realizes that he needs her help. But in order for her to really help, she has to be clued in as to what is going on. He had wanted to protect her from this, but now he knows in order for her to stay alive, she needs to know. I loved this, and it shows how their relationship has grown over the series. She helps him fight off the Ghoul and a huge plant monster, but gets hurt in the process and has to drop out of the fight.

The introduction to the Summer and Winter court has brought a new dimension to the series. The Fae are immortal, and love to make deals with mortal. The only problem is, they are very deceitful, and mortal rarely get the better of them. But even beyond that, you have two sides of the same coin. The only thing they normally are worried about is each other, they are neutral on the affairs of others.

We also get a glimpse into the White Council a bit. Ebenezer McCoy was Harry’s mentor as a child. When the White Council wanted to execute him for the murder of Justin DuMorne. Harry had used dark magic to defend himself against DuMorne. Ebenezer then introduces him to three of the High Council. Listens-to-Wind, Martha Liberty, and the Gatekeeper. In the White Council Meeting, it is brought to it’s attention that the Red Court will stop the war if they hand over Harry. Harry is given once chance, he has to somehow get The Winter Court to grant passage. Or he will die. Also you get to really see how much the Warden Morgan hates Harry.

Then there is Elaine Mallory. Harry’s childhood sweetheart, whom he thought had betrayed him, but was also dead. She just shows up, out of the blue. Harry is really confused about this, cuz he thought she had betrayed him to DuMorne, but finds out she was under thrall to the wizard. Then he finds out she is the emissary of Summer and it gets even more complicated.

In the end Harry is betrayed, beat up, almost killed in a farie war that he stopped, avoids execution from The White Council, and kills a high ranking member of the Sidhe.

All in a day’s work.

I love the fae in these books. They are so different, but equally manipulative. I find this amusing, cuz if you aren’t careful you will assume that just because Summer is warm and friendly, that they aren’t manipulating you without you even knowing it. The plot of how the after effects of the Vampire War and this made for a great story. Adding some history with Elaine was a nice touch as well.