Sword & Sassery: The Source of Skullkickers

We have a new design essay from Jim Zubkavich about the Skullkickers comic series which is published by Image Comics. In this essay Jim tells us about his love of Dungeons & Dragons, bonding with his brother and how the game inspired the series.

Sword & Sassery: The Source of Skullkickers 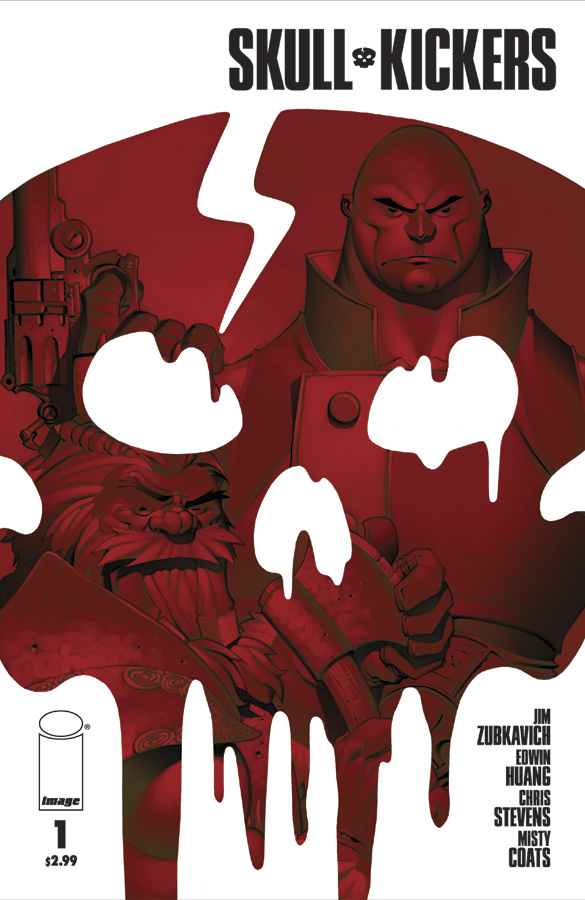 [1]Skullkickers, the action-comedy comic published by Image that I created, is the sarcastically loveable bastard child of many different sword & sorcery sources. From Robert E. Howard and Fritz Leiber to Tracy Hickman and Terry Pratchett, there are a slew of fantasy books by amazing authors that boil and bubble together in the cauldron I’m stirring, but above and beyond those literary sources is good ol’ Dungeons & Dragons.

Yup, Dave Arneson and Gary Gygax’s dice chucking combat miniatures game is the heart and soul of Skullkickers’ many hijinks and insanity.

Having said that, I want to make it clear that D&D play isn’t required to enjoy Skullkickers. It may help supply the blood that pumps through its veins, but it’s not insular or focused on impressing the reader with obscure stats and references to D&D canon. What Dungeons & Dragons did was to forge a paradigm in my brain about how fantasy was supposed to feel and what made it fun. Let me explain…

I started playing D&D when I was 8 years old. The now-famous red box set of rules came out in 1983 and my brother and I were introduced to the game by our older cousins. When you’re 8 years old anything older kids do is amazing, so the fact that my cousin Kevin could drink an entire can of Coke and then belch the alphabet made him pretty much the coolest person I‘d ever met at that point in my life. Mark and Kevin showed us the joys of Commodore 64 video games and Dungeons & Dragons and we were both horribly hooked. Hooked on games and hooked on fantasy as a whole. From then on we sought out fantasy novels like Conan and Fafhrd & the Grey Mouser, fantasy comics like Conan and Dr. Strange, fantasy movies like Conan the Barbarian and Beastmaster and fantasy video games like Gauntlet and… er, Conan. That Conan guy got around.

Before this my brother Joe generally didn’t want to hang out with his younger snot-nosed bro, but D&D was something we could do together that we both liked. Joe was the Dungeon Master and I was his eager pupil, waiting to be told which dice I had to roll and what viscerally violent reaction came from their results. The rules didn’t always make sense to us but we muddled through and figured it out as we went along. I was just happy Joe was listening to me for a change and that we could create a story about killing monsters.

And boy oh boy, did we kill those monsters – skeletons, goblins, kobolds, bugbears and fish people. All of them fell before the axes of Rolf, my little violent dwarf, Silverwood, the ranger or Victory Lion, the noble paladin. The body count and piles of treasure were enormous. Good times indeed.

Here’s the thing though, beyond just kicking butt, I realized that one of the things I enjoyed the most about playing D&D was my ability to make Joe laugh really hard. My brother has a façade of respectability and maturity, like we all do, but when he’s laughing and tears are rolling down his face while he can barely breathe, well that’s pretty much the best thing ever. I would surprise the crap out of him with strange asides and observations, throwing his plans for epic fantasy to the wolves time and time again. Every attempt for him to create a cohesive fantasy tale got sideswiped by the sass and stupidity I injected into the game. He’d act defiant about it at first, but eventually he’d start laughing and then it wouldn’t stop.

As we grew up and both became teenagers trying to figure out who we wanted to be, it wasn’t easy. There were new friends, different expectations and crazed hormones changing our behavior and interactions with everyone around us (girls!). D&D was the bond that kept our friendship intact.

In high school I moved on to a different group of gaming friends and that sass-laden attitude defined our games as well. I thought it was just Joe and I, but quickly realized it wasn’t. When you get a great group of friends together to roll some dice and tell a story, no matter how serious you try to be, the inherent silliness and sarcasm comes out unbidden. Storytelling is fun, the unexpected is fun and character interactions should turn clichés on their head and make people smile.

That joyful paradigm is at the heart of Skullkickers. Fantasy isn’t stodgy prophecies and magical items of unpronouncability, they’re a fun-filled romp that defies expectations; ‘Low’ fantasy instead of ‘high’ fantasy.

When you read Skullkickers, I hope that manic almost-out-of-control energy and adventurous spirit comes through loud and clear. It’s a thrill to bring that to our readers. If you finish an issue of Skullkickers and aren’t smiling, we haven’t done our jobs.

Visit Skullkickers.com [2] for the latest updates on this series.