The Age of Ra Review 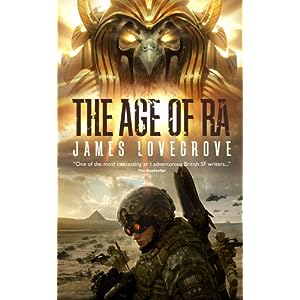 The Ancient Egyptian gods have defeated all the other pantheons and claimed dominion over the earth, dividing it into warring factions.  Lt. David Westwynter, a British soldier, stumbles into Freegypt, the only place to have remained independent of the gods’ influence.  There, he encounters the followers of a humanist leader known as the Lightbringer, who has vowed to rid mankind of the shackles of divine oppression.  As the world heads towards an apocalyptic battle, there is far more to this freedom fighter than it seems…

The Age of Ra has an interesting setting and reinvents the Egyptian gods in a very human manner full of flaws and failings. Events take place during the present day on planet Earth, but it is not the Earth we would all recognize. Around the time of Howard Carter, the Egyptian gods made themselves known to humanity and waged war upon all of the other human religions and deities that had ever existed. Once victory had been achieved, the gods then split the Earth amongst several of the more prominent members of the pantheon. Osiris, Isis, Nepthys, Set, Horus, & Horus’s children all then organized their territories around their worship and used those earthly assets to wage war amongst each other. The Exception to this is Egypt. It has been renamed Freegypt as part of a treaty amongst the gods whereby it was agreed that the birthplace of the faith should be independent from any one god’s rule. Human technological development has also been altered in that many of their devices and weapons are powered by the energy or “ba” of the gods.

The novel is also divided into two parallel story arcs. The main arc follows elite paratrooper Lt. David Westwynter as he comes to term with his own personal issues and the fallout of being swept up in the wars of the gods. After a botched mission, Westwynter flees to Freegypt and ends up coming into contact with the Lightbringer, a messianic guerrilla leader out to overthrow the gods and free humanity from their machinations. Westwynter ends up becoming part of the Lightbringers revolution and is forced to come to terms with his own personal issues.

The other story arc is very different. It follows the Sun God Ra as he interacts with the other members of the Egyptian pantheon. As king of the gods, Ra has a great deal of influence over his peers, but does not seem to actually rule over them and has no territory on Earth. Ra is a sympathetic figure; he is tired of the feuding between the gods and saddened at how all of their conflicts have spilled over onto human beings. As Ra attempts to broker peace amongst the gods, the Lightbringer’s revolution affects the outcome of his plans.

The Good:
I like Lovegrove’s writing style. His writing flows well and the narrative is balanced between the internal and external conflicts faced both by Ra and Westwynter. His treatment of dialogue is also well done and the characters speak and act genuinely. I was a bit put off by some of the over-use of British slang. Despite being a bit x-rated, I also enjoyed how the gods were depicted. Even though they are divine beings, their problems and motivations were understandable. Not a whole lot has been done with the mythology of Egypt and the novelty of having them featured was fresh and provided an exotic element to the story. I enjoyed the setting of the novel; the human nations were interesting and the integration of divinely powered technology into human science was unique. It was clear how the gods had influenced the cultures under their respective control. One passage in the book that depicted some Anubian commandos stood out as having been well done. This was a well thought-out and solidly constructed world for the story.

The Bad:
I liked David Westwynter as a character, but some of the focus upon his personal issues may have been overdone. Instead of coming off as a guy who struggles with taking emotional risks, he came off a like a kid at his first boy/girl social event. The culmination of the Lightbringer and his revolution was anticlimactic. It made sense and had some bite, but as far as resolving the story arcs of both Westwynter and Ra went, I found it to be a little flat. Too much was done too quickly without actually providing the reader a satisfactory resolution to what had happened.

Final Word:
This is a unique story in a unique setting. The characters are interesting and the novel reads fast and furious. However, I felt that the climax and ending of the book were a bit flat — too many things fit entirely too well for how things were worked out. I was also able to predict a good bit of the secrets revealed to the reader well in advance. I would not recommend this book for younger readers as there are a few sexually explicit scenes.