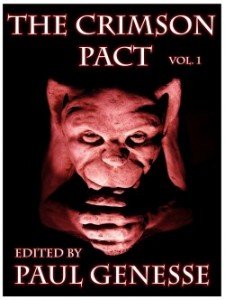 FlamesRising.com is pleased to present you with a preview of The Crimson Pact Volume One. Twenty-six authors wrote stories in this demon-themed eBook anthology and samples of three of them are available for you to read below.


Preview of The Crimson Pact Anthology

Part One: The Rusted Vale

News of our victory came not in the happy shouts of the freed multitudes, but in the groaning voices of the animate dead. Ours was a victory that none would confuse with triumph. The best half of us lay broken within the Rusted Vale, the rear guard left to puzzle out the events that had been no more than far-off echoes within the smoke and crashing iron. We knew only that we had finally won, that the Crimson Pact was redeemed, that we could all go home. Tired as we were, no man lifted a fist to celebrate. No Blessed Woman smiled. No church Catechist recounted the litany of our good fortunes. The cost had been too high, the wager of battle too awful. In that moment, winning didn’t seem to matter. It would not be long before we found that even the brief illusion of victory would tear away like fog before the wind.

We had to reanimate the dead to learn the terrible truth. When we could find corpses whole enough to take the enchantment, that is. Most of them lay in torn, unrecognizable chunks no bigger than a man’s finger. Our front line troops had been destroyed to a man. No living soldier remained to tell the tale. How had our enemies, at the moment of their apparent defeat, disappeared into a rolling, living explosion of acrid fire? What twisted plot had allowed them to lure us in, only to annihilate us and make good their escape? Only the dead knew.

The landscape, a blasted waste of flaming corrosion, would never again support life. Nothing wholesome remained. Trees were charred skeletons; grass had turned to ash; even the rocks were glazed with black, tarry soot that wouldn’t wash away. The comrades we brought back had known torment no human mind could bear. Wrenching them back into their broken bodies was a crime we will spend our lives trying to forget. They screamed until we were forced to pulp their heads with the burial spades, providing us with nothing but fodder for night sweats and drinking binges.

You begin clean. You begin with fine intentions and a cause. The ending is always burnt black, broken promises strewn about with the dead and all you had hoped to do slipping through your hands like the steam of your breath in midwinter.

Some of us were learning these truths for the first time, most of us merely being reminded. The Spirit Coaxers with their black candles and their guttural chants summoned the ghosts back into the broken vessels of our fallen friends. For those who had the power over death’s threshold, there was never so ill-favored a day. As bad as The Day of Burning was for all of us, it was the worst for the Spirit Coaxers.

Nothing could be done. We needed to know what they’d seen at the front, what had happened, how things had gone so utterly wrong. A few of them had seen the last awful moments. From beyond death’s veil, they remembered. Curse the gods, but they remembered it all.

It fell to me, General Cruek Ostor, to hear the gasped words of the dead. I carry every word verbatim, an entire army of nightmares within me, loose-ranked and mutinous, hollow-eyed as my own reflection after these many sleepless nights. Fragments of all the dead live inside me.

We are twenty, walking our ponies down a black road under cover of night, knee to knee. We are ghosts slinking down from the mountains, sneaking through Prison City, twitching at every sound. We don’t have a choice. We must eat, we must live. The world before the Apocalypse was a complacent world, a world in which choices were many and too easily made. Now the only choice is how you want to die.

I am the only one of us who’s not afraid.

Jav kicks his pony out of the shadows ahead and trots up to me. We pause in the dark while the others draw up around us. Jav looks us over quickly, counting the heads, then jerks his chin up the road behind him. “We’ve got trouble. There are eyes on the street.”

I follow his gaze, past the long shadow of the roofline above us, past the sign on the corner and the fuel pumps with their hoses lying in the dirt. The filling station is dark inside, the window glass broken. The door hangs from its hinges and trash is piled up around it.

Then it comes; not slowly, the way black of night fades into shades of morning grey, but there—quick, a flash, a glint of light on metal. It might be just the moonlight. A reflection on a countertop, an empty coffee can. Or it might be a rifle barrel.

Of the Breaking of Stars

[Transcriptor’s Note: I have endeavored to present this text in as close to accurate condition as can be reasonably expected, given the age of the original chronicle and the peculiarities of the original dialect. I have changed the wording only where it aids in the understanding of adages and idioms, and to standardize the names of those people and places that already exist in the histories.]

6 Charkani, Year of the White Crow
Another star died last night, the third this year. There was no warning, and I was busy in my workshop when it happened, testing the affinities of the pure watersilver that Batosh brought out of the ruins of Khet, so I did not see it happen. But I heard it, of course—who could not?—the sound of a thousand mirrors cracking, high up in the sky, and I came running out to the courtyard in time to see the cloud of shards dissipate into the aether.

I have instructed the household slaves to make fast what they can, to bring in the livestock and keep the children from straying outdoors. They complied without question, and not just because it is their place; all have heard the tales of four months ago, when the previous star died and the crystal rains fell upon the harbor of Duqra, on the far shore of the Unquiet Sea. What befell the folk there, the great pieces of starglass smashing the city’s palaces and walls, reducing its harbor full of proud dromonds to so much flotsam–it sticks in the mind.

And now, in the last month of the year, another star is gone. Unprecedented–the last time one disappeared was in the time of my grandsire’s grandsire. Now three in one year? It is more than a little troubling, but I have no theories yet as to why this has happened.

As soon as I could, I opened the roof of the observatory tower and trained my dispector upon the debris of the star–Othras, in the middle of Argath the Horseman’s sword-blade–and I took measurements of its movement for old Shai to study. When I gave them to him, the blind old man told me the rains might fall upon us, but the greatest shards would land in the mountains to the north. But I heard doubt in his voice, and fear that his command of numeromancy is not what it once was. I worry that he might have made an error.

Better a knife in your sheath than one in your ribs, as my grandfather used to say, so tonight I, my family, and the slaves will seek shelter in the cellar of our household. I hope I am seeing shadows in the sunlight, and Shai’s figuring was right . . . but I will not bet our lives upon it.

Promotional Trailer for The Crimson Pact

The Crimson Pact Volume 1 is available at TheCrimsonPact.com or any major eBook store. This preview was provided and published with the express permission of Alliteration Ink. [1]

[2] Preview of The Zombie Feed Volume One Anthology : https://www.flamesrising.com/zombie-feed-one-preview/