In Part 1 [1], my brother John and I talked about what Foreshadows: The Ghosts of Zero [2] is, how it came about, and just how its manifold parts collide. But just what’s in this thing?  We’ve been calling it dark science fiction, but what does that really mean?

Given that the music was first designed with cyberpunk [3] in mind, we didn’t want to deviate too strongly from the basics of that genre: dystopia, high technology, loners and hackers. And, of course, monstrous megacorporations. The world of Foreshadows is intended to portray our own future, no more than 80 years ahead, as seen through a darkly-tinted convex lens—or perhaps a 19-facet compound lens. And though it’s a fairly grim future, replete with wars, climate change, and the aforementioned evil megacorps, it’s in the individual characters and places that we’re most interested.  We’re not trying to compete with the likes of William Gibson and Neal Stephenson—nor showcase the full dynamics of myriad possible futures.  Try to forecast too much about future developments in the real world (be they technological or sociopolitical), and you’re bound to end up wrong about many of them. Strike that—most of them. Just look at the Jetsons!  So no, in Foreshadows, your car won’t fold up into a briefcase.  But you might just have an android house cleaner….

Since this is science fiction and we are moving forward through time, there’s a natural advancement in technology, which has its benefits and its hazards.  With cyberpunk, the Internet obviously plays a big part. It’s taken center stage fast and hard even in our own lifetimes. When some of us were kids, there was no such thing as the Internet.  Today, not only is there now a global system of interconnected computer networks, but an expanding percentage of Earth’s population is on Facebook or otherwise connected through social media. Education is moving online, people are replacing books with computers, and more and more information is entering the so-called cloud.  What’s next?  Will public libraries start closing down? Ask Rosemary Jones [4], author of “Deep In the Deep: Reaction-Diffusion Dies Tonight,” the anthology’s penultimate story.

Are we suggesting that technology is bad and always destructive?  By no means!  Though it’s certain to give the powers that be a faster or more fearsome means to destroy their neighbors.

“Whoever found it first

Would be sure to do their worst

They always had before”

In Foreshadows, both the good guys and the bad guys have advanced technology—and every story involves some level of high-tech by our present day standards—but good luck figuring out who’s good and who’s bad! And, oh yes, there are robots afoot.  More specifically, there are simulacra, artificially intelligent androids that look and sound pretty much just like humans. But they don’t really think like humans. Well, not always.

From the basic cyberpunk tropes mentioned above, the setting for Foreshadows began as fairly generic so the authors had plenty to work with.  Then, as each author started to invent places, technologies, and events, those were tossed into the playground for others to use, if they wanted to.  For example, once Ed Greenwood [5] mentioned something called the Second Multinational War in his story, then that became a reality that other stories might include.  Gradually, the world took shape, but only as much as it really needed to. 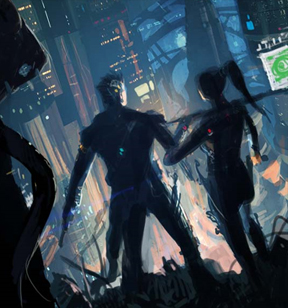 So what’s happened?  80 years in the future, we haven’t colonized other planets and we haven’t made contact with aliens—or who knows, we haven’t publicly made contact. We have severely messed with the climate, however, and wars large and small have rocked the planet. Some cities are destroyed, others have thrived. People have flocked to metropolises and places with abundant water and cleaner air, and the rich and the poor have only become more polarized.

So how about some examples of this dark science fiction we keep talking about?

Ed Greenwood’s story, “Best Served Flash-Frozen” (with music by Michelangelo [6] and Thee Crumb [7]), is about a handicapped tech-genius living beneath a war-ravaged and no longer hospitable city. He’s a forgotten sort of subterranean Quasidmodo with a score to settle against one of the most powerful men on the planet. Just why he wants revenge, and who it is, remains to be seen, but a small teaser can be read here [8].

In Don Bassingthwaite [9]’s “Too Much Is Never Enough” (based on music by Bilian [10]), the far north of Canada isn’t quite as frozen solid as it used to be, and an otherwise sparse tundra happens to harbor a globally popular sport called Stomp Brawl. His protagonist, Marco, is a unique competitor in the arena of Qingaut with a deadly agenda he’s not quite willing to accept. The first half of Don’s story (and half of the song itself) is actually available as a free download right here [11].

“Lament,” penned by Brian W. Matthews [12] (set to music by another cultural landslide [13]), is the story of an assassin with a serious and unexpected attack of conscience. And oh yeah, Mr. Matthews destroyed half of the city of Portland, not by the device of mankind but with nature itself. (Not everything’s humanity’s doing.)  With apologies to Portlanders.

Some stories have a great deal of violence—gunfire, stabbings, poisonings, explosions, and even the jaws of a would-be lycanthrope—while others have absolutely none. Jaleigh Johnson [15] and Rosemary Jones, known for their Forgotten Realms® novels, give us thoughtful tales of loss, while C.S. Lewis savant Robert Velarde [16] shows us what becomes of Cheyenne Mountain and the environs of Colorado. Manila has some interesting new occupants, courtesy of Joe Rixman [17], Ruth Lampi, and Jess Van Oort [18].  Eberron® creator Keith Baker [19] weaves a pretty nasty tale in and out of cyberspace, and Western/PI writer Robert J. Randisi [20] also lends his pulp expertise in “Cold as the Gun” (with music by Joshua Wentz [21]) in the overcast Orleans City. Of course, the lists and synopses go on.

Ultimately, we’re not setting out to predict the future, merely to imagine what sorts of events might come about if the world as we know it takes a turn for the…worse? Mechanized?  Foreshadows is a supposal, not so much for the actual state of the Earth as for some of the experiences within it.

Foreshadows: The Ghosts of Zero offers a future both dark and wondrous. But it’s also a very independent and experimental project. We’re a disparate band of artists combining cybermusic and fiction in unorthodox ways. If you’d like to see Foreshadows become a reality, please come check out Forging Foreshadows [22].

[2] Foreshadows: The Ghosts of Zero: http://foreshadows.net/