The Hobgoblin of Consistency

Frances Stewart writes and edits across various mediums, including for several games. Most recently, she contributed to Onyx Path’s Dead Man’s Rust [1], a mega-adventure that’s on Kickstarter right now! In this article, she talks about writing when you’re trying to clean up and maintain a complex continuity, while still being original and also modern and also entertaining.

The Hobgoblin of Consistency

The best thing about the Scarred Lands is the vast, sprawling, tangled, intersecting, contradicting, riotous heap of existing content: something like 30 books written by several dozen different authors under different developers and editors in about three years. It’s also a big, big challenge. Maintaining a continuity that was barely under control when it was first created could easily be someone’s full-time job, and…well, while Travis Legge (the magnificent line owner for the Scarred Lands [2]) does have that job, he also has at least two other jobs that ought to be full-time jobs, too. Seriously, the man never sleeps.

So, as a writer, I consider taking some of that load to be my job: know the continuity, research my areas, and (wherever possible) write my new content so that it fits with (and ideally even explains) the knotty, contradictory content that already exists.

So, what rules do I use?

Well, first, learn the existing content before trying to add to it. Mistakes cost less to avoid than to fix. This means a lot of reading and note-taking. Ideally, this is when you uncover problems: contradictory dates or locations, lore that just doesn’t make sense, or things that haven’t stood the test of time. If there’s new official content, that gets extra weight: newer content should usually overlay the older stuff.

Next, I start thinking through my plans, including the existing writing and any problems in it. Do my ideas fit well? What needs changing? Can I solve any existing problems? Ideally, as I’m planning I also coordinate regularly with any other writers on the project, especially with anyone whose content overlaps mine, making sure they know what I’m doing and that I understand what they’ll need from me. I also share with them what I’ve learned about the existing lore and its own contradictions. Where I can’t get in touch, I plan as flexibly as I can to leave room for the unexpected.

Ideally, I rough out my ideas into a draft I can give to the project’s lead. If there are issues or questions I can’t resolve on my own (either within my own section or across multiple sections), I reach out to my lead as soon as possible. When you’re writing on a project like Rust, always remember that your lead is effectively your customer—they get to make any big calls that change continuity. Once I have buy-off from my lead around any big problems, I can start writing seriously.

From here on out, we introduce another driving principle: what will be fun and engaging, both to play and to run? After all, that’s why we game in the first place. “Fun” is a huge topic all by itself, so I’ll focus on one tiny slice for this article, since it’s also an element of consistency: how can I design my content so that anyone running through it gets a clear feel for the Scarred Lands from it, but so it also leaves space for each played game’s version to develop into its own interesting and distinct universe?

That’s actually the hardest change to make from writing traditional fiction or video games: in both those cases, you’re telling a story. In RPG writing, you’re only there to lay out circumstances, not tell a whole story. You lay out threads for the players to pick up. You decide what will happen if the players don’t intervene. You think of different solutions and resolutions to each challenge, since each group playing enjoys different styles of play. 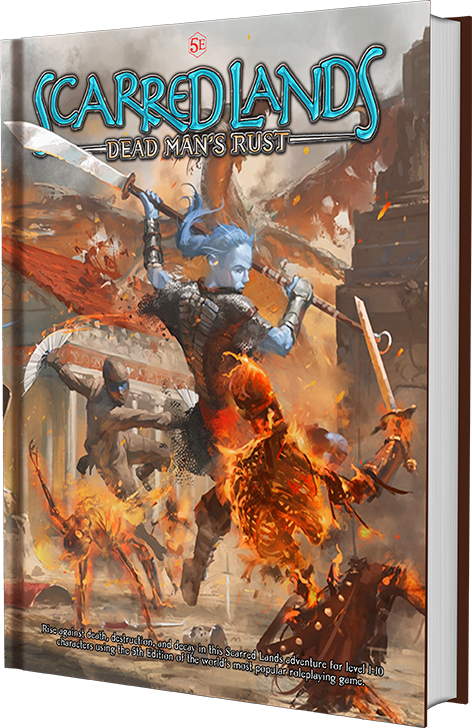 So a lot of getting that balance right is laying out the motivations and desires of everyone in the story. First, because that’s a huge part of what gives it the right flavor: Scarn has paladins who make tentative alliances with orcish farmers, rangers who defend carnivorous unicorns, and lawful good necromancers and liches. Knowing why they exist is vital to creating a uniquely Scarred Lands atmosphere.

Second, clear motivations reduce another common gaming problem: unpredictable players who either latch onto a random “red herring” instead of the main plot, or who come up with a completely unforeseen solution that undercuts the main plot. So long as the DM understands what the adventure’s major players want and what motivates them, the DM can react coherently to the unpredictable. Players block the main route for the Grand Council’s army? That’s fine—the army was just there to draw attention. While they’re celebrating their “victory,” the Council uses those celebrations to cover their coup instead of the army invasion.

Finally, once I’ve gotten all the background, NPCs, plot hooks, links between sections, stats, and extras in place, my draft goes off to the editors. If I’ve done well, I haven’t left them any big contradictions to clear up. If I’m lucky as well, I may even have cleared up some existing contradiction by creating a legitimate explanation for it.

If that sounds like a lot, it is. It takes a lot of planning and constant communication. It’s hard work, but it’s also enormously fun work. Especially when you have a talented, excited, engaged team like the one we had for Dead Man’s Rust [1]. We’ve taken an underdeveloped area (the Gleaming Valley) and not only fleshed it out, we did so in ways that smoothed the connections between existing lore from Third Edition books and the new 5E releases.

I can’t wait to hear from people playing the new content—and to see what you all do with it on the Slarecian Vault [3]. Because this isn’t a toy, it’s a playground. We all own the Scarred Lands together. We all tell its stories together.

[8] Pledge for my Extra Life Fundraiser and Get Scarred Lands Rewards! : https://www.flamesrising.com/extra-life-fundraiser-scarred-lands/