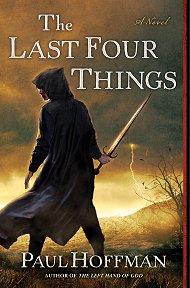 This is poetry! Even when it is prose… I mean, that the writing flows smoothly, honed turns of phrase that draw you in and create pictures in your mind.

The plot continues to follow, in the main, the exploits of Thomas Cale, who is now brought to prominence as the recognised – at least by some – embodiment of God’s own anger, his innate talent for violence being viewed as divinely inspired, and thus admired by an organisation as partial to using force to impose what they see as the will of God on others. Given privileges surprising to one of such young age and lack of experience, he is given battlefield command of Redeemer forces where his unorthodox tactics and personal leadership bring results… mirrored by turbulance in the higher echelons of the church hierarchy as plotters seek power and even the Pope’s throne.

It’s a compelling tale that sweeps you along, eager to find out how Cale will prosper, what will happen to other people – both those with him and those in subordinate plotlines based around some of the people he met earlier and who have scattered across the world. Ultimately the question is: given that Cale is the Wrath of God made flesh, will that wrath fall where the Redeemers expect?

The backdrop of the land is richly wrought, with a strangeness that is somehow familiar. This is in part due to the use of names – of places, of things – taken askew. The Ammonites are a people, not a bunch of fossils. Place names you can find on a map exist, but as somewhere else. Simmon’s Yat. The Quantocks. The whole sweep of the political situation is again both familiar and strange. Echoes of mediaeval Church involvement in matters secular, but wrought larger than even Rome dared, with regular military force used in true Machiavellian style as politics by other means. Internal struggles, of vital import – literally life and death – to those involved, yet unnoticed by the man in the street, who may just about realise that there’s a new Pope without a glimmering of what went on to ensure that the ‘right’ man got appointed… let alone what was discovered about the last one!

It’s an epic, sweeping tale in a land one would love to explore more fully (although maybe on holiday or viewed in a documentary rather than as a place in which to live!). Snippets of places, cultures, people that are glossed over yet are ripe with promise, somehow you feel sure that there’s more to be known about them even if it doesn’t suit the storyteller to talk about them just now… the feeling of ‘alternate reality’ is strong in this one, and you’re torn, longing to discover what happens yet knowing that once you’ve found out you’ll have to leave.

If you like worlds that have a life of their own, where you feel certain that there’s just as much life down other streets as there is down the one that the story takes you, you will enjoy this. You’ll also relish the knowledge that even amidst realms ruled by the powerful and remote, ordinary people can achieve mightily, affect the very course of events… and that all people, great and small, struggle with themselves and with their associates, shifting relationships, truly the human condition even in someplace that existed only in the author’s mind… until his words brought it to such vivid life in mine!

[3] The Gaki and Other Hungry Spirits Review : https://www.flamesrising.com/gaki-hungry-spirits-review/