The Tipping Point of the Zombie Craze

The Tipping Point of the Zombie Craze

The zombie genre, like all trends, waxes and wanes as excellent titles by talented people are drowned out by the cascading wave of others merely attempting to capitalize on the trend. It isn’t exactly difficult to understand why the undead find themselves coming and going through our collective consciousness, the themes and moods lend themselves to horrors and fears that have become all but ingrained into our very being. From the panic of diseases to the mutually assured annihilation of the species, the premise plays on the primal fears of the human experience.

From the onset, Outbreak: Undead.. The Zombie Survival Simulation RPG [1] has been focused on the passion of the story. Our team understands that the best horror stories aren’t about zombies, though they do make for a wonderful backdrop and catalyst. The core concept of surviving in a world where we are no longer in control is the locus of any relatable story. We also firmly believe in the concept of testing your own zombie survival plan with a focus on realism, while still remaining playable at the table. We’ve taken all of this to heart as we approached the development of the 2nd Edition of the game, now funding on Kickstarter [2].

These critical aspects of our design philosophy are important to us in our game design, so we’ll take a moment to dissect.

First of all we have the philosophy that zombies as ‘monsters’ in an RPG are actually boring, and certainly aren’t the core of what makes an amazing horror story. There are many permutations of infected opponents and many of them involve a strategy to combat. Regardless, most people will, at first, view this as a crazy core development problem for a zombie RPG. But we understand that just hacking away at zombies isn’t going to hold any players focus for very long. While we have a wide assortment of horror traits and opponent options to mix up your undead related content in the game, so much more of it is focused on the fundamentals of survival in a post-societal world and the interpersonal interactions and relationships that form as a byproduct of that.

Don’t get me wrong, we don’t lack a load of options for zombies. We wouldn’t be able to rightfully call ourselves a ‘Zombie’ RPG if we didn’t, which is why we provide a sandbox experience that affords you the ability to tell the stories you want to tell. From just using some of the basic templates provided in the Core Rulebook, to the twisted horrors of your own creation, onto fandom worlds you get to experience first hand in your own way, all the way to complete official settings released by the team with their own takes on the infected/undead to inspire you to explore further.

But more than anything, we take a strong stance in creating a ‘Survival Simulation’ where you can test your own survival plan with a confident level of realism while still being an enjoyable game to play with your friends. Our team consulted with professionals in fields such as medical, psychological, and emergency services enhanced by hours of research in order to develop our core character creation system, the SPEW-AI Personality Test [3]. This test was developed in partnership with professionals in the psychological test field and will allow you generate the core stats that allow you to play yourself as a character in the game.

The content found in Outbreak: Undead.. will grant you a plausible look at what your experience in the end times might be like. Of course, all of this still has to be playable at the table as part and parcel of this design principle, and that means we had to address how such a normally mechanically crunchy game designed to reward realism would be able to cater to gamers of all types. 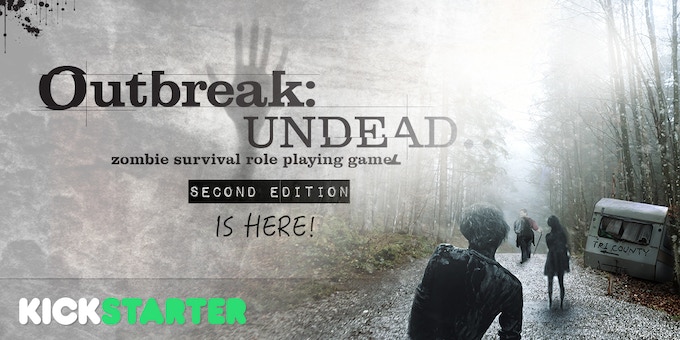 Because of this we have developed and implemented a number of design decisions that help to adjust the complexity of the game into something generally more manageable for players. This journey started with the development of Outbreak: Deep Space and has continued and evolved through the Outbreak: Undead.. 2nd Edition Starter Kit and supplemental products. The Core Rules for 2nd Edition mark the culmination of this journey with a more streamlined, visceral, and relatable set of rules and presentation. For the 2nd Edition, we are also introducing new “Modes of Play” that will allow players of different experience levels and play styles to enjoy the game together at the same table. This quick outline will give you a bit better of an idea of what we mean:

Arcade: This rules-light variation allows for a more run-hack-n-slash, pew-pew style of play. Simplified mechanics will make this ideal for those willing to sacrifice realism for less crunch or who are new to the game.
Weekend Warrior: Stepping up the realism as well as adding more toolsets, this is a happy medium between the rules light and the full ruleset. This works well for those with some experience with the game or other Survival RPGs.
Survivalist: The most extreme and ultimately realistic method of play, this makes use of the full breadth of mechanics and is a generally harsh and unforgiving way to play the game. Great for veterans of the game or someone looking for the full experience of Survival Horror.

On a final note, we must also point out the support and feedback of our amazing community of Survivors who have helped to grow and inform the direction of Outbreak: Undead.. as it transitions into the 2nd Edition. Your constant validation and honest reviews of our content allow us to continue to produce the award-winning products we have become known for.